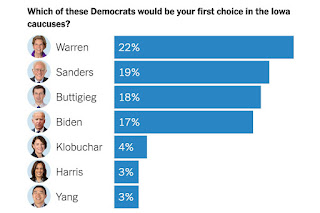 It appears that Joseph Biden's money troubles and the negative press due to his son has seen him drop to fourth in the tight Iowa poll for the Democratic Presidential elections.

By contrast, Elizabeth Warren leads at 22%, followed closely by Bernie Sanders at 19%, Peter Buttigieg at 18%, and Joseph Biden at 17%.  The rest of the Democratic field is polling at 4% of less and it looks like a four person race to be Donald Trump's opponent in the Presidential primary.

The New York Times has has an article that fully explains the Iowa poll and can be found-in today's paper.
Posted by Chaz at 9:19 AM

If you buy the conventional wisdom, Bernie and Warren are much too left-leaning to have a chance in a general election.

Biden - who some of us remember as an absolutely awful presidential candidate in his two other forays - is a feeble gaffe machine with a very strong whiff of corruption and certainly won't make it to the general election.

To be fair, with a strong economy and a shrinking war zone it would be an uphill battle to unseat a sitting president even with a respectable moderate Democratic candidate.

The latest incarnation of the Russian hoax certainly is not going to help - the same players again battling Trump is sure only to call attention to Biden and son and further discredit the Democratic brand.

Why not pass a few good laws in Congress, find a younger and moderate presidential candidate, take some lumps in 2020, and come back in a better position in 2024?

Bernie would destroy Trump. Progressives, independents, and a good amount conservatives support his messages and policies. The MSM, establishment Dems, and the super rich would rather have Trump win than Bernie. Without rigging, he wins the Primary hands down. In the general, he would fight for what he proposes while Trump is proven to be all talk about helping the working class, while boosting the rich.

The media rips apart candidates, investigates, scrutinizes, reports, and exaggerates every indiscretion (no matter how long ago), stalks family members, lies, creates stories, etc. I do not think this allows the possibility of any viable candidates on either side. Obviously any republican candidate will have it much worse because the traditional republican platform is contrary to the media propaganda.

Anyone with even an inkling of running will be put through the wringer. Why would anyone put themselves or their family through this?

I think from now on, we just will have to vote for the candidate who will cause the least damage. Unless, as Americans, we stop listening to the media and start reading and thinking for ourselves. Oh wait, I forgot. We can't teach that in school anymore.

Given his recent heart attack, Socialist credentials, and advanced age (78 right now - he'd be older his first day in office than Reagan was his last day in office) it is not a surprise Bernie's fading and stands no chance of garnering sufficient popular support from Democratic primary voters.

(I do realize that in some small circles Socialist credentials are seen as super assets in an election but, of course, the opposite is true in the Democratic primary and general election.)

Since he could not beat Hillary last time (who subsequently lost to Trump) there is no chance the elderly Socialist heart attack survivor will be aided by the Democratic party bosses.

The Democratic bosses and media power brokers know Biden (currently and unsurprisingly disintegrating) and Bernie are nonstarters and Warren is far too left for the general electorate so they are looking elsewhere...and praying Trump is wounded by the Russian and Ukrainian noise.

Polls show that only Biden and Bernie would beat Trump, Bernie by 5 points. Biden still gets the black vote for no other reason I can see (given his gaffes bordering on racism) than loyalty to Obama.

Yes, that heart attack really stopped him from doing anymore rallies. Funny that his "socialist" views are incredibly popular with the majority of Americans. His age? Let the older Pelosi retire before he gives up. And, finally, let's stop paying so much attention to the corporate-driven MSM who've been against Sanders since 2015.

Polls showed Clinton beating Trump handily 3 years ago. And what about Obama's loyalty to Biden? He's been very quiet about his V.P. If the nominee is one of the top three now, Trump easily and decisively wins next year. Most people are independents, and will not accept the communist garbage, and transgender-focused pandering going on by the Dems. Booker and Harris are fading fast, and the inconvenient truth for Mayor Pete is that Blacks and Hispanics will not support a gay man running for President. Unless the Fed deliberately destroys the economy, four more years of MAGA.

HAHA BERNIE shot was in 2016 when the DNC cheated and rigged it for a loser corrupt candidate. The dems need to rethink and just prepare for 2024 because all the false impeachments in the world will not beat Trump. Economy and our pensions are doing wonderful. If Bernie or any left wing nut makes it I am taking 100% of my TDA out of stocks before it tanks.

Even for you liberals here, if the media was fair and balanced all this hysteria and brainwashing would been gone, the media has been so divisive to this president and the country. The DNC needs more candidates like Mayor Pete and way more centered. The AOC's of this world are some of the reason the left has gone completely bat shit crazy.