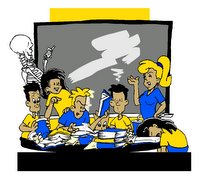 The Center for Public Leadership at Harvard's John F. Kennedy School of Government has chosen Mayor Bloomberg & Chancellor Klein as two of America's Best Leaders. According to the Center they were chosen because of their efforts in improving the public schools by stamping out "cronyism", reducing administrative costs, and partnering with private groups to improve the schools. Also mentioned was an improved graduation rate, streamlined learning programs, and a focus on the students, not the entrenched "interests" (teachers). Who made up this blue-ribbon panel? The panel included high-level leaders of various industries and interests. You can bet there were no teachers on it. Certainly not any teacher that has experience in the New York City schools under Kleinberg.

Let's look at what Kleinberg has really done to the New York City schools?

First, the NYC public schools have the highest class sizes in the State. In fact the Bloomberg administration is trying (and succeeding) in keeping a class size amendment from the City Charter. Is this a man who is a top leader for education? I think not.

Second, the Bloomberg administration has stated that they will not contribute a single penny to the expected windfall of billions of extra dollars for the New York City Public Schools in the CFE lawsuit. This refusal of the city to contribute it's fair share of school funds (about 25%) is unreasonable and mean-spirited and is inconsistent with a mayor that wants to be known as the education mayor.

Third, the mayor's refusal to pay a competitive salary and to treat his teachers as mere drone workers result in a lack of quality teachers in the NYC public school system. Every study has shown that a quality teacher is necessary for needy students to be successful in school.

Fourth, under Chancellor Klein, the emphasis is recruitment over retention. In other words why pay an experienced teacher when you can get two novice teachers for the price of one? So what that the new teachers have a steep learning curve of three to five years before they become an effective teacher, by then they are disillusioned and leave only to be replaced by two more newly-minted teachers. To make this point, only New York City has an intergalactic job fair where teachers from other countries and alternative certification programs can find teaching positions, while experienced teachers are relegated to day-to-day substitute teaching in their home school.

Fifth, Chancellor Klein's emphasis on not enforcing the student discipline code by penalizing schools that suspend these students due to the school's zero tolerance policy result in more chaos in the schools. Further, the DOE's policy to require violent felons to return to their own schools where they can be with their friends and terrorize the student body also is not consistent with a person who places the children first.

Finally, the micromanagement, the top-down decision making, and the disrespect of the teaching profession show how cluelees both men are about education in the terenches.

Class size - Failed to reduce class size and in fact opposes an amendment to reduce it.

Quality Teacher - Emphasis is on recruitment not retention of quality teachers.

Teacher Respect - Top-down decisions and micromanagement are symptoms of disrespect.

Do Kleinberg deserve the award? Not if you are a classroom teacher because in the real world of the classroom the Kleinberg policies represents a "children last" approach.

There had to be a sweet little deal made with city and ETS in regards to PSAT. Why else would all 10th and 11th graders be given PSAT now? That was a big money maker for someone! I smell a rat somewhere. I think its cronyism at its best!

The crap that passes for truth nowadays just boggles my mind.

Unfortunately, there's more spin than truth around these days. Truth doesn't sell media time or increase readership of so called "news"papers,spin does. By the way, the hell with Hahvahd.

This leadership seems to me doubtful. There are other organizations that have done much more for education, but I will not be advertising anyone here.