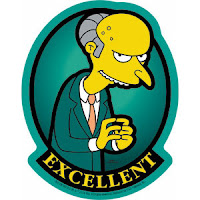 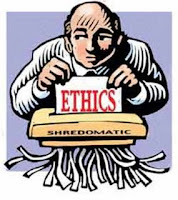 Tweed's double standard on investigations just keeps on showing up. Now it is the Deputy Chancellor, Christopher Cerf who did some serious wrongdoing and received a slap on the wrist from our glorious Chancellor. A Daily News Article by Juan Gonzalez reported how Deputy Chancellor Christopher Cerf had violated the City's Conflict-Of-Interest-Law by pressuring executives of his former company. Edison Schools, in giving $60,000 to the DOE supported Wilderness Program. The Conflict Of Interest Board gave Cerf a confidential letter admonishing him for using his City position to benefit the Wilderness Program.

The Board's letter was based upon an SCI investigation and report. However, neither SCI or Tweed advertised the report and hoped that nobody would notice. Interestingly SCI Chief, Condon, who is never shy about announcing investigations of low-level school employees, sent an 11-page report on Cerf to Chancellor Joel Klein in August 2007, but never made it public. Can you guess why?

The SCI report found the following about the relationship between the Deputy Chancellor Christopher Cerf and the Edison Schools. Cerf relinquished 6,000 shares of Edison stock in February 2007, only hours before he was to be questioned about his ties to Edison by the DOE's parent advisory council, Condon concluded. Cerf also renounced any interest in a 10-year consulting contract with another Edison-connected firm - a contract that could have been worth $2.5 million.

When SCI investigates a teacher and substantiates anything, no matter how frivolous, they always demand termination and the DOE proceeds with 3020-a charges and a full-fleged attempt to terminate the teacher. However, if you are the Chancellor's friend, a confidential letter to "cut it out" is all that is required.

As they bring in more and more outside agencies to run the schools there will be more of these conflict of interests issues. In my school which is sinking when the newbie teachers jump ship they apply for positions with the none-profits that have "reoragnized" our school and come back as "consultants"

Right you are, this week a 25 year veteran teacher faces disciplinary charges for 5 hours of per session that the SCI using Easy Pass info claims that the teacher did not show up to teach a home bound student. The investigators never spoke to the student or the mother, but yet made a conclusion of guilt by using Easy Pass records. by the way, the teacher has several easy pass cards and did in fact teach the student and did not travel home using his car but stayed at his in laws house in Brooklyn. But for 5 hours faces disciplinary charges. There should be a ground swell against this double standard, and the DOE and its confederates OSI and CSI should face public scrutiny.

Just goes to show ya--accountability, like taxes, is for the little people.

It just goes to show us that the higher ups at Tweed are not accountable for their own actions.

Klein will cover up his friends for their wrongdoings, but if any teacher stands up and seek legal remedies from court systems, he or she will find oneself banished to the rubber room very quickly.