The DOE “Double Standard “Tweed Removes A Teacher For Her Prostitute Past While Leaving Accused Sexual Molester Administrators In Schools. 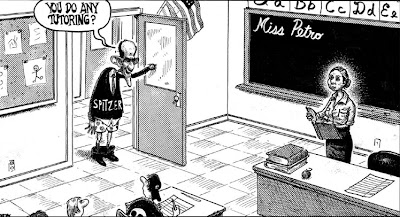 The New York Post headline on Monday showed a public school teacher, Ms. Melissa Petro” who had admitted on her facebook page that she advertised as a sex worker (prostitute) on Craigslist before she started her teaching career. The DOE immediately removed her from the classroom and reassigned her, pending an investigation. According to Tweed she is now considered “a threat to the children” and it does not matter that she provided this service years before she started teaching and no children were involved in those services she provided.

On the other hand much more dangerous administrators who have been accused of sexual assault and harassment, one , Assistant Principal Michael O'Herlithy of Manhattan Comprehensive Day and Night School, with a boy that resulted in his defrocking as a Priest, are allowed to continue in their posts. Here, Here, Here, and Here. With regard to the Principal of Fordham Leadership Academy, Richard Bost, Chancellor Joel Klein, who claims “zero tolerance against educators that commit sexual acts” overruled the local Superintendent who had removed the Principal and sent the Principal back to his school. I guess it is "zero tolerance" for teachers and not his favored administrators.

The hypocrisy by the DOE is almost laughable. The presume teachers are guilty while administrators are innocent. If that is not a “double standard” what is? The DOE lawyers are the same people who remove a teacher from a classroom and claim they are “a threat to the children” and then extorts them for $5,000 and a course. After they pay the extortion, these teachers are no longer “a threat to the children”. Unbelievable! You just can’t make this stuff up.

The DoE's version of children first, means that they will be screwed first. Second, the DoE screws the teachers.

I was thinking it was probably because she was tweeting and posting about her past life on the internet, and she also was in the classroom WITH the kids, day to day, and the that maybe the administrators whom you mentioned were not doing those things? Removing her was a good thing. Now the other two should be removed too.