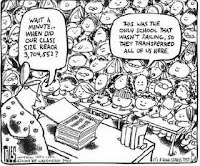 After watching Oprah Winfry fawning over "Waiting for Superman" and how the show blames the teacher unions for why schools don't work. They had a panel of ed deformers like Bill Gates, Michelle Rhee, and the maker of "Waiting for Superman" that was simply a teacher bashing session and a Charter school lovefest. Randi Weingraten was seen on a videotape and gave her usual wishy-washy defense of the system and was a weak counterbalance to the education deformers. While these education deformers were quick to blame teacher tenure they failed to explain that it is the Principal that grants tenure. If the teacher is that bad then why did the Principal grant that teacher tenure? It is time to expose these education deformers for what they really are, elitists that want to pick and choose students while demanding money from the public trough. Let's look at the issues the education deformers don't want the public to know.

Too many educators the most important criteria for improving academic achievement is class size. However, the education deformers ignore class size because they know that Charter schools usually have much lower class sizes than the public schools. In New York City class sizes are the largest in the State and rising, thanks to an underhanded secret deal between Chancellor Joel Klein and New York State Education Commissioner Stiener to allow for an increase in New York City Public School class size despite money that was to be used to lower class sizes under the C4E lawsuit in 2007. An article by the Daily News Juan Gonzalez tell how the City used the money to reduce class size into a Tweed slush fund is a must read.

The education deformers are always preaching how the children need "great teachers". However, the latest studies show that it takes eight years for a teacher to reach their peak and at least three to five years for a teacher to master the classroom. However, many of the Charter schools are populated by the "two year wonders" Teach For America non-certified novices. They never stay long enough to be a "great teacher" . The high teacher turnover rate at Charter schools is another dirty little secret that the education deformers want to hide from the public.

Great parents are the most important criteria for academic success for students. Is it any surprise that solidly middle class areas, where the parents expect there children to do well academically, no Charter schools exist? To ignore the parent factor is downright disingenuous and just plain wrong. Here Charter schools do have an advantage since parents who don't monitor their child's academic progress are unlikely to apply to a Charter school or spend the hours required to volunteer their services. Only those parents who want to take the extra effort to ensure academic success for their child are part of the Charter School.

Remember, to get into a Charter School the parent or guardian actually has to file an application and in many Charter schools the parent and child must go through an interview process before being accepted. Furthermore, the Charter schools are reluctant to take "English Language Learners" and Special Education students. The few that are accepted in the Charter Schools usually have a very mild case of either language or disability and can be placed in a regular classroom setting with littleor no additional services. In communities where Charter schools are located the neighborhood Public School have a much greater percentage of "English Language Learners" and Special Education students.

The majority of Charter schools have a homogeneous population and would appear to violate the 1954 Supreme Court ruling of Brown vs. The Board of Education. However, education deformers seem oblivious to this segregation based on race, gender, and culture. How they get away from this is that the Charter schools have big money supporting them (Bill Gates, Warren Buffet, hedge funds, Barack Obama, etc) and ignore the apparent violation of the 1954 Supreme Court ruling.

When these education deformers tell you how great the Charter schools are. Please bring up this article and show them how not only is it not true but that every public dollar that is given to the elitists who run the Charter schools take away needed funding to the Public School system.
Posted by Chaz at 5:09 PM

See the trailer of GEM's response to WFS at Ed Notes, GEM and a special blog set up for the movie we are doing (out late October.)

Rather interesting place you've got here. Thanx for it. I like such themes and anything connected to this matter. I definitely want to read more soon.

Charter schools are a diversion from the real problems fsced by the teachers.

Bullying and abuse by administrators, lack of due process due to the Rubber Room Sellout/Agreement, The existence of a massive ATR pool.

How about working without a raise? When the bald pimp makes deals he sells us out.

After all the abuse the teachers are getting at the hands of the pravda press, it's time to have a nationwide strike.

That strike is the only means that teachers have to stop the madness.

Our only strength is to do what organized labor is supposed to do, and that is to fight for our pay and working conditions.

Imagine teachers bringing the nation to a standstill.
The time was ripe a decade ago.
The Taylor Laws be dammned. They are unconstitutional and unamerican.