Why Didn't Bloomberg Demand The Removal Of These Administrators Along With Melissa Petro? 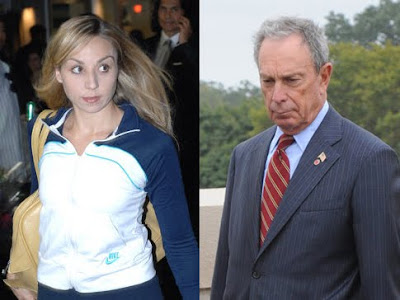 This post is a follow up of my previous post on the "double standard" when it comes to disciplining teachers and administrators by the DOE. Now it seems Mayor4life, Michael Bloomberg personally ordered the suspension of prostitute turned teacher, Melissa Petro. However, the Mayor4life has ignored administrators that have been accused of sexual misconduct and has allowed them to continue in their schools.

The first is Principal Richard Bost of the troubled Fordham Leadership Academy who has been found by the DOE's Office of Equal Opportunity (OEO) that he sexually harassed and grouped a school Secretary and harassed other female teachers in his school. According to the New York Daily News, a new OEO investigation was started concerning additional sex harassment charges.

The second is an Assistant Principal, Michael O'Herlihy, who was defrocked as a Priest and later sued by a former student who claims he sexually molested him when he was 16 years old. This was reported by the New York Post. His last school (he could still be there) was Manhattan Comprehensive Day and Night High School. These two admainistrators would appear to be more a threat in the schools then Ms. Petro. However, Mayor4life Michael Bloomberg appears unconcerned when it comes to them.

What is most disturbing is the media's failure to question why the "double standard"? I understand the Daily News and Post would not bring this up since they do not want to embarrass the Bloomberg/Klein Administration but why not the New York Times? local news media, How about Gotham News? other education bloggers? It is very important that the hypocrisy and unfair discipline procedures are exposed for what they are. While I do have a problem with Ms. Petro's past occupation, she is less of a "threat to the children" then Principal Richard Bost or Assistant Principal Michael O'Herlihy.
Posted by Chaz at 6:07 PM

The media has the same double standard because the media is controlled by Bloomberg and his ilk. Bloomberg is lord of all he surveys. Her dismissal is by his decree. Never mind Haggerty and all that other unethical/criminal baggage in the Bloomberg administration.

What about the principal from the school where the little girl drowned this past June. He receives extended probation and the A.P. gets bumped to a teaching position in the very same school? Or the principal from Bronx Science.?
The list could be endless Bloomberg fires employees and protects management period.

What about Bloomberg himself who settled numerous sexual discrimination claims by over 50 women from Bloomberg LLP? Why made all these settlements if there are no merits on any of these seperate claims made by these women?

Possibly the difference is that she admitted it and the other cases charges had to substantiated?

Well, Bloomberg is surrounded himself with lawyers, while that stupid girl did the bragging.
The Common sense dictates that something unbecoming of a mayor occurred when over 50 women filed seperate complaints over a period of many years. Again the money can make your trouble quickly go away.

Time attendance system is generally used by corporates to keep up to date record of their employees. The System counts the log in time, log out time and total working hours of employee. System also keeps the track of employee's leave which he/she has taken and at the end of month System gives the total no of leaves and working days. Time Attendance System is available with various facilities like Finger Print Access, Face Recolonization,Card Reader.Time Attendance System is very helpful to improve levels of efficiency of staff.

I find it unbelievable that nobody is picking up on the obvious hypocrisy by the DOE on how Melissa Petro is treated and the administrators who were found to have committed sexual misconduct.