How Tweed Goes About Starving Jamaica High School. A Once Great School And Then Demands That It Should Close 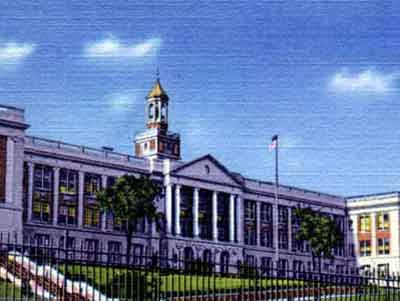 This tale is about Jamaica High School, a large comprehensive high school in Queens that was targeted by the DOE for closing, except the UFT filed a lawsuit that the rules were not followed and a judge agreed. Therefore, Jamaica High School and 18 other schools received a one year reprieve. However, this did not stop the DOE from starving the school for resources and put three schools inside the building. Finally, anybody who had selected Jamaica High School last year was offered an alternate placement which frightened off the parents from sending their children from going to the school. Since that time it is important to see how Tweed has discriminated against Jamaica High School.

Budget Reduction:
This year the DOE budget for Jamaica High School was reduced 27% (8 million from last year's 11 million) to a point where the Tweed selected Principal (known as the Undertaker) originally refused to sign off on it. Of course he eventually did. This reduced budge resulted in a reduction of 24 teachers an average of three teachers per subject to be excessed and sent to other schools as ATRs.

Jamaica was left with students that were not selected by other schools, late registrars, and students that were released from penal institutions. Sometimes known as the kids nobody wants. This tsunami of barely functioning students put a tremendous strain on both the remaining teachers and the meager resources that were available for the students at Jamaica High School.

You might think with less students going to the school there would not be a class size issue. However, Tweed reduced the budget so much that it resulted in more excessed teachers than what it should have been. Therefore, Jamaica High School had an astounding 83 class size grievances. As the school gets squeezed by the three small schools and has less students, the class sizes just keep going up.

To ensure that Tweed's wishes are followed. the DOE has publicly called Jamaica High School a "failing school" and even told prospective students that the school is likely to close and recommended that they go to other schools. Furthermore, the DOE takes every opportunity to label Jamaica High School as a failure and there public relations blitz just never stops. Even when the school gets some favorable press. It is not widespread and cannot hope to fight the Tweed propaganda onslaught.

At present, Jamaica High School has obsolete classrooms, peeling walls, and starved for resources. By contrast,the three small schools located in the buikding has the newest furniture, the latest technology, and freshly refurbished classrooms and hallways. Is this fair? Of course not! Nothing the DOE does is fair and this is just another example of their "children last" program when it comes to Jamaica High School.

This is the way Mayor Scumberg operates. Scorched earth, anything goes mentality.

How do you think he made 20 BILLION BUCKS?

700 students destined for Jamaica are assigned to go to Flushing High School, in Northern Queens. The only way to get there is by Bus...with 1 transfer.

Instead of being sent there, they could have gone to Queens Collegiate in the same Jamaica building, and also the new Queens Metropolitan Campus on Metropolitan Avenue.....

But no, there is no secret to what Tweed wants to do with these kids, throw them to the 4 corners of the Earth, and at the same time state, "We are giving them a choice instead of a Dropout Factory" and whether they really drop out or not due to their extensive commute, all the injustices and discrimination against those who have the least continues unabated, as no one has yet to take the pitch and fork to ask for justice from the suited people are Tweet and mostly to Bloomblock and his scamster of a Chancellor, Heir Klein.