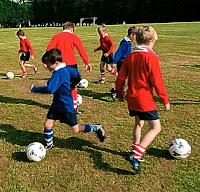 The DOE continues to slowly starve the schools by cutting off much needed after-school programs and incredibility, in some District 75 schools, started charging 25 cents for milk that historically was free. Tweed continues to "nickel and dime" the school budgets and forces the Principal to make difficult choices in how to spend their ever-shrinking budget.

In the last two years Tweed , in their "children last" program has allowed class sizes to rise, in violation of the CFE agreement to reduce class size and also reduced school budgets by 12% and this does not include an additional 7.7% reduction by the next school year. Today, the New York Daily News reported that the City has decided not to fund many after-school programs like tutoring, Saturday school. and clubs. This can best be summered by a quote from teacher Tom Porton.

"I feel like the principal has to pass through a toll booth manned by the DOE with a key to the building in one hand and a hungry wallet in the other," said Porton, who works at Monroe Academy for Visual Arts and Design. "In my 40-plus years in this system, I've never heard of something so outrageous.


In addition to the elimination of many after-school programs, the DOE has also limited use of the schools to 6pm in a money saving attempt to limit overtime. After 6pm, the schools would have to fund activities from either their own budget (impossible) or allow private providers to fund events that extend beyond the 6pm cutoff time. Unfortunately, these cuts are not part of the anticipated 2.7% budget reduction that the Bloomberg Administration wants from the schools this year Yes, the schools. Does anybody really think it will come from Tweed's every expanding ranks? I don't and neither should you.

Until and unless the union and parents file a lawsuit to make sure the ever dwindling budget is spent properly and fairly, I see nothing being changed as Tweed continues their "Children last" and "Education on the cheap" policies.
Posted by Chaz at 8:25 AM

I believe I read that the DOE is placing principals in the unenviable position to have to cut safety agents for after school programs. That is a violation of any school plan as agents must be provided. Is this so and if true there should be safety complaints filed Article 10.

It would appear the media is turning a blind eye to this issue as well. What else is new?