Cathie Black Given Waiver Despite Being Unqualifed For The Position Of Chancellor. 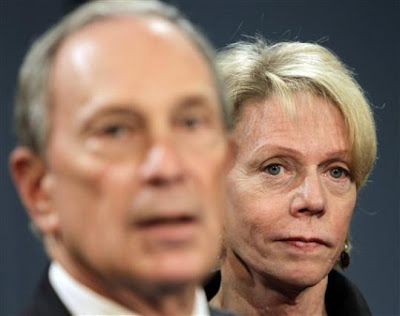 New York State Department Of Education Commissioner, David Steiner, has granted a waiver to Cathie Black to be the new New York City Chancellor despite the objections by educators, parents, and politicians. I guess I can now apply to be CEO at Hearst Magazine since I am just as qualified running a media company as Cathie Black is in running the New York City Schools.

It appears to David Steiner that over 15,000 signatures of an online petition by New York City educators, parents, and politicians opposing the unqualified Cathie Black as Chancellor is not as important as what our Mayor4Life, Michael Bloomberg wants and that is a shame.

I always thought the Mayor really cared about the children but he was clueless what actually worked in the classroom. However, it is quite apparent that Mayor Mike only cared for himself by selecting an unqualified fellow businesswomen who is in his inner circle in society rather than an educator to lead the New York City School system. Children first? I don't think so, it is Mayor Blooomberg first and the New York City Public School children last.
Posted by Chaz at 5:59 PM

I do think that Bloomberg cares about the classroom - but not like us.

I think there's a vision with privatization, with separate systems working in different types of neighborhoods, where the majority get training in test prep, sitting still, and not asking questions... With temporary teachers, non-unionized or unionized in name only... without rights...

Let's stand in the way.

Cathie Black was hired because she has experience in managing a huge corporation. Her main responsibilities will include ruthlessly cutting costs and updating the school system. Bloomberg wants to run the schools like a corporation and that's why she was hired.

All he thinks about is the bottom line.

I agree with both of you.