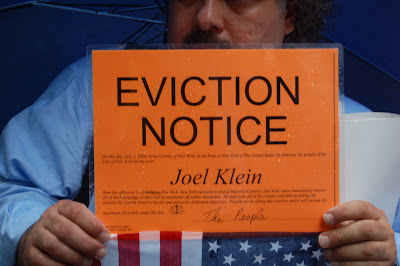 Finally, the day almost every classroom teacher has been waiting for, Chancellor Joel Klein has resigned. Oh happy day. Gone is his anti-teacher rhetoric, pro Charter school policies, and the top-down management that resulted in little or no student academic achievement during his eight year tenure.

Already, Mayor Bloomberg has appointed another non-educator for
Chancellor and that brings up the possibility that Joel Klein was forced out after his claims of academic improvement was found to be all "smoke & mirrors" once the State's 2010 scores were released. Moreover, his resistance to closing the "rubber rooms" which has caused considerable embarrassment to the Bloomberg Administration resulted in the City overruling the DOE and negotiated a deal with the UFT. Finally, Joel Klein's low popularity numbers with the public and his relationship with both the State Legislature and the City Council was antagonistic and many of the City's education proposals were ignored or rejected because of their dislike of Chancellor Klein.

Well, Michael Mulgrew this is the time to demand that the Chancellor be an educator, Haven't we seen enough damage when non-educators run the City schools? How about some real guts and not just weak rhetoric. We will be watching closely how the union leadership reacts to this one-shot opportunity to make sure an educator is returned to head the schools. We will be watching very closely.
Posted by Chaz at 3:53 PM

Cathy Black, once head of Hearst Publishing, a HUGE media CEO type has been hired. NON educator ALl THE WAY...let's see...what does a magazine gal have to do with public education . . . ???

Just the removal of DeKlein for the time being must give most of NYC teachers some visual pleasure.

Time to roll up our sleeves and see what CB brings to the table. I am betting it will be pretty much in the same vein as DeKlein, but without the ugly rhetoric.

But, watch the actions and you will see that not much has been changed.

I'm with Invictus on this.

The policies will be the same.

A more palatable version for awhile. CEO, corporate trend continues. One of Bloomberg Upper East Side cronies no doubt, and another gateway for certain industries to cash in on the riches to be made when they privatize education here. Education is ALL about publishing, so this publishing honcho will smooth the transition.

It's a shame he wasn't taken out of Tweed in handcuffs.

This Black lady won't be any better.

Lucky DeKlein didn't see a flying size 20" shoe on his way out. As QTeacher said, he is certainly lucky not to have been taken out in cuffs. That would have been priceless!

The problem with trying to figure what is going to happen is that you cannot believe word one from Bloomberg and any of his people. My gut tells me somehow this entire move has to do with Bloomberg running for President in 2012. Maybe just maybe, he wants uft/aft backing and this new care taker will play nice. Anyway, give credit that the atr's while in a bad situation have not been fired. A parting shot to Klein.

I am sure that Cathy will get a warm welcome from Unity and will work with Unity to further destroy tenure and 3020-a.
But what can we do? I think we have to stop acting like sheep going out to slaughter. We have to reject Unity, I said reject Unity and not use their staff or NYSUT lawyers. That is the only way to gain your independence and their respect. I have not met a teacher-even teachers who lost their 3020-who were disappointed with their decision to hire a private atty. I sure am happy.
But Chaz, your apparently using a NYSUT lawyer. What have you been drinking!

I don't know how much power the union has in making sure the next Chancellor is an educator but since Bloomberg nust get a State waiver, the union should do its best to block it.

That's the point. If the union publicly objects to Ms. Black and demends to show her educational qualifications, the State might be reluctant to grant her a waiver.

What if we teachers write to the state ed dept. without waiting for the union leaders to do so. Maybe they will follow along. To whom would we write?

There is already a petition going around asking them to deny her appointment....Look for it in Gothamschools.