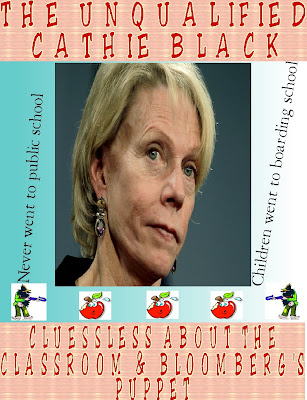 In what could not have been shocking to anybody who understands what is going on at the New York City Public Schools, Cathie Black's approval rating was 17%!. Actually I was somewhat surprised that her approval rating was even that high since she has taken over the reins at Tweed she has made herself a non-entity and irrelevant. Cathie Black is not allowed to make policy decisions and rarely grants interviews, only carefully planned photo ops. Even the New York Post's usually Tweed-friendly Michael Goodwin has questioned her ability to lead the New York City Schools.

Most disturbingly to her few defenders, is that Cathie Black has even lower approval ratings with mothers who send their children to the New York City Public Schools, an astonishingly low 13%!. I am sure it does not help that Mayor Bloomberg's approval rating is only 28% with parents who have children in the schools. However, in Cathie Black's tenure she has not made one positive change that would bring confidence and support in her continuing as Chancellor. In fact she is now saddled with various negatives, some of her own making, that has resulted in increased calls for her removal as Chancellor. Let's look at these negatives.

To make matters worse, the Independent Budget Office (IBO) shows that the 2011-2012 school budget shows significant reductions in school funds (3%) while increasing the Administrative Bureaucracy by 10%, Charter school spending by an astounding 689 million dollars, or a 12.4% increase and an additional increase in both consultant and computer services. See the UFT take on the DOE budget priorities here.

Instead of reducing Administrative costs as the Governor wants, Tweed under Cathie Black is proposing an ever-increasing bureaucracy and associated service providers at the expense of the public school students in the schools. Of course, this is not Cathie Black's doing but Mayor Bloomberg's campaign to get rid of senior teachers no matter how it hurts the children.

Unpopular with the public, unqualified to be Chancellor, Bloomberg's puppet, and downright bad for the classroom, that is how I characterized Cathie Black.
Posted by Chaz at 10:50 AM

You think we can see a resignation by the last day of school?
17% in March, a few more months left...we can only hope it goes downward. How much more of a low approval rating does she need for the DOE to get it?

I am an optimist but also a realist. Approval ratings bad and very optimistic for New Yorkers, but I also know too well how the DOE operates.

Shouldn't we actually blame Steiner for giving Black a waiver to be the chancellor? Doesn't it reflect on him that he allowed the most incompetent, unqualified person to run the NYC school system? Shouldn't Steiner feel some shame for this and shouldn't he get the blame?

I don't want her to resign. She is the perfect emblem for Bloomberg's reforms - clueless, got the job through cronyism, spouts nonsense and ed deform gibberish, people hate her, and she is respected by no one - not even Bloomberg's ed deform pals.

I'm with RBE. Cathie's just too good at truly being clueless; anyone else would be boring at this point. My wish is an old folks' buyout (give people @ 22 years' longevity 3 years and we'll leave it all to Bloombie and the newbies!) And hey Cathie, you too could get a buyout. Then apply for your NYC pension just like Uncle Joel