Why Does The Media Ignore The Fact That Bloomberg Does Not Demand Significant Headcount Reductions At Tweed? 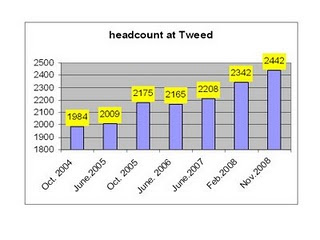 It is well known by now that Mayor Bloomberg has threatened to layoff over 4,600 teachers. This is addition oi the 4,400 teachers who were or will not be replaced when they left or are leaving the schools in the last three years. However, the Mayor has remained strangely silent about the lack of a reduction in the headcount or consultant services at Tweed? Why? Furthermore, the media has ignored this and I can't help to wonder why? Are the news media complacent with the Bloomberg/Blachk Administration to demonize senior teachers while ignoring the real issues at the DOE?

How can the media claim they want what's best for the children but think that laying off over 4,600 teachers from the classroom which will result in ever larger class sizes is something acceptable while not questioning the bloated headcount at Tweed? Do we really need eight Deputy Chancellors? Direct services to the classroom is what's important and that means lower class sizes and experienced teachers. However, the media, especially the New York Daily News and New York Post are so focused on eliminating LIFO they cannot or will not see the big picture that reducing the bloated headcount and consultant services at the Central Bureaucracy and saving teachers is what is best for the children. In testimony about the FY2011 DOE budget the UFT President, Michael Mulgrew, showed that since 2007 the DOE lost only 21 positions in the Central Bureaucracy. In fact, Mr. Mulgrew stated the following:

Further, the department’s own figures show some central office staffing jumped as much as 30 percent under this administration, with non-pedagogical departments such as assessment and accountability, human resources, public affairs, and information technology growing dramatically. The DOE legal department has nearly doubled in size in the last nine years, and financial operations expanded from 174 to 267 during the same period.

The media really should do an investigative analysis on the DOE's lack of transparency and how money is actually allocated in the Central Bureaucracy instead of droning pathetically on LIFO. At least the New York Daily News wrote an article on how Tweed is increasing its budget by 24 million dollars for more computer contractors while laying off 4,600 teachers. Even they seem to smell a rat here. Previously, the New York Post had reported that there was an increase of 16,360 employees at the DOE since Bloomberg became Mayor and questioned the projected budget. By, contrast the teacher population remained relatively, stable, during the same period, initially increasing by 4,000 but with attrition the last two years the net increase is less than 1,000 teachers, not including the additional 1,500 to 2,000 teachers leaving the system at the end of this school year.

Let's see if the New York media starts asking the right questions on why is the Bloomberg/Black Administration is not asking for serious headcount and consultant reductions at Tweed while demanding the layoff of 4,600 teachers winch has a direct impact on the classroom?

If the news media really cares about the children as they claim then they need to follow where the money goes in the DOE.
Posted by Chaz at 10:09 PM

A major 'detail' is the shift of administrative personnel off of central's books and onto the schools'.

The computer tech - was a central employee, now serves a CFN, and paid for by the schools.

Same thing drove the order to bill schools for staying open late (I think they rescinded this one) earlier this school year.

More shell games to hide how bloated Tweed has become.

I'm beginning to believe that Bloombucks is the Madoff of Mayors There's waaay too much money unaccounted for (City-time, School constructuon authority,etc.) and I think Bloombie will head off to Bermuda at term's end having bankrupted NYC.

Boss Bloomberg rewards all of his cronies and their kids, and rewards anyone who carries his water, by doling out pricey jobs out of ALL places...The TWEED BUILDING...? You can't make that up.Now children, let's now discuss how the "Tweed Building" became synonymous with political corruption....But Heir Bloomberg, leader of the Facist Corporate Party, owns The Press in this town, can get away with corruption that Boss Tweed couldn't. Where was the last, non-blog, anti-Bloomberg political cartoon you've seen in the major media publications?

The privitization , charter school, corporatization beast is fed through Tweed. This beast must be fed more and more, since the corporate/corrupt model is base on growth...for the few.

Instead of "Night of the Living Dead" we are experiencing a flick of another plot-the yuppy takeover of public education...where ALL of the invaders speak with the identical Midwestern inflections, and use the same buzz words.
This budget supports all of the yuppies, sons and daughters of yuppies (herein defined as attendance in elite colleges and lily white) who, because we are in a Depression, have decided to make education their profession-at least for now. Nothing like a good government paycheck with benefits , to slum with, during the next decade of flat or nonexistant jobs and opportunitiy...Unless you score on Wall Street, the job front SUCKS...We are in a DEPRESSION....REALL unemployment is 20% or higher.Wait till you see the effects of higher energy prices over the next few years...Stock up on food staples NOW...store em in your basement...Oh...and try to score one of those gooood government jobs..."you're going to make a killing in that"...