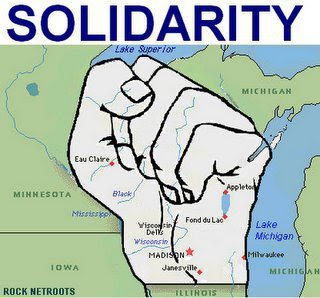 There has been much criticism about unions over the last year. Wisconsin, Ohio, Indiana, New Jersey, and even New York City unions have seen attacks on their very existance. The Republicans have jumped on the anti-union bandwagon and even in union-friendly States like New York have tried to pass legislation that would limit or destroy the union's right to collectively bargain.

The question is why now? The short answer it is a recession out there with a nationwide unemployment rate of 9% and an additional 16% underemployment rate. That means a quarter of the working nation is not able to maintain their expected standard of living. These people need to blame somebody and they listen to the mass media and the politicians on who to blame. Do the news media blame the Wall Street bankers who gave out mortgages to credit unworthily people causing a major housing crises that started the recession? Or the hedge fund managers who manipulate the markets that results in phony profits, when it really was a deficit? How about the corporate speculators that buy and sell companies based upon their whims that result in many layoffs? No, the news media and their Republican allies blame the unions. The unions are an easy scapegoat for the country's economic ills. Take away the outrageous bonuses for Wall Street? No way! How about eliminating tax credits for companies that move overseas? Bad for the country. How about making the rich pay their fair share of taxes? Do you want to hurt the American economy? However, these very outlets that defend Wall Street, Corporate tax loopholes, and low tax rates for the rich have found something they seem to all agree on. That is to reduce the benefits of Public Workers. To them it doesn't matter that when jobs were a plenty, many workers didn't want the sub par salaries (teachers) when they can make 25 to 75% moire as a professional in private business but with a recession, these jobs dried up and now these public worker jobs look good. The result is a jealously by the very people who snubbed these jobs in the first place and now demand that the public worker "due process" and fringe benefits be reduced.

Across the country the many news outlets want a rollback of public worker health and pension benefits. Wisconsin, Ohio, and Indiana are only the latest States to pass legislation to do just that. Even in a hotbed of unionism like New York health and pension benefits are under attack by the very politicians who approved these benefits instead of wage increases in the first place. According to the politicians "that was then and this is now". Worse is the attack on the union's right to "collective bargain" a contract. The elimination of "collective bargaining" is the main goal for many States as it will give the employer the upper hand in negotiating a contract by imposing whatever conditions it desired. For example if the teachers' union did not collectively bargain a contract, Mayor Bloomberg could simply end "last in, first out" (LIFO) by decree and fire teachers the DOE does not want or like.

Both internally and externally the unions must band together and not give one inch when it comes to public worker rights. This is not the time to snipe at each other while we are under attack. Divided can only result in giving up our precious Civil Service protections will start a "slippery slope" that will result in losing more of our "due process" rights. Once we lose those rights we will never get them back and make our unions toothless. Only the unions keep employer abuses in check and level the playing field. Our unions deserve 100% support in their stated goal to fight this Media and Governmental onslaught against worker rights.
Posted by Chaz at 7:21 AM

teachers are to blame because administrators up to the mayor refuse to stand-up to those parents who have children that are disruptive and not interested. so the mayor creates charter schools for those who have caring parents and lets everyone else bottom out. no need to pay a living wage to the teachers of those kids who aren't going anywhere academically. give them a script and turn them over every 2-3 years.it's racism and against the law. gov't is supposed to provide a decent education to all. excuse me, but teachers have enabled admin to blame us instead of advocating for children. no poor urban child left behind my ass!

The teachers have the largest union. It makes complete sense for the robber barrons of the 21st century to go after them.

Instead of Vichy collaboration for a seat at the childrens table, unions need to be run by the rank and file like they did in the 1930s in San Francisco and Minneapolis.

The three piece humps and their blackberrys are the same corporate pricks who have taken our union into a corrupt bloated patronage mill.

No different that mafia thugs. They have hijacked an organization that harvests money from its hosts, us.

What is needed is what took place in Chicago. Rank and file should sweep away the treacherous cretins that are in power.

Exactly, they are sucking our blood while we sit around and whine that the kids are out of control and there's too much testing and too much this and that....for the last 20 years all we do id dither about nothing! This is insanity. Were the hell is the Union? On vacation? Don't count on Coumo to come through either.

You all complain about the mayor but the union leaders are no better than the mayor. The union is acting like a big corporate organization and all they care about are their salaries.

Do you think they care about the teachers? NO! They care about keeping there large salaries because they do not want to go back to being teachers and earning half or less of what they earn now.

no crap! money makes the world go 'round