The UFT Needs To Stop Negotiating With The City & The DOE On Any "Teacher Evaluation System" Until Mayor Bloomberg Is Out Of Office. 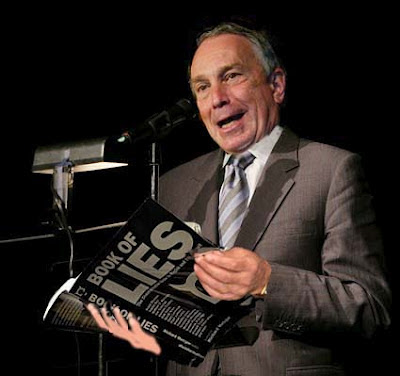 Amid the public fiasco of the publishing of the inaccurate and error-filled teacher TDRs and the admission by the New York State Education Department (SED) that present state law will allow teacher grades to be made public, the UFT needs to cease any negotiations dealing with the "teacher evaluation system" and anything else with the City until Mayor Bloomberg leaves office. When will the UFT understand that dealing with the devil only gets you burned? Already today Gotham News reported that the City has started to proceed with the "Turnaround" for 33 schools even if the State SED does not approve of the City's proposal. A potential increase of 1,750 ATRs and another waste of $100 million dollars.

This Mayor has led the attack against New York City teachers by scapegoating them time and again and blaming them for all the ills that affect the New York City Public School System. He takes no responsibility for the lack of academic achievement, increasing class sizes, reduced resources, and outrageous consultant and technology budgets that starve the schools and hurt the children. Instead of fixing what is wrong with the schools, the Bloomberg Administration plays politics with his closing schools proposal. and seems to enjoy in humiliating teachers. Why would our union want to negotiate anything with this Mayor who scapegoat teachers for his failed education reform polices? Let's look at what his failures has been.

I beg our union to cease all negotiations with the City and DOE until Mayor Bloomberg is out of office since any agreement will be bad for teachers and worse for the students they serve.

This advice is the best I have heard to date.
Bloomberg is a sleaze. Get in bed with him and you walk out with a disease. wait the little dictator out!!!

I think it is time that we begin the process of leaving the union. This isn't a "union" that is watching out for interests anymore. I think many of us know this has been going on for a long time....our union has failed us!!!

Chaz, I heard you call on SBS with Leo yesterday. One question I have and also asked on GS site is this. To me, it sounds that the chances of the city and Union coming to a full agreement on this new evaluation is not that good. They are basically miles apart on the issue of the other 20 percent. The city wanted it to again include exams while Leo stated it is a line in the sand that they will not cross - meaning the union wants some alternate assessment (portfolio, etc.) Am I incorrect in thinking that a deadline was set by the governor that if no new evaluation was hammered out by the city and union by a certain date next year that Cuomo would then impose his own evaluation system into place. Im a bit uncertain about this. Do you know the details about any deadline and the consequences of the deadline not being met. Appreciate it.

My understanding is that the State would withhold the 4% increase in funds and not try to impose their own. Of course that could change.

The problem with the UFT public posture to its membership, through their mouth pieces such as Leo et al, is that they are attempting to play up the fact that the UFT is 'miles apart' in terms of the 20% being whatever is best for the membership. It has less than 1 year to come to agreement or facing a loss of the 4%...While we have no educated guess of the strategy the UFT/Unity is attempt to play, if the recent past is certain, it does not bode too well in terms of fairness and logic.

Wasn't it the UFT that decided to turn the successful result of the 19 closing school lawsuit from back in 2009, into a pyrrhic victory by allowing the DoE to co locate their new small schools into the potentially phase out schools
Wasn't the old regime of the UFT that decided to allow the end of seniority transfers and the creation of the ATR fiasco with the 2005 contract?
Didn't the UFT decide to go luke warm on endorsing Thompson for mayor back in 2010, which in fact allow the Dear Leader to buy more destruction through his 3rd term?
What about that nonsense at Brooklyn Tech in February sowing confusion among the protesters of the PEP rubber stamping panel?
The UFT was played into verbally agreeing to the NYS Teacher evaluation in the hopes of getting the moneys flowing again to the 33 transformational schools that now, the Supreme Leader has decided to chop and once again, pack the rows of the ATR, in an astute move to bad mouth it again, demonizing all teachers that join its ranks...with sights in perhaps attempting to place time limits through the back door.

I speculate that the UFT will kick and shout against the DoE but that in the end, with allowing itself to be backed to a corner, it will throw the tower, get something worked out, which will MOST LIKELY at the expense of the membership and send the same failed propagandists again to write "krappy" articles attempting to tell the chickens in the coop that the new guardian, the wolf, can and should be trusted to guard them against injustices and violence.

If people have a different idea of what will happen, let me know.

perhaps the UFT will push this until its final moment, fail to make any compromise, NYC will lose the 4% and the Supreme Leader and his destroyers will throw 3-4 dozen schools under the PEP closure process....all in order to bid time and see who comes on top in November 2013.

I tend to bet for the first scenario.