I Predict That The ATR Crises Will Really Explode In The 2012-13 School Year . 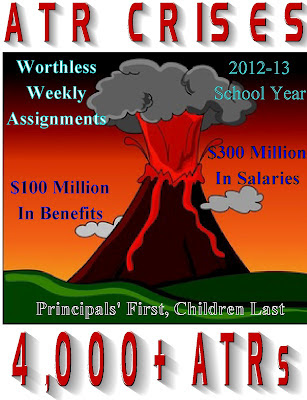 One of my friends told me that his Principal had informed the Assistant Principals in his "Turnaround School" that the Network Leader had notified him that Tweed is encouraging the Principals of "Turnaround Schools" to hire the maximum amount of "new blood" (newbie teachers) for their school for the 2012-13 school year. That means that 40% of the new staff will have no real classroom experience and already struggling schools will struggle even more as their academically low achieving students will be the "guinea pigs" for teachers who themselves must learn curriculum and acquire classroom management skills. The result will be an explosion of the ATR crises in the NYC school system. I anticipate 4,000+ ATRs will be floating around the NYC public schools on a weekly basis in the 2012-13 school year, thanks to Mayor Bloomberg and his pet poodle, Chancellor Dennis Walcott, this will be the largest amount of ATRs ever since the 2005 contract which allowed for their creation. How did I obtain the 4,000+ figure?

First, there are approximately 900 ATRs currently going week to week to schools in their district. Second, There are about 400 teachers that have provisional appointments for the present school year and may be put back into the ATR pool at year's end. Third, there will be 1,750 teachers who will no longer have a classroom assignment in the 33 "Turnaround Schools". Fourth, there will be 26 schools closing and with other large schools already going through the closing process (Jamaica, Beach Channel etc). This could result in 1,000 more teachers who will become ATRs. Finally, everybody believes that the Bloomberg Administration and the DOE will lift the hiring freeze by the summer as the City's economy slowly recovers. This will severely limit classroom positions for highly-paid experienced teachers as Principals watch their tight budgets. In fact some of the more unscrupulous "Leadership Academy Principals" will continue to find ways to eliminate senior teacher positions in some subjects and hire "newbie teachers" for other subjects who will end up teaching the same type of courses as the excessed senior teachers were.

The ATR crises, solely manufactured by Mayor Bloomberg and Ex-Chancellor Joel Klein, with the union's acceptance back in 2005 is likely to cost the DOE some $400 million dollars in salary and benefits. This will allow the DOE to shift the blame to the union by claiming the union continues to protect "bad teachers" when the truth is that Principals don't want senior and high paid teachers on their tight school budget. However, the DOE will tell the mass media that already large and rising class sizes, lack of resources, and tight budgets would magically disappear if they could only get rid of the ATRs. The DOE has convinced the NYC newspapers that the ATRs are the "Jews" of the education system, it is all their fault for the problems that plague the NYC schools.

I truly hope I am wrong about the 4,000+ ATRs but unless the union takes a more "pro-active" position and stops the Bloomberg Administration in its tracks, This scenario is very much a reality.
Posted by Chaz at 10:12 AM

I wish you would stop painting all principals with such a broad brush. I am a principal who is very happy with his mix of experienced and new teachers. I have no plans to excess, U-rate, or otherwise chase out anyone due to their salary level. In fact, I am making every budgetary effort to do the opposite. If I need additional staff next year, I will look to the Open Market which is all experienced teachers- ATR or not. There are some Tweed-oids among principals who may be following what is dictated, but quietly, many of us are doing what's right rather than what we are pushed to do.

The 4000 is a good bet to begin. Some will get hired and others will retire or move on. In the end, we could see 3000 active ATR's in September. Yes, Unity and Bloomberg created this mess and their solution will not be good for teachers. It will be interesting to see how this unfolds.

Most principals will abide by any dictates from above and the fact you acknowledge there are dictates, is really scary.

I add to the blame by placing Randi Weingarten at the head of the list. Back before the allowance of the third term orchestrated by Bloomberg and Quinn, the UFT had a rock solid block in the legislature to have a check on Bloomberg on the PEP. The composition on the panel would have been 13 with the mayor having 5 in his pocket and the other 13 free to vote as they see fit. Like magic, Weingarten reversed the position and most thought she had reached an agreement with Bloomberg over the contract. No contract, no check on the PEP, and welcome to the conditions that now exist and very possibly the scenario you predict for the ATR crisis that continues to cost the city schools.

Correct 8 would have been free to vote as they see fit not 13 which is the total number of members on the PEP.

An exploding number of ATRs is an intended consequence of the school-closing strategy: it is there to place what Bloomberg hopes will be irresistible political pressure on the union ("Look what we're spending on these teachers no one wants!") to cut the ATRs loose and agree to the Chicago model: get a job in 18 months or be fired.

Chaz,
I appreciate your efforts in analyzing the data and the moves of the BOE(they are still BOE. Look at all of the legal documents), and I look forward to reading it everyday.

I am concerned with the cintinuous finger pointing to Leadership Academy Principals only, as administrators following dictates. I have a principal who has been a principal for over 12 years and she's near retirement. At staff meetings she has mentioned avoiding hiring experienced teachers (read older than 45). This year, every vacancy has been filled by someone <28 years old. I'm sure there are many more like her who are non-leadership academy principals.

Please apply the title of chamcellor's flunkies across the old and the new.

I agree with you this could be a crisis, and also with Michael Fiorillo, that said crisis is absolutely intentional. I'd just like to add that there is another issue kind of up in the air here--that 40% figure about "new blood."

The Obama model suggests a maximum of 50% staff retained, while UFT contract suggests a minimum of 50%. If Bloomberg carries out his idiotic plan, this contradiction will have to be resolved, and likely before 18D selection committees can place new faculty.

Perhaps a ruling against the Mayor will dissuade him somewhat. Perhaps not. He's certainly rattled his sabre before over teacher firings, and certainly wishes to fire as many as he can. He's even said so. How will his massive ego deal with this situation? Will it be different if his mayoral control/ absolute power is successfully challenged?

Only time will tell, I suppose.

I would be careful of using the term "idiotic" when in fact it is a brilliant decades old plan with the assistance of the UFT leadership without which Bloomberg would have had an enormously tough time. Imagine if the UFT had used whatever muscle it had -- ie, COPE money -- to argue against unfettered power to the mayor or the policies of closing schools or the destruction of large high schools and the promotion of small schools as a blanket policy.
So to place the blame on Bloomberg alone is misleading. The UFT should be an indicted co-conspirator.
The old lead in Chicago pretty much did the same as Unity but was not competent in holding onto power. But they left a wake of destruction and a weakened union that the new leadership which came directly out of the classroom is trying to repair starting almost from ground zero with a mayor as bad or worse than Bloomberg.
And yes, just watch the NY Post go to work on the ATR crisis, following certain vulnerable teachers and even going to their homes in surprise visits.
If any teacher receives such a visit I urge them to expose the name of the reporter and find out their address so teachers can visit them to ask about the quality of their reporting.

The 2005 contract had its faults, but it did convincingly pass. Also, we did get the no layoff clause in it. People seem to forget that

Let's see, for the worthless "no layoff clause" that would only have affected the newest teachers, we were forced to give back seniority transfer, the right for excessed teachers to get a position in the district, causing the ATR crises, the use of "probable cause" to suspend teachers without pay for three months, adding more time and we didn't even get full retroactive pay.

great deal I must say.

Anonymous 1:59 is either lying, or deluding him or her self.
Every principal in the system is following Bloomberg/Walcott's orders, or they would lose their jobs, as 33 of them will be doing in June.
The only people who are going to be attracted to the teaching profession after Bloomberg is finished, will be unemployables with IQs below 100.

Is there any data which deals with performance of Leadership Academy principals? It seems that they are a bunch of incompetent people who have been put into positions for which they are uniquely unqualified. Often, in the Unity Caucus house organ - the United Teacher - when there are articles about staff being at odds with a principal, the principal is an Academy grad.

i was listening to 1010 this morning on my way to work, and i heard a sound byte of a senator criticizing Walcott's scapegoating of teachers. I thought the name of the senator was Drumm, but I can not find any information about him anywhere. Did anyone hear the same thing I did? Does anyone know the name of this "senator" (they did use the title "senator").
By the way, Anonymous Principal, most of the principals out there are pretty horrible. You might be an exception to the rule--good for you!

Councilman Dromm in district 25. He's a teacher, too. Support him!!!!

Principals who are dumb or inexperienced enough to follow what Tweed tells them to do verbatim usually find two things out. First, that much of what Tweed dictates won't work for their particular school and can provoke chaos. Second, that if they do follow Tweed's dictates and the proverbial sh-t hits the fan with students or parents or teachers, Tweed does not back them up. Tweed is consistently using dumb or inexperienced principals in their efforts to rewrite collective bargaining agreements de facto and then blaming the principal when it hits the news media. Off the top of my bald head, I can think of 7 examples of this recently.
Bottom line: a good principal knows and values a good teacher when he/she sees one and Tweed be damned. They're all temporary presences in our lives polishing their resumes- from the top on down. After they're gone and sanity is restored, some principals will have been heroes to their schools and others will be Quislings. It should be interesting. Quisling, I believe, was eventually executed by hanging if I remember right.