Why The DOE's "Turnaround Policy" Is Doomed To Fail. 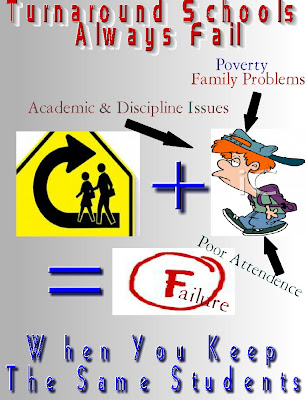 First, and most importantly, the "turnaround schools" will keep the same students that are the reason the schools are closing in the first place. The same students who come from high poverty communities, dysfunctional families, have poor attendance, and suffer from serious academic & discipline problems will be retained. Unlike the new small schools that are able to eliminate these "high needs students", the 33 "turnaround schools" will not be able to do that. Furthermore, the same high percentage of "special education and English Language Learners" will still be part of the "turnaround school". Again, the new small schools are encouraged to limit the enrollment of these two groups. Remember, these large comprehensive high schools were the "dumping ground" for many struggling students who were excluded from the small schools that replaced their neighborhood high schools.

Second, while at least 50% of the experienced teaching staff will be removed from their "appointed positions", most of the "turnaround schools" can expect an influx of "newbie teachers" especially from alternate certification programs like "Teach for America" and the "Teaching Fellows" programs. Up to 40% of the staff will consists of instructors who don't know how to teach and have no idea of what classroom management is. I can just envision a 23 year old TFA from Yale University who, after a five week training course, is now facing the reality of how to lead students who don't want to learn and will not respect her. I pity the students who are the guinea pigs of the many "newbie teacher" who doesn't understand curriculum and has no classroom management skills. The result will be academic chaos.

Third, in conjunction with the faulty and flawed "teacher evaluation system" there will be little teacher collaboration, rather there will be teacher competition as all the teachers will "teach to the test" and refuse to take failing students from other teachers that can adversely affect their grade. For example, if a student is failing due to attendance, academic, and/or behavioral problems and the Administration wants to transfer the student from a struggling "newbie teacher" to an experienced teacher who may have more success with the student. The experienced teacher would have to be insane to accept the student, knowing it will affect his teacher grade. I know, I know, Mayor Bloomberg did say teacher experience does not count. However, the rest of the world knows better.

Finally, unless school discipline policies are changed, the "turnaround schools" are destined to fail. If the schools refuse to enforce stringent student discipline codes, then students will walk the halls, use their ipods & cellphones, and disrespect school staff without an consequences for their bad behaviors. Moreover, many of these schools fail to enforce student dress codes and allow inappropriate "thuggish" and "sexual" clothing. The always outspoken Sate Senator Eric Adams is usually sympathetic with the plight of the poor and minority communities. However, even he has seen enough and demands that schools take action on student discipline and enforcing reasonable dress codes.

When you simply rearrange the deck chairs on the Titanic, it still will not stop the ship from sinking and the same goes for the "turnaround schools".
Posted by Chaz at 9:21 AM

I read that same Gotham Schools piece and came away with the same impression -that they really are serious about this Turnaround nonsense.- and OMG what a disaster it would be for all involved.
Thanks for putting it into words.

Turnaround means basically
F---ing around! F------ around with a generation of students, teachers, administrators and basically the whole city who pay for it all.

Is it written in stone that the standardized tests will begin next school year? I read somewhere that it might not start until the following year? Does anyone know for sure?

Nobody knows when it will start but I suspect for the English and Math teachers in grades 4-8 it might start next school year with the rest the year after.

Chaz
You have the wrong title. Should be "Why the DOE's "Turnaround Policy is Doomed to Succeed" given that it has zero to do with education but is aimed at getting rid of the teachers. In fact it is not the DOE's turnaround policy but Obama's.

unfortunately it is Obama's fault and a continuation of the DOE's wrecking ball of destruction. 1000 more atr's roaming around while we get 1000 new teachers - are you freaking kidding me????

Another 1,000 ATRs? How about another 3,000+ ATRs? 1,750 from the 33 turnaround schools. Another 500 hundred from already closing schools like Jamaica High School and a couple of hundred teachers from recently approved closing schools. I am not even including those teachers who were hired provisionally and teachers who will be excessed from their schools due to budgetary reasons.

I only have one word for all this chaos, STRIKE.

This is far from a fail for the UNITY thugs, Scumberg,Pearson,Obama, Junior In Albany, Murdoch, Klein, and the rest of the robots in the grey flannel suits. There was a LOT of corporate back slapping in those Pearson offices after this new assessment deal.

This is a COMPLETE SUCCESS...and they WILL close these schools because the dike has burst, the victory won, and now for all the small skirmishes...including the ATRs...game...set...match...KA-CHING..!!! This is now "garbage time" as they say in basketball terminology...Sorry to state this,,,,REALLY sad to post this...but I see no way out...

STRIKE....I believe it is the right time. This is a sickening time in our professions!!!

I teach methods in a graduate school(I retired from NYC after 35 years) and one of my students was elated to get a job teaching math (in February) in a Queens middle school. I thought to myself that maybe she shouldn't be so happy (a vacancy in mid February says a lot about the school.) In meeting with her and some other students last night she said that she was overwhelmed with paperwork and she was suprised that a good number of the students couldn't read. She asked me a very good question - how will the kids pass the 8th grade math exam if they can't read? I responded that they also would tank on the ELA test and guess who would be blamed!
I told her to try to stay under the radar and do the paperwork. It is obvious that the AP is more interested in bulletin boards than in students' being successful.

I hear this over and over again from our students. Principals are using day to day subs to fill vacancies (rather than ATRs) - they are cheaper than an appointed teacher and easy to fire.
It is very clear to me that the UFT has dropped the ball, especially when it comes to the ATRs. If Mayor Dumberg gets his way there will be about a thousand more ATRs and a bunch of new schools with incompetent Leadership Academy graduates who have little or no teaching experience acting (and I mean acting) as principal.

I keep expecting to see Rod Serling appear and tell us "Welcome to the Twilight Zone"!)

Love that my AP told the department that she is coming around for formal/informal observations and that the focus will be classroom decorating. What a great "focus" for the high school setting.

I recently heard from a friend still toiling away in a school designated as a turnaround school. This teacher, with 22 years of service in the school, was subjected to an unannounced visit by five APs and a "Talent Coach" (whatever that is.) They walked around, asked kids if they understood the lesson, took the teacher's lesson plan so he couldn't use it and left after 15 minutes. The next day my friend received the first "U" of his career.
I'm sure that this kind of harassment is going on citywide in the 33schools the mayor wants closed.