The Thought Police At The DOE Have Banned The Topic Of Dinosaurs For their New Tests For Elementary & Middle School Students And I Agree! 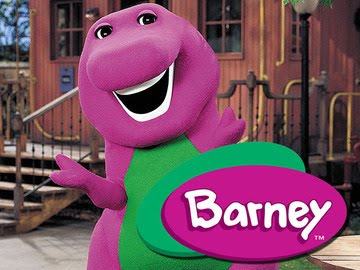 My first reaction to the DOE banning 50 taboo subjects for their new tests was here we go again those wackos from Tweed using their warped idea of social policy to impose ridiculous limitations on the school system's students. What idiot at Tweed actually believes that the topic of dinosaurs are dangerous to the NYC students? Maybe somebody should tell those non-educators that dinosaurs are extinct. Yes, according to the Earth Science Reference Tables dinosaurs became extinct 65.5 millions year ago! Then again, we are talking about Tweed which wastes millions of dollars on high priced consultants, complex and unworkable computer programs, and corrupt managers.

What did Barney the Purple Dinosaur do? Glad you asked. Here is what he did according to the 3020-a proceedings. Below is his 3020-a hearing.

Barney, the Purple Dinosaur's 3020-a hearing: Mr. Dinosaur, the SCI report states that you have a habit of hugging students and propositioning them by singing love songs about you and them in the classroom. How do you respond to these accusations? Mr. Dinosaur: I do hug students because they like the affection and it shows that people care about them. So you admit to improper hugging? I guess so but it is not improper. Mr. Dinosaur how about the love songs you sing to your students, like "I love you and you love me". Why are you sexually soliciting these students? It's just a song that shows I care, there is nothing sexual about it. So you admit to singing love songs to the students? Yes, I do sing songs to them.

I must agree that since Barney, the Purple Dinosaur is the only living dinosaur and he admitted to the following:

Therefore, I support Tweed's decision to make dinosaurs a taboo subject when it comes to our students in Elementary and Middle Schools. I guess in the DOE's case " a stopped clock is right twice a day".

You are brilliant! hahahaha