The NYS Regents Chancellor, Meryl Tisch, Knows The Truth About Mayor Bloomberg's Turnaround Schools Proposal As Being Political, Not Educational. 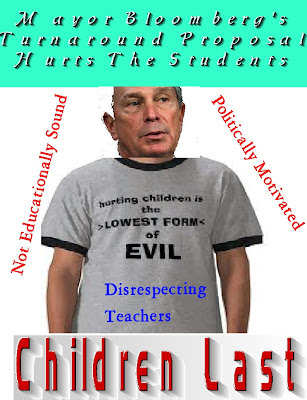 Gotham Schools reported that New York State Regents Chancellor, Meryl Tisch, criticized Mayor Bloomberg's "turnaround" maneuver for the 33 schools as being not about the students. She further went on to say the City's "turnaround program" was a political and not educational policy.

This is the first time that a high level education official came out and called the Mayor's wrong-headed proposal to close 33 schools using the "turnaround program" is politically motivated and not educationally sound. The question is will Meryl Tisch's complaints move the New York State Education Department Commissioner and the Governor to pressure the City to reject the Mayor's politically motivated proposal? I would not hold my breath that the State will reject the Mayor's "turnaround proposal" even when it really hurts the students that they claim to advocate for.

The Mayor now realizes that his educational legacy is in shreds with bogus graduation rates, phony "credit recovery programs" and a failure to narrow the income/racial academic achievement gap. Therefore, his new idea is to close all the large comprehensive schools he can before he leaves Office. Just like his education Reformer friends, it is not what is good for the students but to demonize public education, make teachers the scapegoat for society's ills, while giving a pass to the 1% who look at education as a business. Marc Epstein said it best in his Huffington Post article which best lays out the sorry state of public school teacher bashing, especially in New York City.

In the Mayor's world it is "children last" always.
Posted by Chaz at 5:29 PM

The removal of the principal at John Dewey High School is another example of the corporate model imposed on public education by the Bloomberg administration. The principal was informed that he was to leave and several suits and some women from the region were there to personally escort him out of the school building. Appears to be taken right from the movie Margin Call which depicts how corporations fire and then quickly remove employees. Bloomberg wishes he could do the same to all DOE employees he wants to terminate. Unbelievable!