The Real Reason Why The DOE Made "Evolution" A Taboo Topic For Elementary & Middle School Students. 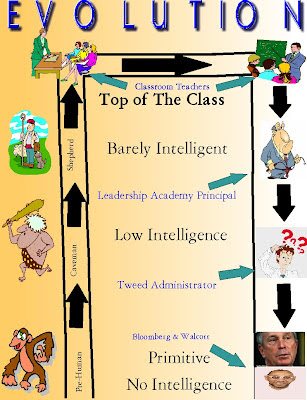 Those pseudo-educators at the DOE has yet again made a fool of themselves with the publishing of the 50 taboo topics that are not to be used in testing for the elementary and middle schools. One of the most controversial is the topic of evolution. The DOE has lowered themselves to the ignorance of the "hillbilly right" who fail to understand that evolution is science. The DOE claims that the topic of evolution on the City tests could "evoke unpleasant emotions in the children". However, the real reason the DOE does not want evolution to be taught is that our children will realize how humanity has regressed as you rise in rank at Tweed. In other words, the higher the administrative level you are in the DOE, the lower the intelligence IQ.

Is it any wonder that the DOE does not want our children to know about evolution? Tweed may falsely claim it is that they don't want to offend the so-called fundamentalists but the real reason is that they don't want the students to learn how the higher up you rise in the DOE, the lower their intelligence is. Just look at some of their moronic decision making under Mayor Bloomberg and Chancellor Walcott. Even lately, another high level DOE Administrator was fired after another case of his alleged misconduct was found Here.

I guess if I was a high level DOE Administrator at Tweed, I wouldn't want the students to know about evolution either.
Posted by Chaz at 8:31 AM

Religious literalists who don't want their children to learn about evolution are free to home school their kids or start their own schools.

Otherwise, as you rightly point out, for the DOE to give them presumptive veto power over curriculum shows its foolishness and lack of educational integrity.

Great visual of evolution of mankind into the devolution of the school system's leaders - Mayor and chancellor's continued cavemen mentality.

Thinking is not allowed by the future neofuedal serfs who will be the prisoners for the privatized industrial penal complex.

Compliant workers, who will work for lousy wages, in terrible conditions.

They will be worked impossibly hard in modern versions of the triangle shirtwaiste factory.

They will not think analytically,
they will be functional illiterates. They will accept authority without question.

They will be fired at will and have no security. They will be even MORE ignorant than they ARE AT PRESENT.

They will die in endless and stupid unwinnable wars for no other reason than,to enrich the corporations, as they have done in the past.

They will have no autonomy or freedom.

The little dictator is building a bridge to the 19th century, with a twist of fascist Germany and the compassionate regimes of Stalin, Pol Pot and of course, the great humanitarian, Mao.

He has bought the future. Long after the little shit departs, his evil and destructive privatization policies will continue and worsen.

He has bought everyone and so have his cronies. The type of middle management implanted in the system, coupled with his malanthropy will continue his policies for decades.

The union will collect dues from the temporary teachers and screw them as they screw us now.

There will be a severe shortage of state agents/teachers once the economy picks up.

Everyone will be learning online supervised by school aides.

Teachers will be a very rare commodity.

Serves you all right.

The taxpayers, teachers, unions, govt are all the cause of this.

We will reap the whirlwind. For doing nothing all this time.

These will be just desserts.

A spineless group of jellyfish, collaborators who aided and abetted this atrocity for over a decade.

So it really makes little difference about the new banned words, because we are only a stones throw away from burning books.

The vichy are collaborating and will continue to do so. This restriction on the first ammendment is reason enough to strike.

Strike for the coming regents. Let Bloomberg and his fellow data fetishists choke on no data, no accountability and no enhanced daycare youthful offender daily incarceration camps.

Let them roam the streets. A lot more stimulating than test prep.