Chancellor Walcott's Ultimatium To The Union. No Teacher Evaluation System, Look For The World To End. 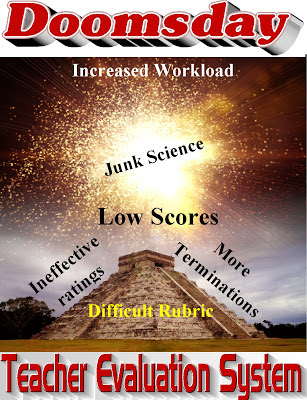 A major historic event is less than two days away.  No it's not the fiscal cliff.  Not even the Mayan Apocalypse.  It is Chancellor Dennis Walcott's ultimatum that if by Friday, December 21st, the union does not cave in an agree to a flawed teacher evaluation system, then he will cut school budgets and not replace teachers who leave the system.  Notice, he does not mention cutting the Central Bureaucracy at Tweed or the wasteful consultant services, or the elimination of failed administrators in the worthless "Children First Networks"?  Rather, the Chancellor tries to hurt the very children he is supposed to protect by cutting the funding of the already stared schools who already lack badly needed resources and threaten to increase already large class sizes.

Interestingly, the Chancellor failed to mention that the potential $250 million dollar cut is only 1% of the total education budget of $23.2 billion dollars.  It would seem incredible that the bloated bureaucracy at Tweed could not absorb a 1% drop in revenue which is not really a drop but a withholding of additional funds by the State for the next school year which may not even be legal.

It is to be seen if our union actually caves in and gives the DOE the very flawed teacher evaluation system, complete with junk science, a rigid rubric that has 57 components, and low scores for teachers who teach difficult children.  If the union does cave to the City and State, it just may be an apocalypse for the City's underpaid and disrespected teaching staff.

Note: Michael Mulgrew's letter to Chancellor Dennis Walcott means its doomsday for the DOE on the teacher evaluation system at their self-imposed deadline:  Let's hope there is none until Bloomberg and his poodle are gone.

The question is also: Will Bloomberg threaten mass teacher "lay offs" again? And if he does, will anybody actually believe him this time? (He will look even worse than the Boy Who Cried Wolf this time around!)