A Christmas Party Is Cancelled As The School Prepares To Close. 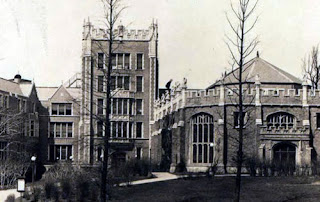 In my previous school last year.  I saw staff morale sag and was so low that even the usually oblivious student body was concerned about the teachers and their future.  The school is Flushing High School and it is on the list of closing schools as they received another "D" rating despite having a new Principal.

This Principal , instead of working with the staff, she actually made life more difficult for the staff.  First, she closed the back door of the school and makes the staff walk three blocks up and around to the front of the school.  Second she forbid teachers to send students to the attendance office, which is located in the basement and forces teachers to walk four and even five floors just to drop off their attendance folder at the end of the day. Finally, she has made little secret of her desire to get rid of many teachers she doesn't want in the school.  The result has been an increase of unsatisfactory observations to teachers or so the rumor mill says.  However, the worst part about this Principal is that she was the one who decided who to keep (untenured and lead teachers) and who to jettison out of her school.  The problem was when Mayor Bloomberg lost the "turnaround school" battle, the teachers she didn't want are now part of her school staff. The Principal now has a staff where morale is at "rock bottom" with many teachers knowing that the Principal doesn't want them in her school.  Yet this clueless Principal who is resented by many of the staff, decided to hold a Christmas party.  Guess what?  Nobody wanted to go!  Therefore, the Principal had to cancel the Christmas party due to lack of interest.

My question to the Principal is simple.  "Did you really believe that your staff would ever forgive you for your actions in the 18D process"?  If she believed "bygones be bygones" then she must be taking the same substance that the previous Principal had in his car when he was arrested.  No one will ever forget how your selection of teachers were politically motivated and not what was best for the students in the school.  Even the "teacher of the year" was jettisoned while an untenured teacher with a mediocre reputation who could not even function during the 18D interview process and was retained.

I do not respect principals who would rather hire untested newbie teachers over experienced veterans and allow their students to be guinea pigs as these untenured and newbie teachers struggle to see if they can teach effectively.  For these principals it is about their political wishes than what is best for the school's students and the Flushing High School Principal is more about one of those principals. Another example of the DOE's "children last " policy.
Posted by Chaz at 5:30 PM

What the heck is with these FrankenPrincipals? They are in almost every school. What on earth is happening to our profession. I get knots in my stomach when I wake up in the morning. They don't motivate anyone. It has become intolerable to work under these conditions. To put the icing on the cake, the people paid to represent us, go against us!.

Wow, sounds like how things were in my former school, Samuel Gompers in the South Bronx. It seemed as if the staff were being scrutinized and micro - managed to death. They also had a Holiday party but got upset that only a handful of staff wanted to go. I really could not imagine pretending to make merry with so many vile administrators. At the end term party they all sat at one table and watched with disdain the staff dancing,and I believe counting how often someone went to the buffet or bar. I am now an ATR now and although I would rather have a permanent school to work in, I am so glad that I am no longer in that depressing house of horrors anymore. Funny, that as I travel to different schools from week to week that I see so many of my former students. I am so happy that they got out and might actually have a chance to be educated somewhere else. The school is currenly in year one of a three year phase out downsized and sandwiched between a new Charter and a new Transfer school.

I was assigned there last month and it was a horrible experience. The school lacks discipline, with students yelling in the halls during class and teachers struggling to control students in their classrooms.

I actually felt sorry for the teachers who remain there as I went on my way to the next school.

It is worse than you think at Flushing. There is no morale and we lost many of our top students during the turnaround fiasco.

The Principal tried to bring a new tone to the school but has given up and the students fear little from the Administration. I hope I get as lucky as you apparently did and get a school that cares about their staff and has a student body that actually wants to succeed.

Chaz,This is the forever-ending story, I taught with you at Jamaica H.S. Under mayor Frankenburg every large high school is a target, Send every low achieving student to the school he wants closed, and it will close. Sooner, then later he will run out of schools. Then what? A total failure for school children in New York City. 60 minutes needs to take a look at this farse. Give them a call Chaz, you have the proof.

I used to go to this school in 2012, when Radovich was assigned as a principal. I was so confused because I expected the other principle who was arrested for having drugs in his car. The point here is Flushing Highschool could possibly be the worst highschool in history. The moment you stepped in the schools block you knew it was dangerous. The inside of the school was like the 80s crack epidemic. It was overcrowded too, there was graffiti in alot of places, things were broken including the lives of many students who attended this school. I got to see alot of violence during those years. There were atleast 2 or 3 fights a day,stabbings happened outside the school, some kids carried weapons of all kinds, everyday robberies happened. Prostitution was real aswell as teenagers aborting their unwanted babies. Drug dealers and gangs were everywhere and everyday the teacher would verbally fight with its own troublemaker students who cursed at the teacher, faught with other kids, and simply became a threat to everyone. Throughout those 4 years I decided to stay because I didnt care about school and was even planning on dropping out but rather ended up graduating. I witnessed alot of thug students come and go some of them had gang affiliations and they lost alot of friends to gang violence. Alot of people tend to say "Its the students, not the school." Well its actually the students, the teachers, and the parents and most of them didnt cared about education. Alot of these incidents outside school happened without adults at flushing highschool knowing the crazier lives their students lived. Everybody knew it was a bad school and only a handful graduated. It was a violent and loud school but I still managed to survive. There should be more coverage on Flushing Highschool like documentaries or videos about the school.