How Many Members Does Educators 4 Excellence Really Have? Not Many I Guess. 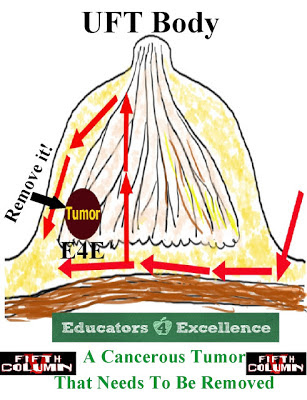 The UFT elections are fast approaching and the three caucuses, "Unity" MORE' and "New Action" will be busy going to the schools and handing out leaflets on why they are best suited to lead the union in the future.  However, absent from the election process is the education reform puppet organization, Educators 4 Excellence (E4E).  The question is why aren't they running a slate of people in the UFT elections if they claim they represent teachers?  The answer to that question is very simple, it is because they are afraid that their organization will be exposed for what it is,  a front for outside education reform groups and not teachers.  I would bet that E4E would receive well less than a thousand votes, probably a hundred or so, or significantly less than 1% of the eligible voters and they know it.

For E4E it's better to mislead the ever complaint news media with the fiction that they represent teachers and not their education reform masters.  Therefore, it's not in E4E's best interest to participate in a democratic union election where they will be exposed as a "special interest group" on the fringe of union politics and represent only a very thin minority of "newbie teachers", most being the two year Teach For America wonders, who will be long gone from the classroom in five years.

Whichever caucus wins the UFT election, one of their first order of business should be to expose E4E as a "fifth column",  a phony organization that does not represent teachers but outside education reform groups who want to destroy public education.  Too long the UFT has ignored this cancerous tumor in the UFT body and it is time to surgically remove it by refusing to appear with E4E in any forum.  These forums simply gives E4E credibility that they do not deserve.  E4E had their chance to show their popularity with teachers by running in the election and failed the test.  Let them fade into history as simply a tool for outside education reform groups.
Posted by Chaz at 9:47 AM

More like an annoying pimple than a cancerous tumor. The media and money make them appear like much more than they are.

I am not a chapter leader, but I plan to hand out tons of MORE literature at my school. My chapter leader is a Unity hack by proxy. (In fact, he is so clueless that he does not even know what Unity is). The sad thing is that is exactly how Unity wants things to be run. "Do as we say, and ask no questions".

Like Preparation-H, E4E (Excellent4Enimas)continue to spew diarrhea of the mouth.

As long as they're dues paying "customers", because they are not members to me, the UFT will never expose them.

E4E = Educators for Excrement that is why.

I agree chaz. We need to expose E4E for what they are. A tool for the ed deformers.

E4E is just a farce and needs to go away.

Before I retired New Action was referred to as "No Action!" Sad to say that if New Action and MORE are on the ballot then Unity will need fewer votes to get their people elected.

I find that the loudest E4E members tend to be the young and naive who do not understand what tenure really means. It is Bloomberg's attempt to simply pit veteran teacher against younger teacher, not for the betterment of education but simply to make it cheaper. And in the process cheapen the profession.

"Young and naive...pit veteran teacher against younger teacher". How true. The latest batch of newbie student-teachers arrived last week in my school and are busily working hard and discussing their "wonderful" experiences. True to form (and brain-washing), they are avoiding contact with veteran teachers like myself, lest we "poison" their minds.

A teacher at my school is coordinating an E4E meeting at a bar. E4E is offering teachers drinks and appetizers to just hear them out. However, even to RSVP for this event, you need to sign their declaratory statement on their website, saying you support their ideals. While some of them are good (better starting pay for teachers) some are ridiculous and anti-union.