The Two Versions Of The Failed Teacher Evaluation Talks.There's The Truth And There's The Mayor's Version. 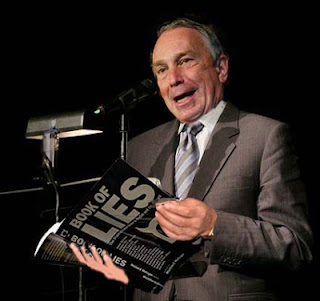 We all know that the State has taken away $240 million dollars of much needed school funding as the "teacher evaluation system" talks have failed.  The finger pointing for the failure comes from two sides the teachers union, supported by the principals union, State Commissioner John King, and the negotiators from the DOE who "shook hands" with the teachers union on a deal only to have Mayor Bloomberg blow it up. The other side is Mayor Bloomberg, his poodle, the Chancellor, Dennis Walcott, and the editorial boards of the New York Daily News, NY Post, and Fox 5 who relish blaming the  teachers and their union regardless on who was right.

It has become obvious that the union's version is the truth and that the Mayor's version is a lie.  Both UFT's Michael Mulgrew and Ernest Logan of the principals union said that they shook hands on a proposed agreement with top DOE officials  and NYSED Commissioner John King told the press that the DOE's draft proposal included a "two year sunset clause".  The very clause the Mayor claimed the DOE never agreed to and he would not accept.  In fact he called the over 90% of the State's approved teacher evaluation systems had an either one or two year "sunset clause" and the Mayor called them " a fraud".

Furthermore, when a State mediator was selected and the union apparently caved in to the termination of teachers found to be "ineffective" for the two year length of the teacher evaluation system, the Mayor instructed the DOE not to show up and mediation was cancelled. To make matters worse, the Mayor has just about insulted everybody who questioned his decision to shut down the "teacher evaluation system" talks, including gasp, the Governor himself. Finally, the Mayor has turned off just about everybody telling people that his purpose is to fire teachers and not make them better.  Not a recipe for success by having a union be cooperative when the expressed purpose by the one you are negotiating with is to fire their members.

Who is spinning the fairy tale?  Mayor Bloomberg'of course.

Here are two of Mayor Bloomberg's versions: He lies or he's lying.

Wait for Bloomberg's 3rd version: He will continue to lie.