It Appears That The UFT Will Endorse Bill Thompson And That Is Too Bad. 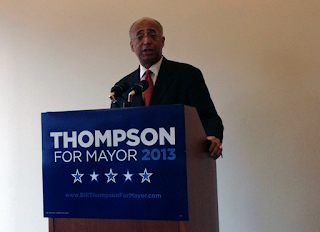 It is becoming increasingly clear that the UFT leaders will toss their collective hats and endorse Bill Thompson for Mayor.  This is the very same Bill Thompson who agreed with Mayor Michael Bloomberg in 2009 that teachers did not deserve raises, retroactive or otherwise.  Yes, the very same Bill Thompson who was President of the dysfunctional Board of Education and was City Controller who failed to investigate the many consultant thefts like CityTime. Now it seems that after yesterday's Delegate Assembly, the union will only support a candidate that can win.  In other words, it is either Christine Quinn or Bill Thompson from sources inside the UFT leadership.

Why do I think my union leadership will support Bill Thompson?  Let's look at the "tea leaves".

First,  Randi Weingarten has come out and supported Bill Thompson for Mayor and if you think Randi does not have any influence over her old union, then I have a bridge in Brooklyn to sell you.  Moreover, Bill Thompson has outlined his "education agenda" and UFT President Michael Mulgrew was favorably impressed by it.

Second,  it is highly unlikely the union will throw their support to Christine Quinn since she was partly responsible for Mayor Bloomberg's third term by allowing changes to the City Charter.  Furthermore, Christine Quinn quietly supported many of the Mayor's attacks on teachers and stayed silent on the Mayor's LIFO bill and the drastic cuts in school budgets.  Finally, she has been so closely aligned with Mayor Bloomberg that she is called "Bloomberg Lite" and I doubt her policy will be significantly different from the Mayor's.

Third, The other candidates are either unknown, too far to the left, or have political baggage and the union does not want to support a "loser".

While I do not have a favorite candidate, I would have like to see our union support either John Liu or Bill deBlasio but then I am only a member and my union does not listen to me.

Bill Thompson has always had a very good relationship with the UFT dating back to the Sandy Feldman days. He is one of the few politicians around with any institutional memory as to how the school system once was run. Yes, he has many friends within the reform movement, however he is more likely to be objective regarding many of the reforms and has stated his preference for a more democratic PEP. This endorsement if it comes is practical and Thompson regardless of the questionable polls has a strong base and has cultivated large segments of the Brooklyn, Bronx and Queens namely the African American and Latino communities. Sounds like a winner in this crowded field.

Oy! But nice of you to leave the talking points. Maybe Thompson could run for president of the Board of Ed. What exactly is a "More democratic" PEP which by its very nature is not democratic? Like the mayor gets to choose 7 or 6 instead of 8 which means he would be forced to coral one or 2 more. THAT makes it democratic? That by the way is what the UFT is proposing -- mayoral control with tweaks. We need to bring democracy down to the school level where teachers and parents can really have input.

It's unfortunate that the union is on a singular quest for a candidate that it thinks can win.
Really, it should be charting the course to influence who wins. There's too much in flux right now. The UFT could make a positive difference. So, it's dumbfounding that with all the differences, the UFT settles on Thompson rather than on De Blasio or Liu.

Well, unfortunately as a veteran teacher who has watched colleagues cast into the ATR Bin of demoralization, under utilization and stigma OUR union has long sold its soul to Bloomberg & Klein. It makes little difference what the rank and file have to say regarding whom the UFT should support for Mayor- we were sold out in Bloomberg's first term.