Why Our Union Cannot Support Christine Quinn For Mayor. 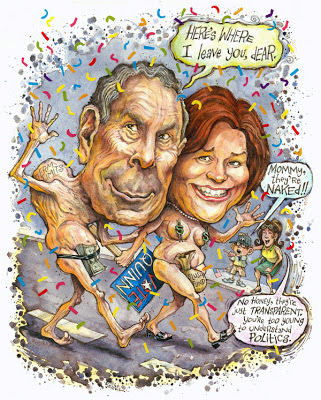 In a month the UFT will endorse a Democratic candidate for Mayor and Christine Quinn is making a major push for that endorsement.  However, under no circumstances should our union endorse Christine Quinn for Mayor since she aided and abetted Mayor Bloomberg's grab for power by approving a third term that has been a disaster for the NYC Public Schools. She was rightfully booed at the UFT sponsored conference for some of her comments and seemed to agree with the Mayor's education policy in co-locating charter schools, a non-educator for Chancellor, and wants to keep the phony letter grades for schools.  Let me remind everyone that as City Council President she rarely ever stood up to the Mayor, especially when it came to the Mayor's divisive education policy. In fact, she supported many of the Mayor's policy programs when in came to education.

Why shouldn't the union support Christine Quinn for Mayor?  Let me count the ways.

First, she allowed the Mayor to change the City Charter so that he and she can run for a third term.

Second, she failed to provide leadership in not standing up to the Mayor's distructive education policies that included closing schools, ignoring commu, nity concerns, and demonizing teachers, allow charter school co-locations, agree to ever increasing class sizes, and a 20% reduction in school operating budgets since 2008.

Third, she still insists on looking at non-educators as a Chancellor and cited Arnie Duncan an example which caused teachers to give her a loud chorus of boos and deservingly so..

Fourth, she wants to keep the phony letter grades that most educators know is a farce and keeps Principals like Iris Blge in power.

Finally, she has failed to show any real independence from the Mayor's education policy and given the power of  being the Mayor will be like having "Bloomberg Lite" in office.  Consequently, the union should not endorsed her candidacy for any reason whatsoever. Now if only our tone-deaf union leader would hear their member vocies on this issue but don't count on it.
Posted by Chaz at 5:03 PM

"Your union" supported King Michael, by not supporting the opposition. As long,as the union hierarchy reaps $40,000,000.00 DOE for family members ( see Mulgrew's sister) they will support whatever candidate keeps the gravy train going.

And that will be the candidate backed by the billionaire "reformers."

"Your union" supported King Michael, by not supporting the opposition. As long,as the union hierarchy reaps $40,000,000.00 DOE for family members ( see Mulgrew's sister) they will support whatever candidate keeps the gravy train going.

And that will be the candidate backed by the billionaire "reformers."

I agree whole heartedly and my own choice would be Bill Thompson. However, I believe that the decision to endorse will come from one person and one person only, Randi Weingarten and she is capable of going against the opinion and voice of the members so anything is possible.

However, endorsing Thompson this time means no raises as he stated this in 2009. Will Thompson change his position and give a small raise to the unions that may entail a few givebacks? As long as Tisch is somewhere in Thompson's shadow, that can be as bad as not giving teachers a raise. Tisch is relentless about the new teacher evaluation being tied to students' scores. She might be the reason for putting the kibosh on his run for mayor.

Yet, DeBlasio might be the mayor to give unions raises but make the school day and year longer. If I remembered clearly, he is in favor of extending the day. Getting a salary increased based on a longer day and year is not a raise.

Liu is picking up speed in his popularity and has endorsements in many communities. He won the endorsement of the people in Quinn's district.

I wonder if Bloomberg's stolen third term will be Quinn's achille's heel?

So what....if Quinn seems shakey, the reformers will shift their support to another candidate-and that will be the candidtae "our union" will support.

Again...Mulgrew's sister as COO of a DOE vendor just did 40 MILLION BUCKS in contracted work for the DOE, AND was given a sweeatheart position with the DOE...We're talking BIG money to be made here...and there are no saints in this town.

Bill Thompson was a complete pushover shill for King Michael. While he was supposedly running against The King, his wife was given a beautiful landmark building in Harlem (near The Park) to create her African Art museum. From whom...? The King. It's all a farce people...and you are only pawns in their game.

....oh, and "nice girls" who are "nobodies" don't just create startups and do that kind of business with the city on any level.

The Mulgrew family has pocketed some serious change over the last few years with this crony capitalist deal...and this is just what we learned about because they were "pigs"...they probably wanted to get her city benefits as well...so the gave her some plum, BS job title...