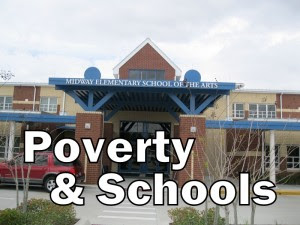 Be it ex Chancellor Joel Klein, Michelle Rhee, and Bill Gates, it is best to ignore the effects of poverty on student academic achievement and blame it on other problems, namely teachers.  While study after study shows that poverty is linked to poor student outcomes the Education Reformers will go to great lengths to ignore this linkage.  In fact the Education Reformers will tell anybody who bothers to listen to them that poverty is no excuse for poor academic achievement, as if they can wish away with a magic wand the educational problems associated with poverty. Instead, these Education Reformers have decided that blaming teachers and making them scapegoats to their failed educational programs rather than face the reality of what really is the root cause of a child's educational problems, poverty!.  How many times have we heard that "if only were can hire and fire teachers at will so that we only have great teachers teaching our students" as if a "great teachers" is a cure all for the world's ills.

While we are now starting to see a backlash against the education reform agenda, it will be quite a "high needs" students with appropriate wraparound services such as family counseling, adequate food, medical checkups, and after school programs not the phony programs that serves the political needs of the Education Reformers at the expense of the students, especially the children who live in poverty..
while before education reform is exposed as a farce it is and will fade into history as just another failed experiment.  However, until that time in the future we must stand fast against the Education Reformers and protect our