Mayor Bloomberg's Fuzzy Math When It Comes To Teachers.

Mayor Michael Bloomberg stated in his radio talk show that New York City teachers do not need retroactive raises since they averaged an annual 3.8% raise  in the last four years.  In fact, here is what the Mayor actually said.   “They’ve been getting raises all throughout this period,” Where did he get this "fuzzy math" from?  Abbott and Costello?

At first, I thought he was talking about step and longevity increases but those increases collectively averaged  about 1.5% yearly.  Where did he get the 3.8%?  Easy, the Mayor included the increased costs for health and pension as part of the 3.8% figure.  That's right, the Mayor is adding costs that do not show up in our paycheck as a justification for not approving retroactive raises to the teachers that he gave to almost all other unions. What a bunch of malarkey by the Mayor. I guess his hatred for New York City teachers is such that he will go to any lengths to justify not giving us a pay raise, even if he must use "fuzzy math".


I guess in the Mayor's fantasy world where he could have the unlimited authority to hire and fire teachers at will, ensure that the 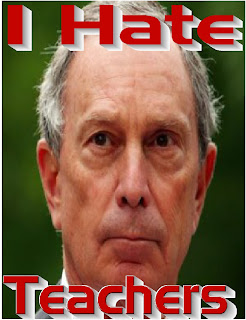 teaching profession is temporary with no pensions and retiree health benefits, and have class sizes of up to 70 students is out of reach as he ends his destructive education legacy.  Therefore, the next best thing is to direspect teachers to the very end by not replacing teachers despite the best City budget in years.

Mayor Bloomberg, from all 72,000 NYC teachers it's "goodbye and good riddance" and don't let the door hit you in the ass on the way out.
Posted by Chaz at 9:47 PM

What a phony Bloomie is. He will do anything he can to evade his accountability but blame it on others.

On January 1, 2014 he will no longer be the mayor of NYC. He'll be a regular, rich, citizen of the city. He will no longer need to have the police posted in front of his townhouse on 79th street and fifth avenue.

Why don't we have a rally in front of his place that will show the world the disdain and hatred we have for him?

Yes, the insanity will end soon and all will rejoice. Who could have every predicted that this loony mayor would could have done as much destruction as he has....I mean look at all the ATR teachers and counselors out there just eager to work and help students but left out in the bloomy system....wow...

So i guess bloomterd will become an ATR in January, 2014 eh? Yes, bloomterd the traveling atr mayor excessed from his position of mayor and now in the atr pool...The misery this man has instilled into our livelihoods is not measurable but what goes around comes around