Is This The Begining Of The End Of Charter School Expansion In New York City? 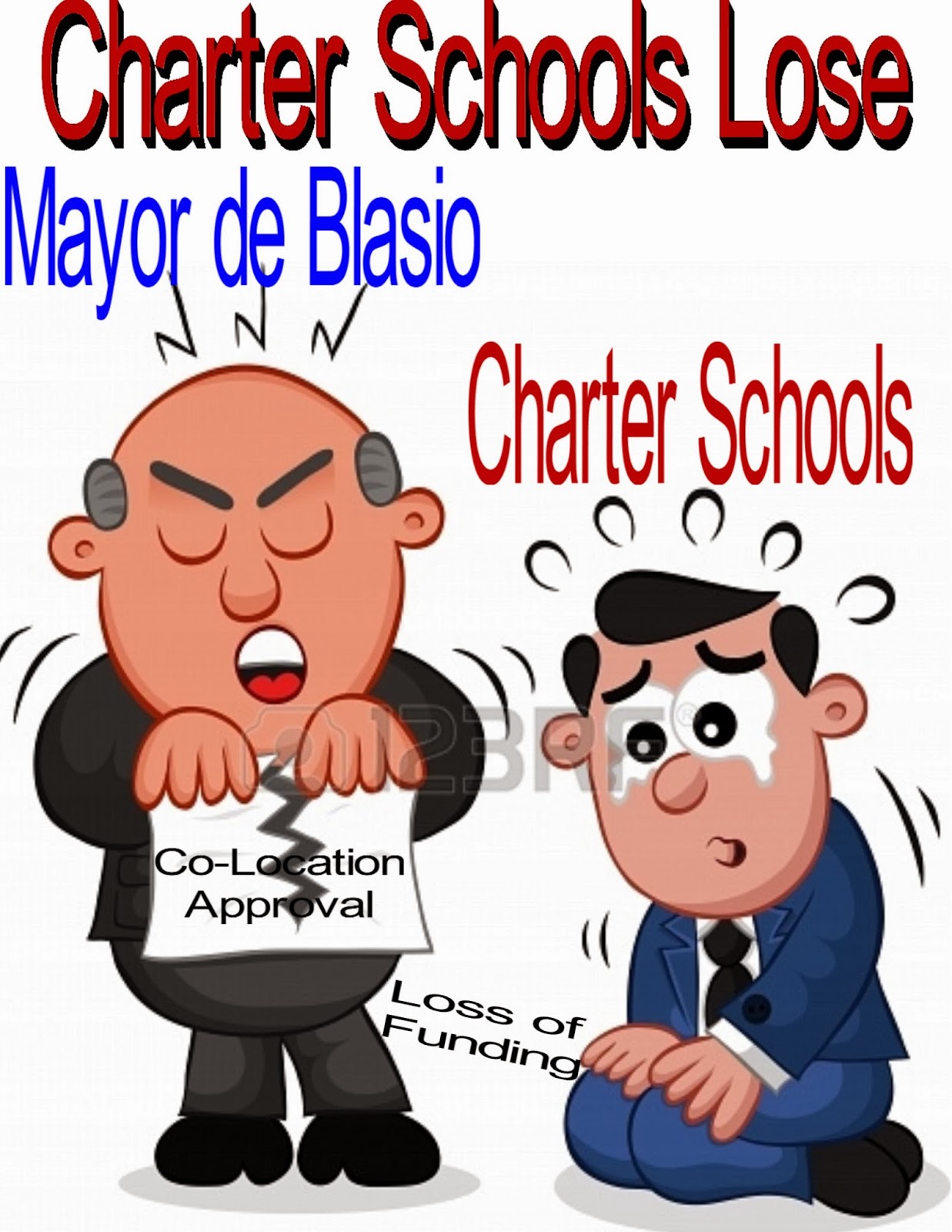 Now that Bill de Blasio has become Mayor of New York City the ever expanding charter school program looks like it will be stopped in its tracks.  The new Mayor campaigned as the anti-Bloomberg and wanted to stop charter school co-locations, expansions, and fund the public schools rather than increase funding to the charters.  After a slow start the Mayor has taken his first steps to deliver on his campaign promise.  The Mayor has authorized that $210 million dollars that was to go for charter school co-location costs be redirected into his emerging pre-Kindergarten program.

In response the pro-charter media, especially the New York Post has an article that interview parents who want the charter school programs fully funded and expanded.  The article was co written by the anti-teacher and anti-union reporter Carl Campanile.  I suspect the the editorial boards of the three newspapers will support the charter school movement during the next couple of weeks by pleading with the City not to halt the charter school expansion and employ the State to intercede on their behalf..

The next item on the Mayor's agenda will be the rent the City will demand of the charter schools for the 2014-15 school year.  I also believe the hasty approved co-locations for the proposed charter schools by the Bloomberg Administration will largely be reversed and these schools will probably never open.  The space will be given to the de Blasio per-Kindergarten program instead.

I predict that the inherit advantages that charter schools enjoyed under the Bloomberg administration will slowly disappear.  These advantages include the following:

strongest
and well financed charters will survive while paying rent to the City until they realize its better to get there own space.   It will be very interesting to see all these charter school supporters crying that its unfair to the children.  Of course, when it came to the 95% of public school children that suffered from inadequate resources because of the increasing amount of funding that went to the charter schools at the expense of the public schools, that didn't seem to matter to them.

Its about time that the worm has turned and now its the charter schools and their supporters that are crying the blues.  Let the tear ducts keep producing water in the charter school movement.
Posted by Chaz at 11:55 AM

Yes it's great to see the hammer coming down from DeBlaz. No new charters and no co locations. These public schools have suffered enough with giving up space and money. Chaz, what about these networks who support these charters? My principal told me in confidence that he was forced by Bob Hughes, president of New Visions to sign the petition to DeBlaz for schools to keep their networks if they wish. He doesn't want New Visions because they withhold a lot of money and have actually told my principal who he can hire and who he cannot, based on salaries. New Visions is a terrible group who are purposely not hiring senior teachers. They also are forcing all their principals within their network to back them. New Visions also works with fake consultant groups that were receiving millions from Bloomberg, gifting hundreds of millions to these groups that New Visions is affiliated with. It will all come out in the media soon enough. On Friday I asked every teacher in my school who our Network Leader from New Visions is and no one knew. They mentioned several names but they were all wrong. None if us know who our Network Leader from New Visions is and on top of that, we don't know what they do fir us except charge a ridiculous fee to our scared untenured principal.


I'm sure the networks are history next school year. However, there are other priorities that he will do during the second semester as we transition from the Bloomberg corporate model to an education model.

As Jackie Gleason use to say, how sweet it is baby......yes what goes around comes around....I remember pleading with the city to keep my former school open and not close it but bloomterd and his fake cronies only pretended to listen and then did what they wanted. So now the charter cries are going out but we can play the same game by listening (like the PEP did) but then doing what we want anyway...sorry charter people but really your answer is simple....get your own space...da..

Does anyone know the principal Ms. Laboy of Felisa Rincon HS on story ave in the bronx?? There are so many complaints against her on the website "do not apply" that date back several years now....Is this another principal that is getting away with this nonsense?? Someone please investigate.

It has only been a month. Give it time.. more changes (positive) will come. I do not think most will be disappointed. It will take a lot to undo the damage under the Bloom/Klein-Cott administration.

Disappointing!!!!!!!!!!!!!!!!
Chaz your comments on the ATR pool are Disappointing! How dare you tell us that bad schools need teachers too so we should all go there! What school do you teach in? Maybe you and your sister or loved ones should have the pleasure of going to one of these career ending schools! The ATR rotation system is good! It give us a chance to see the school, meet the Pricipal, his staff, and students, while also giving them a chance to see the teacher and what that teacher is all about. Them if they like each other them they can get hired. The right fit!
The only problem is that these schools are not given the moeny to buy us senior teachers! If they were giving the money to buy us them it would work great! A whole lot better than what you and the DOE want which is forced placement! There will be teachers that want to go to those bad schools, if they fit, and if not, well then something is wrong with the school and the Pricipal and this would give everybody a clear messeage to fix that school because nobody wants to go there!
The only other system better than this ATR rotation is the old seniority transfers!But we all know we will never get that! So if we are going to place the ATRs lets do it right, and not your way! You sound like Mayor Bloomberg tell us what is good for everybody! Who do you think you are! You don't speak for majority of the ATRS! How do you know what most of the ATRs want?
Where did you get this information from Chazberg!Most ATRs want to be placed but not your way! How about letting the ATRs vote! Let us have a say! You don't speak for us! Lets vote, to see what majority of the ATRs want! In fact I have an even better idea, let does ATRS who want to rotation from week to week until the find the right fit continue to do so, and you and all your friends that think like you can be placed in those so called bad schools! After all you don't mind teaching in once of those career ending schools do you chaz! After all,that's what we teachers are suppose to do! Teach any where, anytime under any boss and any kind of work conditions! Lead the way Chaz, Put your money where your mouth is!!!!!!!!!!!

Of Course they have to be approved by you chaz you don't want to put up anything that makes you look bad! Just like Bloomberg! He be proud of you!

Its not what I want, its what it should be and was before the 2005 contract, except for seniority transfers.

If you don't want to be in the classroom then look for another job!

A good teacher will make a lemon into lemonade while a bad teacher will do anything to stay out of the classroom. Which one are you?

Dear Chaz, I resent your last comment even thought it was not directed at me. By all accounts I am a good teacher-my principal even pleaded to a higher up to find me a position.What I observe --even in good schools is window dressing disgused as teaching. Creating artifacts,bullitein boards binders for quality review the list goes on and on.none of these things truly impact student learning in any meaningful way


I agree with you but if you are a "quality teacher" then you must be put back into the classroom and help the students. That may mean being put into a "hellhole" for a year to show what you can do rather than continuing the wasteful and ridiculous weekly ATR rotation.

Which one are you Chaz? Are you in one of those career ending schools, where the Principals are crazy and lie on when they observe you? Or better yet 3020a you for any reason under the sun!
I have seen great teachers, who never had a problem for over 30 years and then all of a sudden they were rated U in one of these career ending schools that they were forced into! What school do you teach in chaz? I want to watch a master teacher like your self teach in one of these career ending schools where the parents take no responsibility for their children's actions! In some schools they spit and assault teachers! Instead if that school has a hard time staffing or getting teachers then maybe we can bring the need attention to that school, by pressuring the DOE to get ride of that crazy Principal and shaming so of these parents to take responsibility for the education and a actions of their children. How would you like to teach at that school P.S. 106 where that no show Principal is at! Where the teaches are afraid to talk because the Principal will black ball them or 3020 a them for something she makes up, with the DOE's blessing and help! What did the Doe do to that Principal chaz? I want you to apply to that school chaz and see how well you do!