Why Is Michelle Lloyd-Bey Still The District 27 Superintendent? 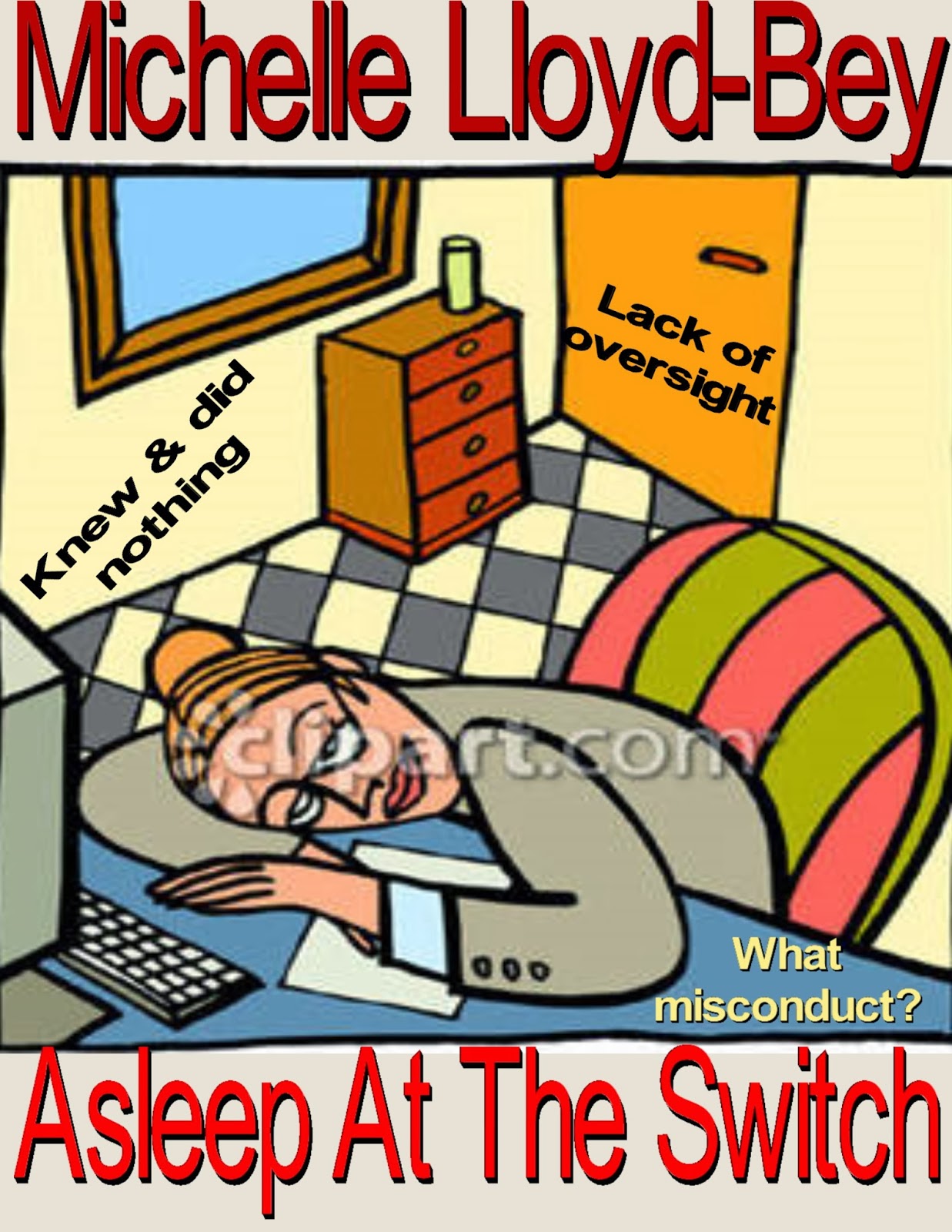 The continuing fallout of the reassignment and eventual removal of "Leadership Academy Principal" Marcella Sills has now spotlighted the actions of District 27 Superintendent Michelle Lloyd-Bey who apparently allowed the abuse at PS 106 to go on for years.  Interestingly, the Superintendent was once Principal of the very same PS 106 and one would think that she would have a more focused interest on the school's operation.  However, it appears that Michelle Lloyd-Bey was "asleep at the switch" as the many complaints crossed her desk from PS 106.

In 2007 Michelle Lloyd-Bey was named District 27 Superintendent by Chancellor Joel Klein.  Later on, the first letter from a teacher came across her desk about the problems at PS 106 that year.  What followed was many other incidents and complaints that resulted in many articles written about the school in the local newspaper called "The Wave".  Norm Scott was kind enough to include them in his Norm's Notes blog and can be found Here and Here. In addition, under Michelle Lloyd-Bey's watch many complaints came to her attention about the abuses at PS 106 and apparently she did nothing about it. According to the New York Post as many as ten letters that are in the newspaper's possession either was sent to Michelle Lloyd-Bey or passed to her from other DOE officials.

Finally, when the issue of Ms. Sills "time and attendance" was brought to the Superintendent's attention back in 2011.  Her only action was to remind Ms. Sills that she must adhere to the hours of her position and tell her who was in charge when Ms. Sills wasn't there.  No disciplinary hearing, no collecting of time cards, no oversight whatsoever.  In fact, this is what Superintendent Michelle Lloyd-Bey told the SCI investigators.

Lloyd-Bey recalled that, approximately two or three years ago, she had a
conversation with Sills concerning arriving late for work. Lloyd-Bey said that “people
started to talk about it” and, as a result, Lloyd-Bey contacted Sills and instructed her to
advise Lloyd-Bey when she was going to be late. Recently, after the New York Post
article, Lloyd-Bey had a disciplinary conference with Sills concerning her time and
attendance. Sills now was required to punch a timecard on a daily basis.

Why hasn't Michelle Lloyd-Bey been held accountable for the actions of Principal Sills.  To me its obvious the District 27 Superintendent ignored the problems at PS 106 and failed to take corrective
actions that could have improved the atmosphere at PS 106.   Michelle Lloyd-Bey was "asleep at the switch" and her failure to discipline the Principal and take corrective actions at PS 106 should result in her removal as the District 27 Superintendent.

Who supervises Lloyd-Bey? That person should be questioned and all complicit parties terminated. What's amazing to me is Bloomy touted the Business model over education, but he only followed the worst aspects of it. In this case he could have saved the future of many children by ensuring their education. Its his mismanagement that is evident in this case.

The way the DOE operates she will probably get promoted. A reassignment is a nice word they throw out there when in reality the DOE just makes lateral moves with administration. It takes a lot more to remove these people when you compare it to teachers that face charges. I hope your reportng on the topic is the start of exposing the issues with accountability at the DOE

Trust me- Sills isn't the only one that Lloyd-Bey is covering for. I can tell you this: the corruption in District 27 is so pervasive, if they ever started investigating, half of the principals and half of the APs would be "reassigned".

She deserves her hearing, just like everyone else does, but as we know administrators NEVER get fired.

Farina's principal's letter just gave a "shout out" to Leadership Academy grad Linda Hill (Portelos's nemesis) and in her interview with Gotham Schools she talked about strengthening the role of superintendents and networks.

If you thought Farina was going to send in the cavalry to clean up principals, networks, or superintendents, it looks like you may be disappointed.

Disappointment would mean expectations. I have none. I stopped a long time ago expecting any administrator, especially those above the "building level" to do the right thing. No matter what the title. To me, Mulgrew=Bloomberg=Weingarten=DeBlasio=whoever else you want to put in the equation.
Now if the folks want show me how wrong I am, they should go for it, but they won't. That would risk exposure.

The real question here is, who told Michelle Lloyd-Bey to keep hands off. Something really stinks here-It is definitely NOT Lloyd-Bey.

No deal on the networks!!! They aren't going anywhere. Useless former administrators responsible for 20+ schools. What a joke!! What a waste! The DOE is too heavily involved with the networks to end them. Robert Hughes, CEO of New Visions is a mastermind who legally has put the DOE in a bind. They cannot just release him AND Mulgrew is a board member on New Visions. Every part is corrupt from top to bottom. It's disgusting Chaz. One if the first things Fariña should do is to wipe out these corrupt, useless networks that plug in their own to administrative positions. My dope principal was handed the job from New Visions and she was given it based on her return of rehiring them each year. That was the deal. These networks are golden. You want me to make you a principal? No problem, retain my network forever. It's that simple Chaz!! I personally heard my principal wanting to dump New Visions because all networks work on a 1 year contract, but she won't because they gave her the job. Eric Nadelstern said that "districts" were corrupt? He was prob right but these networks are doubled corrupt.

"Meet the new boss. Same as the old boss."
The Who, "Won't Get Fooled Again"

Now that's a story for the NY Times! Let them look the amount of money that this is wasting.

I have been hearing many rumors that Marcella Sills was protected by a few of "the 18" top people at Tweed. However, I could not track down who or whom protected her all these years.

As for Michelle Lloyd-Bey, she failed to provide oversight and when alerted to Ms. Sills "time and attendance" issue did nothing about it. That's why she should be fired.

Thanks for the shout-out Chaz. Sills became principal while Kathy Kashin was regional Supt. Was she forced to take Sills?
I had friends and contacts at PS 106, people whose career's Sills ruined. Every year 3 grand of library money would disappear - no books ordered - and Lloyd-Bey was notified.
Lloyd-Bey has always been the good soldier -- even in the closign of Far Rock HS many years ago she helped the principal go after a non-tenured teacher who raised questions.
She was an enthusiastic school closer. She has no excuse.

The doe is filled with bad admin. they ruin careers. what about the bad principals at schools like far rock, campus magnet and john bowne. I heard john bowne got a b on its last report card. what a joke!!!

The person to remove Lloyd Bey must be spearheaded by the top state education official. She has known about the issues since 2005. She should not only be removed she should be prosecuted as well. By the way doesn't seem like an audit of the budget was ever done in the last decade. Makes one thibk where hundreds of thousands of dollars if not millions went. Why hasn't Carmen Farina or the mayor been down to that school to speak to people? Because it's easier to brush things under the rug than to deal with the issues at hand. The AP that sills brought in is still there and will continue the retaliatory practices against staff nemners that sills instilled while she was there. Too many people have their hands dirty in this one and they ALL need to go immediately.