Changes The Union Must Push The DOE To Do For The Next Contract. 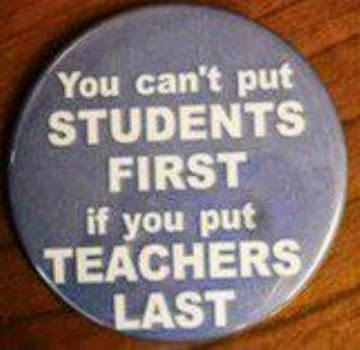 Presently, the union and the City are negotiating a new contract and there is optimism that a final contract will be hammered out by June.  What should the contract include beside the money owed to the educators?  Here are some of my suggestions that our union should be insisting on that it include in the negotiations and the final, agreed upon, contract.

A fair and less punitive "teacher evaluation system" with a significant reduction in paperwork and having a "peer review" as part of the system.  Every school I travel weekly to, the teachers are under stress with too much paperwork, a fear of snapshot observations, and administrators who are using the Danielson Framework and Common Core as a weapon against teachers they target.

All salaries should come out of DOE Central and not the schools.  Since all of us are DOE employees, our salaries should come from the DOE.  In turn, the DOE allocates teaching units to each school and the school can hire a "quality teacher" without worrying about the teacher's salary. Another advantage would be that principals would be less inclined to abuse the "sixth period" for teachers since there would be little incentive to give teachers a "sixth period" since all funding for teacher salaries come from the DOE and not just the sixth period classes.

The end of the ATR pool by bringing back the excessing requirements.  No outside hires are allowed if the District has teachers in the subject area in excess. All hires from the ATR pool are "provisional hires" and at the end of the school year the Principal and teacher will decide if the school is a good fit and if so, the teacher is appointed and given building seniority. If not the teacher is excessed and will apply for vacancies in their District for the next school year.

For teachers who were subject to discipline that had a substantiated OSI or SCI  report but whose charges were found  to be embellished, frivolous, or untrue by an independent State arbitrator in the 3020-a process, should have the discipline flag removed from their files.  These termination charges could not even reach the level of the "preponderance of evidence" standard used in these matters and its unfair to label the educator as guilty of these accusatory charges when the evidence showed they were not. The 'scarlet letter" was eliminated in the 1700's and the DOE should not be using it now.  The MORE caucus has this in its contract demands and our union should as well.

And how will the "provisional hire" status of the ATR affect their chance to be hired permanently? I can certainly foresee an abuse of this by principals and APs. They can offer living environment one year and then at the end of the year, tell the ATR that they are not offering living environment next year, but earth science instead, so they "have" to excess the ATR. This is a ruse that's been going on for some time now. Also, there is the very real chance that a provisional hire will be treated differently than a permanent staff member, perhaps having extra duties piled on for them and they feeling pressured to do the extra stuff in order to be taken on permanently.

Chaz,
The pay scale is absurd. How can it take 22 years to hit top salary? That is disgusting. Cops and fire fighters are retiring after 20. The headings are ridiculous also, MA (PD) etc. Just stupid misunderstanding visual headings on pay scale. The starting salary should be increased to attract and top pay should come after 5 years like most other civil service. This will eliminate principals wanting to hire particular salary people because top pay will come quicker. 22 years is pathetic. How can it take 22 years to hit top pay while individuals want teachers "out" before 10? So stupid.

Its all moot. Everyone, including me, wants to resign asap. Kids are disgusting, its a game of gotcha, its a total lose-lose situation, ATR or not.

How can one spend a whole career, which is basically awhole life getting treated like garbage? Who cares about the money. Not worth it. Im done after this glad. Ill find another way. Not worth meeting death at 35 years old. Dangerous neighborhoods, lowlife kids, no respect...list goes on and on.

All of the evaulations done by the disgusting field supervisors need to be erased - they are meaningless and just a means to fire teachers with many years of experience. It is a horrible experience to go through and these observations need to be thrown out.

2:18 is on target. I have a recurring fantasy that I walk out the door in the middle of the day and never come back.

have to decide if you want to spend your one and only life getting abused, not for me anymore.

EVERY TEACHER I MEET IS MISERABLE AND WANTS OUT ASAP INCLUDING ME ! I would rather fold sweaters at the gap than work for the nasty DOE

Amazing part is UFT does absolutely nothing. I have been speaking to a lawyer, a lawsuit will soon be filed. Any judge with common sense would see there is no precedent for any of these things mentioned, and the lack of action is cause for a claim. At least the media would get involved.

Don't worry, Sill, Amy, and Mulgrew will be sitting in the office tomorrow collecting money while you are being told to suck someone's private part...

Agree- eliminate the C6. Keep the duty free lunch and free prep and everybody teaches 6 classes. You just saved a ton of money with that one, Carmen

By eliminating the financial factor, the 95% refusal rate for "provisional hires" will be drastically reduced. At this point its the best we can hope for.

I suspect that there will be significantly more than 5,000 teachers leaving the system at year's end when a new contract is signed.

I agree with you. Everybody is talking about leaving ASAP.

Any shot you can speak with union sources atr council and write a post on Jeffrey win grad?

It seems many people have been hosed by that douchebag

Love reading these little cry babies in here. Wahha waa wahhh. Boo Hooo. LEAVE ALREADY!!!!!!! You people are pathetic. This sucks, that sucks, I'm being treated bad, people are out to get me. What a bunch if lunatics on here. LEAVE THE DOE. Stop bitching and GO!!!!

You are a very sick person. (Anon 8:41) People have dedicated 15yrs or more to help students and are told they are no longer needed. What other profession would stand for that type of treatment. You need some empathy for the teachers who are being mistreated. Wake up my sick friend before its too late. Enjoy reading the nonsense that you write on this blog. Keep them coming. Just love the comic relief. You have an untapped talent.

I cannot believe what the heck is going on in this insane world of education in NYC. Here you have many great professionals highly educated having to deal with this idiot bloomberg created bull shit. That fregan wiesel left us with this ridiculous staffing insanity which seems to persist day after day. In its simplest form, you have several thousand educators, teachers. guidance counselors, social workers and secretaries who are staff members working for the department of education in NYC. However, there seems to be this wave of fogginess which lingers and lingers and lingers for no apparent reason. I mean, are you fregan kidding me?? The resources available to the DOE with this pool of educators is amazing and the kids of NYC can benefit immensely by beefing us staffs with smaller classes, kids will get social emotional help with counselors and social workers, classrooms sizes can be smaller for more effective instruction, school office hubs can run smooth with the infusion of secretaries and on and on....yet we seem to be caught up in this "what do do" with excessed educators from so called "failed schools". Come on please can we please end this insanity!!!!! Come on DIblasio please

In addition to this, I propose the following: that anytime a child is being interviewed by an investigator, the chapter leader must be in the room to observe the process. They should not say anything or interfere, but may simply sit in the corner taking notes. As it stands right now, whenever a child goes into a room with an investigator, we have no idea what is actually being said. Therefore, it is imperative to allow some transparency in this process.

How about the rumored seniority bump in lieu of full retro? A lot of us are praying for that!

Please leave the kids out of your comments when voicing distaste over DOE injustices .

1 or two year retirement incentives would lead to a large number of people leaving but I hope there is one in new contract.

Chaz
Most of the time I agree with what you write and propose, but there is one issue you are so oblivious to, and that is about staffing. It doesn't matter if all teachers were to be funded by Central; Principals will still choose UNTENURED newbies who don't know the contract over tenured veterans who know the rules. Randi sold us down the river when she agreed to get rid of seniority. Without this, principals can now choose neophytes who have nothing backing them. As an ATR I see untenured teachers working past their hours and no idea what "per session" means. Wake up, unless principals are made to hire ATRS permanently, all we can hope for is that there is such an exodus after the new contract that principals will be forced to take us. And ATRs should refuse to sign any provisional contracts for any open spots due to retirements, tranfers or people quitting.

Unfortunately, the students are an issue when the school administration does not take strident discipline seriously. Moreover, students tend to lie and when its about their teachers its automatically believed and that is an issue.

Chaz,
Of course, your charges, which were untrue, were not *found* to be untrue in the technical sense you described here. Are you proposing that teachers in your shoes should continue to have the red flag ? Please explain.

If I understand your question correctly the answer is no.

If one is investigated for corporal punishment, sexual misconduct, or financial issues and the "preponderance of evidence" shows that such misconduct did not occur. Then the so-called "substantiated" OSI or SCI investigation is found to be wrong.

Being accused but with no evidence to justify the charge, any red flag needs and should be removed.