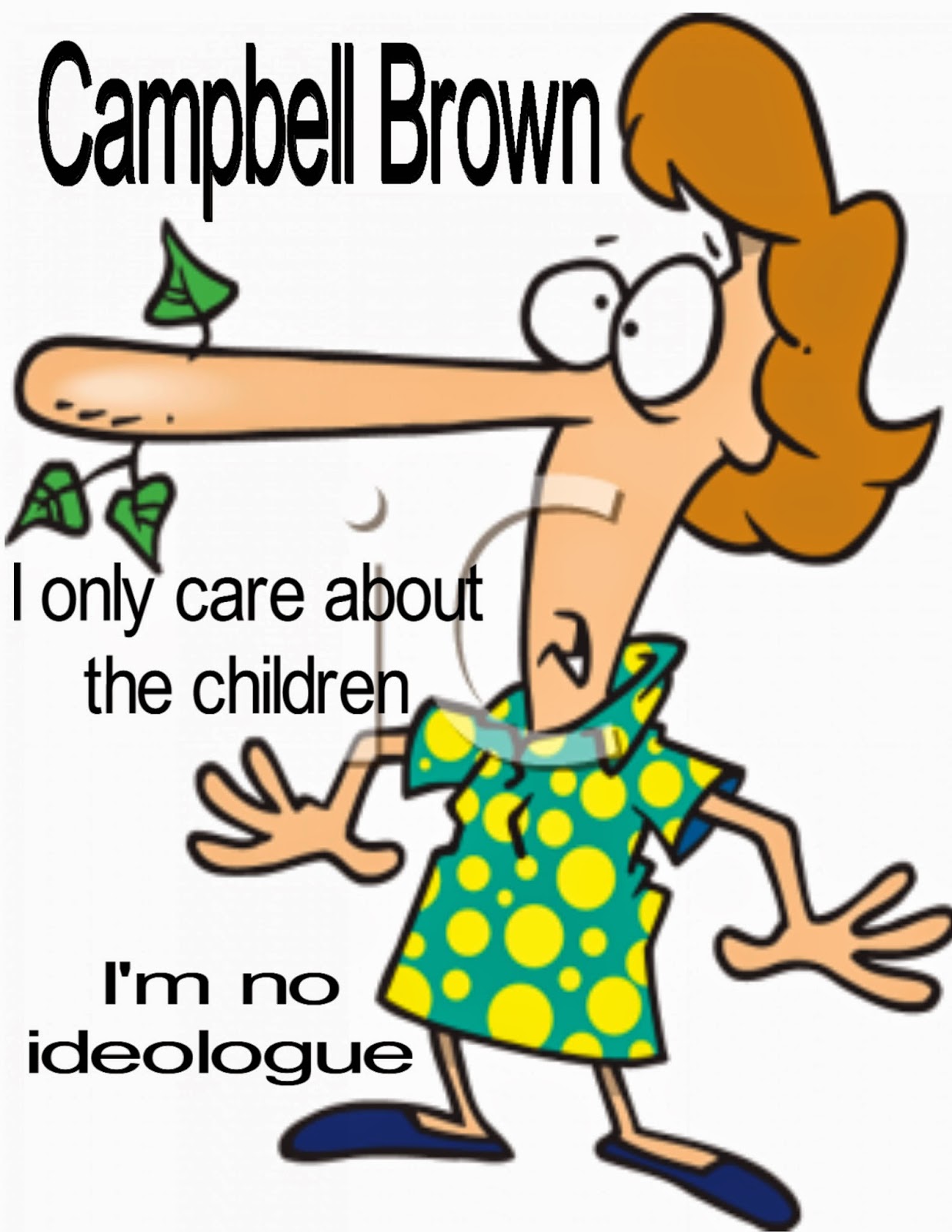 In the New York Post today the clueless Campbell Brown wrote an article called A 'common sense' NYC teachers contract.  In the article she recommended what changes should be made in the next teachers contract being negotiated with the De Blasio administration.  Of course, she's still on the kick that teachers accused of sexual misconduct should be terminated by the Chancellor even when the independent arbitrator, who are selected by both sides, when presented with the actual evidence or lack thereof found no sexual misconduct.

Interestingly, Campbell Brown now suddenly demands that parents and students have input into the process.  Funny, when Michael Bloomberg was Mayor and excluded parent and student input, Ms. Brown never bothered to include that in her demands.  I wonder why the change of heart? Furthermore, Ms. Brown wants ATRs to have a time limit while failing to identify the real problem the "fair student funding" that forces principals to hire the "cheapest" and not the "best teachers" for their students. Moreover, Ms. Brown wants "merit pay" and eliminate seniority and education as a factor to determine salary level.  Finally, Ms. Brown wants teachers to be available 24 hours a day for parent correspondence, as if we teachers don't have families and obligations of our own.Her ideology seems to interfer with the facts but that's nothing new when it comes to the clueless Campbell Brown.

The bottom line is that Campbell Brown's 'common sense' contract lacks "common sense" since she ignores the root cause of the issues and her ideological bent is showing by first ignoring Mayor Michael Bloomberg's exclusion of parent input only to demand it now that Bill de Blasio is Mayor.  To me Campbell Brown is clueless, a hypocrite, and most importantly, an ideologue that ignores the facts just to get her warped point of view some attention.

Note:  As I predicted, Leslie Brody of the Wall Street Journal conveniently ignored my letter to her and failed to mention the role the DOE budgeting practice that resulted in the formation and maintenance of the ATR pool.  In no place in her article did she mention the "fair student funding" that required principals to hire the "cheapest" and not the "best teachers" for their students.  To me her failure to mention this shows that she is a corporate education reformer since these groups must  ignore this issue to demonize veteran teachers.   While her article didn't call the ATRs "unwanted or bad teachers".  Her failure to address the DOE budgeting issue was a "fatal flaw" and shows that she either doesn't understand the process or refused to write about it since it wasn't convenient to what she was telling the public.  In either case, Leslie Brody did a poor job explaining the problem.

Michael Mulgrew was quoted in the article that three quaters of the ATRs are offered positions.  However, he was being disingenuous since approximately 5% of them are actually appointed to a permanent position the rest are covering long-term leave replacements or "provisional hires" who will be dumped back into the ATR pool at year's end.

Who the hell is Campbell Brown and by what credentials does she have the right to dictate what our contract should be? She is a vacuous talking head parodied on Saturday Night Live. So the NY Pox allows her to write an article?! She'll say anything and do anything that will promote her self image (including bragging about changing religions). Ms. Brown, stick your nose into something where you can make a difference - like advocating for those with delusions of grandeur.

Ms. Brown is a whore.

I really got a chuckle out of post of stating teachers don't have to call in for 20 days! In my school you need a doctor's note after 3 days. You have to call in every morning you are sick or else they call you!

Question- Why isn't Campbell Brown writing about principal Angelyn Donald of PS 386 who knew there was sexual predator at her school but did nothing. Ms. Donald was punished by being removed and is still on payroll. Read the Daily News today!

Campbell Brown has been fired from every news position she has ever had. I hope she never gets hired again by anyone - even though that will give her lots of time to bash us, She is a clueless incompetent jerk and no one listens to anything she has to say. Maybe she can find another hobby instead of bashing teachers to keep her busy - any suggestions?

I love how "critics" like Campbell Brown try to portray themselves as educational employment experts. Has she ever taught? Has she ever talked with real teachers? Has she even stepped foot in a middle school in The South Bronx or in Harlem? She has no idea of the reality of working in an inner city NYC school. She is no more of an expert on deciding teacher contracts than I am on deciding newspaper writer contracts.

Mulgrew? Disingenuous? The heck you say?
Next you will tell me the easter bunny and santa arent real.

Campbell Brown needs to sit her ass down somewhere and cook a can of soup.

PART 1
Osman Daramy,12, and Krystal Callender, 13, are led out of court. They are suspected of attacking a Muslim students and mugging delivery man Elis Misaud.
On March 15, Elis Misaud, the delivery guy for Frank’s Pizzeria, carried two boxes with cheese pies and two liters of soda to the front entrance of Berta Dreyfus Intermediate School 49. Teachers had ordered the refreshments for an after-school tutoring program. The snacks never arrived.

It was 4 p.m., broad daylight, when they pounced. Two girls and five boys, aged 11 to 14, surrounded Misaud and pummeled his face with fists.

“They punched me on my head, grabbed the pizza and soda, and ran,” said Misaud, 21.

The stunned Misaud said he went inside to the report the mugging, and left. The school never paid the $21.50 tab. And his attackers didn’t bother to hide. They sat under a tree on school grounds, munching on their booty.

The brazen robbery by baby-faced bandits has touched off a war on Staten Island, where neighbors and business owners are demanding that the city Department of Education do something about the fight-plagued school — one of the most dangerous in the city.

“There’s a cry from the neighborhood that this school is out of control. We need somebody to take charge,” said Stapleton businessman Peter Lisi, a member of the Staten Island Community Watch Council.

Teachers, afraid of retaliation by their supervisors as well as the young ruffians, are voicing desperation in leaked messages to the media.

The mayhem-filled middle school is the perfect example of how violence and disorder can escalate when school leaders lose trust among staff — and shut out the community.

The unruly school drew national attention when two of the alleged pizza robbers, Krystal Callender, 13, and Osman Daramy, 12, viciously attacked a 12-year-old classmate — shoving her to the ground, demanding to know if she was Muslim, and yanking her headscarf, cops said. Krystal had just returned from a suspension for swiping $70 from a teacher’s purse during a math lesson. She and Daramy were charged with hate crimes.

“The inmates are running the asylum. The students know they can do what they want and get away it,” one said. “Staff is fearful for their safety.”

Teachers are assaulted or get hurt breaking up fights. “The hallways are just total chaos. Kids run up and down, yelling profanities. While class is in session, they pound on your door,” a staffer said.

Last month, two sixth-graders broke into a locked closet and stole a teacher’s purse, taking the valuables and trying to flush the bag down the toilet. A 12-year-old girl brought a box-cutter to school in her purse, cops said.

But staffers say school administrators try to hide the discipline problems. They closed the usually busy “suspension room” when a team of city and state officials visited recently. Department of Education spokeswoman Marge Feinberg said the room was closed that day because of a staff absence.

Dreyfus made the state’s list of “persistently dangerous” schools in 2007, but was removed in 2008 after reporting fewer incidents.

It then tallied an astounding 339 “violent and disruptive” incidents in 2008-09, the latest data show. That included 183 “minor altercations” — more than any other city school — six sex offenses and 24 assaults, including two with weapons. That was enough to put Dreyfus back on the dreaded list if the crime wave repeated another year, but it improved in 2009-10, said state education department spokesman Tom Dunn.

Not so, one staffer told The Post. “It’s worse than ever.”

There are allegations that administrators are falsely boosting the school. The DOE’s Office of Special Investigations has spent months probing allegations that Principal Hill directed teachers to have students fill out “learning environment” surveys in the names of their parents. The DOE uses the surveys to give points in its school progress reports.

Feinberg said Hill denied the accusation, but did not respond to repeated questions about the probe. One staffer said of Hill, “She’s like Gotti. It’s like she has Teflon around her.”

Feinberg said Hill is working with the Anti-Defamation League and imans at a local mosque to help foster tolerance in school. Dreyfus also held a “We Are One Community” family night.

Lisi’s group is urging the DOE to do more. Lisi said he called Principal Hill to offer the support of his neighborhood watch group. She rudely rebuffed his offer, he said, calling him “racist, biased and prejudiced,” and accusing him of not caring about the school.

A woman who has lived across the street since Dreyfus was built said Hill also ignored her requests to meet. “The kids run rampant after school,” she said. “They scratch the cars with keys and sit on them. If you ask them to move, they curse you out.”

When kids fight, she added, security guards do little but shoo them up or down the street. “They say they’re not responsible if it doesn’t happen on school property. They tell me to call 911.”

“Staff needs to feel supported and backed by a strong discipline system, so they’re not afraid to deal with badly behaving kids or don’t over-react,” Trump said. And the school must be “connected and engaged to the broader community.”

For a start, community leaders have one question: How did things get so bad in New York City that middle schoolers are now muggers?

You should have seen her on Fox 5 news yesterday, claiming that most teachers prefer a 3-page, complexity free contract to the one we have now with all the work rules. What a joke! Who'd she speak with? Some pie-eyed newbies willing ti show their "commitment" to the kids?

UFT and AFT exist to protect bad teachers. Kudos to Campbell Brown for speaking the truth.