Few ATRs Will Be Hired This Year Or Next. 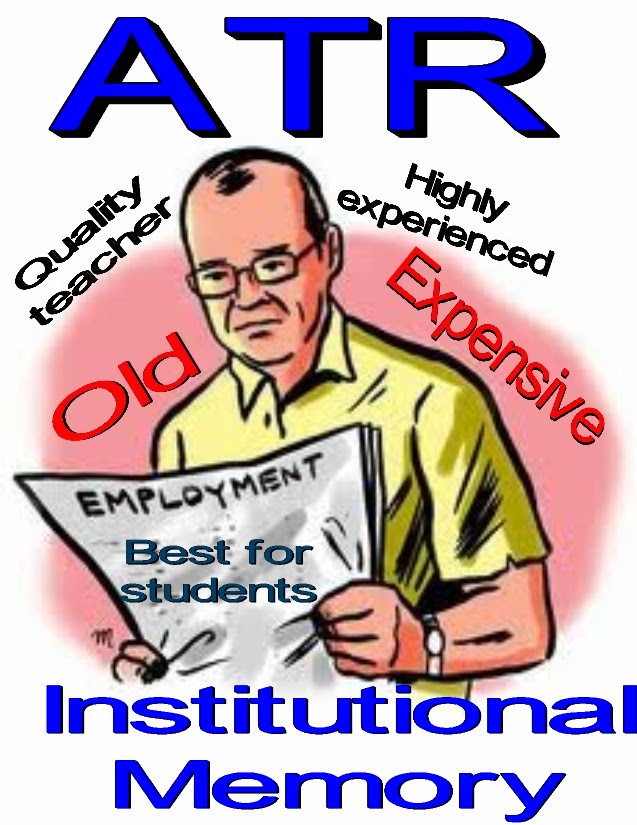 The union and the DOE reached an agreement that will make it difficult for principals to hire ATRs to fill vacancies for the next two years.  True, the new ATR agreement will require principals to hire ATRs to "provisionally" fill their vacancies after October 15.  However, by that time the only vacancies that will be available will be in the "hard to staff" schools where teachers have quit after the school year started.  Moreover, while the school will get the ATR for the "average teacher salary" of the school the first year and "zero" for the second year.  The problem is the third year when the ATR's full salary will be dumped on the school's budget.  How many principals will be willing to do  that?  Not many, if any.  In other words, the ATRs will have little opportunity to land an appointed position at most schools. Its business as usual.  By the way, what stops the DOE from ignoring the agreement as they have done many times previously?  Nothing, nothing at all. 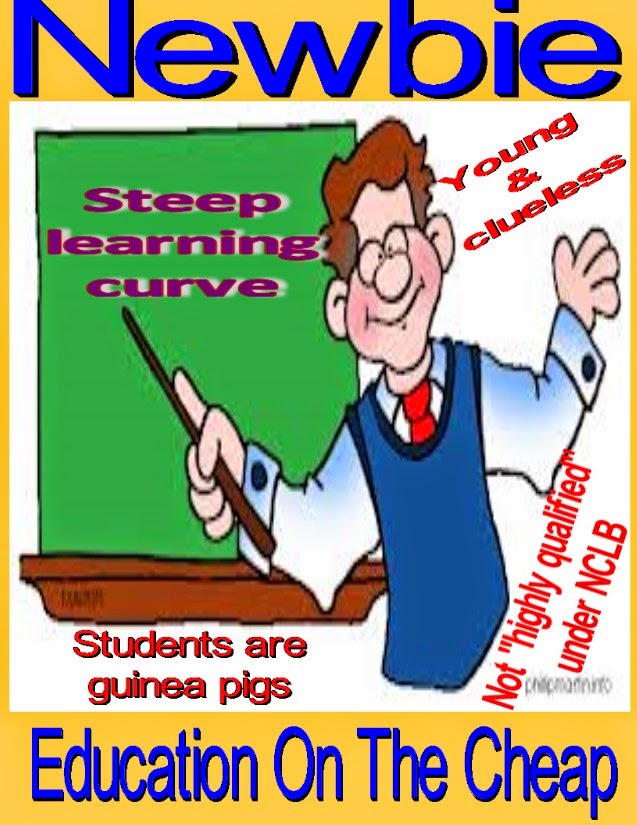 The main culprit is the "fair student funding" and that will not change in the new contract.  For people unfamiliar with the "fair student funding", it simply punishes schools from hiring veteran teachers since the school budget is given a fixed amount of funds that principals can use as they see fit.  The result is that most principals and especially the "Leadership Academy " principals will simply hire the "cheapest" and not the "best teachers" for their schools.  Now that the last vestiges of the hiring freeze is gone, principals are free to hire whomever they please and since their budget is more important than what's best for their students, look for the schools to hire the many "newbie teachers" that their limited budget can accommodate.  What's not said is that if a principal hires an ATR before October 16, than the ATRs full salary must be included in the school's budget, another disincentive for hiring ATRs.

Presently, there are 1,200 ATRs participating in a useless and disheartening weekly rotation, while another 1,200 more are covering provisional vacancies or long-term leave replacements who will be excessed at the end of the school year.  Combine that with more excessing expected in many schools as new small and charter schools reduce the public school population of existing schools and the closing of some schools like Jamaica and Beach Channel High Schools so by the summer the ATR pool will grow to 2,500+.  Of those only the least experienced, untenured, and least expensive teachers will be offered positions.  The rest will need to wait until after October 15 to be offered a mandatory interview and only those that have never went through a 3020-a process or were "U rated" this year.

Remember, Chancellor Carmen Farina said that only 400 ATRs are capable of teaching.  Where did she get that figure from?  Easy, these are the teachers who never went through the 3020-a discipline process, received a "U rating" or never was investigated by the curropt OSI and SCI investigative units.  In other words, she assumes, just like in the Bloomberg administration,  that all the other ATRs are guilty of something and don't deserve a classroom of their own.  Change of tone?  Yeah, right! Let's see if the veteran ATRs even get interviews in the farce known as the Open Market Transfer System.  I don't think they will.

Finally, one of the two creators of the utterly useless weekly rotation, Human Resources Chief Larry Becker  (the other one being the recently retired UFT leader Michael Mandel) has warned principals not to over do the hiring of  "newbie teachers" and to hire the ATRs.  I'm sure he couldn't keep a straight face when he made that statement since he knows very well that the DOE policies that he has implemented actually encourages the schools to hire novice teachers.    While the DOE and UFT may talk a good game they have deliberately made the playing field even more uneven and reduced the already slim chances of a veteran ATR to be hired. What are the chances of a veteran ATR getting an appointed position in a decent school? As the late Rodney Dangerfield once  said "Its like a one legged man winning an ass kicking contest".  Maybe winning the lottery has better odds than a veteran ATR has to land an appointed position.

placed in schools with no vacancy? That's how it was with me before the rotation started 3 years ago. I was placed in a school the whole year and did coverages.

Hold up. If you get a U this year you won't be placed ? Where does it say that in the contract ? I knew about the 3020 winners but U rated also? Wow That means another year with my dishonest ATR supervisor. What a waste. I can teach. The kids have repeatedly expressed their preference for me over staff teachers once they see me teach

Why in the world would a principal hire an ATR before October 15th if the full salary goes on the schools budget? That's insane and obviously ridiculous. After the 15th, ATR's are forced placed? This is absurd. I mean I've never heard of a union doing this to it's members com not an ATR but even so, this is crazy behavior. What principal in their right mind would even consider hiring prior to the Oct 15th cutoff? They're really making it difficult. I'm very sorry to those of you in this uncomfortable, doomed position.

Mulgrew stabbed the ATR's right in the back with his duplicitous and dishonest behavior. He does not put children first. He actually puts his self-interest before anyone else. He is not fit to be union leader. He needs to find another profession where his behavior would be a good fit.

ATRs have to stop begging the UFT for help and organize fast. By the way, I am the guy who bet you that your numbers on what we would get in the contract were way too high. I won't say I told you so but corrupt union officials convincing naive teachers to accept garbage was not hard to forecast.

Agree the incentive has been given to a principal to wait for the last minute or second to hire an ATR
What a pitiful union..
common sense would have been to give a principal an incentive to hire before Oct. 15( like during the summer) thus helping place those who have been loyal to the DOE
and find themselves in this cesspool
Dont know why we should expect common sense

Consider the irony: the pure ATRs placed in schools face hurried termination for problematic stuff,
but we impure ATRs frozen in rotation get the good old 3020-a treatment for crimes against humanity, DOE-style. Wouldn't it be nice if Mulgrew or one of his useful idiots dared to face our ranks in a meeting? Failing that, when are we going to march on 52 Broadway for answers? Chaz, as a member of the Amy's and Mike's Potemkin ATR advisory group, you should be able to get something out of them. Go for it. You are our Zola!

Class Action Law Suit.....against the NYCDOE and the UFT.

Now this is going to be interesting.

against the UFT and DOE


There is an ATR protest at Tweed on Tuesday. It starts at 4pm. See you there.

Email the following:betsy.combier@gmail.com if you are interested in being part of a class action suit.

Once when I complained to Mulgrew about the Fair Funding Formula standing in the way of ATRs being hired and experienced teachers being able to transfer to other schools he told me that it was not part of the contract but DOE policy and they were working on changing it. So?? Is it in the contract or not?

If you are an ATR and you don't jump on the class action lawsuit, you are dumb.That lawsuit is going to win.Can't see how different sets of members have different due process rights.

The class action suit is the best recommendation yet! The process is based on blatant age and salary discrimination.

I have no confidence in the union and they had multiple opportunities to defend us from the propaganda attacks in the media. Between the media, abusive administrators, illegal observations and now this contract the ATR's need to sue to union and city (including damages).

Thanks chaz for the bad news that the union has sold us out yet again.

Betsy might be a paralegal, but she works with a law firm so she can initiate lawsuits.ATR'S will win this one,no doubt in my mind.

While all your posts are great, you would do all ATRs a great service by researching the feasibility of a class action suit for ATRs...and titling it the same.

You are the lead person Eric, whether you know it or not.

I work as a paralegal on issues such as 3020-a probable cause, due process, tenure rights. I cannot do a lawsuit myself as I am not an Attorney but I have already spoken to one of the law firms I work with and they are interested in the ATR situation. We just filed a federal lawsuit this week on stopping any 3020-a that does not have the proper determination of probable cause.

A couple of years ago at a borough wide ATR meeting with Amy Arundle (after the last contract expired), I asked Amy Arundle if negotiations were being made to protect ATRs....she said absolutely, wait for the next contract, and that we should trust her.

During the weekly rotation, can ATRs be brought up accusations of unprofessional behavior? If so, ATRs will become virtual slaves out of fear. No more saying no to toilet duty, 7 periods, etc.

ATRs in rotation cannot be brought up on charges of problematic behavior and are not subject to the one day 30290-a hearing.

Is there a class action lawsuit and if so how can I become part of it? I am a 3020 survivor and have been an ATR for 7 years now.