Why The Union Leadership Betrayed Their Members. 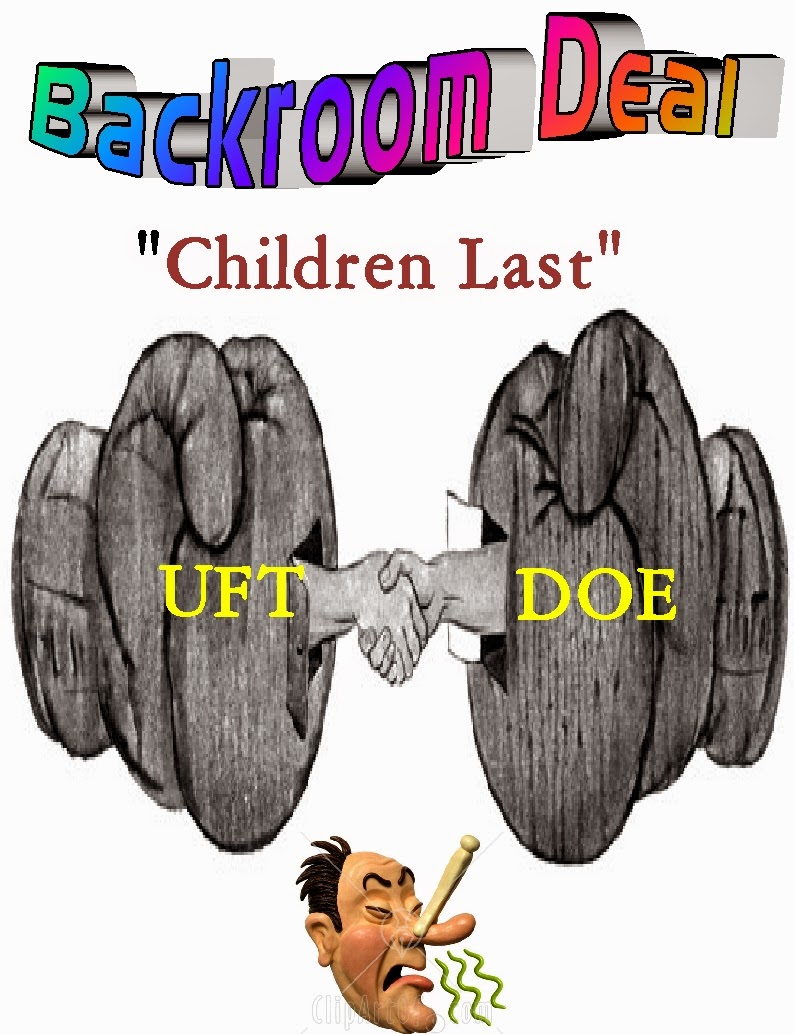 As expected, the union was able to convince three out of the four members to vote "yes"  by employing "scare tactics" to pass the inferior contract negotiated in a backroom deal with the Bill de Blasio Administration. This deal showed that for the union leadership it was more important to help Mayor Bill de Blasio succeed as Mayor than doing what's right for the members.

The union sent out its entire office staff to the schools and scared the members by claiming that if they don't vote yes, the members would be sent to the back of the line and the City will not have the money to pay for our raises.  Left unsaid is that if we let the police go first, we would not be getting eighteen months of "0" raises and we would certaionly have not made ATRs second class citizens.

The raises negotiated, 10% for 7 years, comes out to 1.43% a year or less than the Metropolitan area inflation rate of 2.31% for the last three years. That's right!  Even if you add the retroactive raises, the 2% raises for the 9 year length of the contract is less than the inflation rate!   Worse if a member resigns, is discontinued, gets terminated, or die, they do not receive the retroactive raises or lump sum payments.  The members must make it to retirement age to realize the puny gains in the contract.

As bad as the inferior and deferred raises are, some not being paid until October 2020, the union leadership's agreement to a "caste system" for the ATRs is simply a betrayal to those members.  No other Municipal union would agree to make some of its members a second class citizen as our union leadership did. In fact, the union leadership actually agreed to a "caste system" as ATRs, known as the "untouchables" who won their 3020-a termination hearings will be punished a second time by the DOE by not being offered interviews.  For the ATRs who came from closing or closed schools or who were excessed by downsizing, will be subject to "forced placements" and a reduced "due process rights" by being subject to an expedited one day 3020-a hearing due to "problematic behavior".  Now the DOE has eliminated the hiring freeze and with the continuation of "fair student funding" will any ATRs be hired if they are tenured and make $75,000+?  I highly doubt it.

The union leadership betrayed all their members by agreeing to inferior and deferred raises, not getting full retroactivity, not paying the over 4,000 teachers who left the system, and agreeing to a DOE imposed "caste system" for ATRs. and allowing the ATRs who won their 3020-a termination hearings, now known as the "untouchables" to be punished a seond time by the DOE.

Shame on the union leadership who betrayed their members in their backroom deal with the City and cared more about appeasing the new Mayor and Chancellor and if that means an inferior contract and selling out the ATRs, so be it.
Posted by Chaz at 5:32 PM

Sure hope those 4000 something former members, not receiving retro pay for time worked, file a class action suit.

For that matter, the ATRs should also, against both the UFT and the DOE for negotiating a contract that does not honor due process for a specific cohort of members, while the other members are entitled to due orocess by law. Says it all about DeBlasio, our flat tire of a mayor.

And then another class action suit for anyone who leaves before they can receive full retro.
Get those suits going!

And now let us here from the 77% that live in the real world. Don't you read the papers and see how they are killing our sisters and brothers in Chicago, Philly, LA, New Orleans, DC and the rest.

No givebacks, No layoffs. We are the only ones still working.

There will be no vacancies for the atrs to fill after October 15th. The principals will make sure of that.

ATRs should file a class action suit. To not do it would be stupid on their part.

What do you think is going to happen to the ATRs with the behavior management program and the expedited termination process? No layoffs here right? Keep me posted.

We need your analysis on the latest news of lifting the hiring freeze. This sounds like the ATRs will be shafted again. Talk about something truly rotten in the state of Denmark!

Chaz here are two quotes from an earlier TDA article you posted:


The advantage of the TDA is that all contributions and appreciation grows inside the TDA tax free until the educator is ready to withdrawal the money at retirement and the educator is at least 59.5 years of age.


The bottom line is the more you contribute to the TDA, the more your money appreciates tax free until you start to withdraw it in retirement or when you reach the age of 70.5

I am a bit confused. Kindly answer this one question:
If I retire at age 55 with 30 years in the system, can I collect all TDA funds upon retirement (without penalty)or MUST I WAIT till 59.5/70.5.

I always thought one can collect (without penalty) TDA immediately after leaving the system.

Here are my two cents from Newark. Veteran teachers are excised into the pool and are replaced by novices, a large number of whom are TFA. My school has posted openings for four positions currently held by veteran teachers including me. Three administrators have been unsuccessful in responding to my queries.

Same Ol whining by the same Ol readers on this blog. The less than 15 posters who are regulars here are miserable, complainers who have literally no people skills or strategizing skill set. As for me and most of my friends and colleagues and the tens of thousands of others who are actually happy, we will wait the years (since we are not retiring anyway) for the pay. I will be more than ecstatic to beaking 120K just 4 years from now guaranteed, unlike other states across America. Throw the per session in and some other crap, easily 140-150K. Are you serious Chaz and the rest of the complainers on here?? Yeah, keep complaining! Can't wait for the fist jerk to respond, "It can be you one day, you can become an ATR". Nooo, I and tens of thousands have a skill set beyond teaching. We are able to survive, unlike the whiners.

Mulgrew is incompetent. I hope the 4,000 former teachers sue the union and city. Their victory will be our victory too. How can the union negotiate something like this in the contract. How can Mulgrew sellout middle class workers the way he did? I suspect a conflict of interest on Mulgrew's part. Next will be the ATR's who will come forward and sue. Mulgrew is complicit in the discrimination of senior teachers who were excessed through no fault of their own. Tell the union leadership to stop practicing discrimination against their members.

Just continue to keep your head stuck in the ground. Its people like you that allows our union leadership to screw its members.

Remember, it may not happen to you but it will happen to somebody you know.

since you love attention and suffer from lack of attention ..here is some attention just for you.....you write on this blog about how you have a skill set beyond teaching. Your skill set is that you are the biggest whiner out there....I am glad things are so great for you and your colleagues but your union has been weakened by this latest contract . You are just too dumb to figure that out. Keep on lying to everyone, including yourself about how great you are but if you were a person with so much greatness you would see that some of your colleagues( with tenure and many years of experience) have been weakened. That also makes you weaker...try to meditate on that and see if you can figure it out OH GREAT ONE

I for one don't believe the vote. Why were the ballots sent to the schools for the Chapter Leaders, who are all sucking at the tit of the phony union, to oversee? I will never believe that that vote was not rigged. Mulgrew and all his cronies from the top lap dog to the lowliest of lackies all need to go. The have completed what a Randy and Rudy started years ago, selling out the rank and file for their own self-serving agenda.

Blah Blah Blahhhh. All the best at your new school in September.

I was talking to a former upper eschelon of the correction officers union. He told me his union used to play the same bs record to scare their members until they got a strong leader in Norman Seabrook. Seabrook said put us to the back of line we won't take an inferior contract. He stood up to every threat and negotiated great contracts for his members. My acquaintance said Mulgrew is a terrible negotiator. I also explained the ATR farce and he couldn't believe it. He said it's incredibly bizarre and no NYC union would agree to that unless their leaders are incredibly inept.

I have been a atr for three years. At first I hated it. Going to a different school every week. Having to deal with incompetent administrators. Some who could not read or write. But over time I began to like being an atr. And this year in particular. Unlike regular teachers I was not subject to Danielson. In my travels to different schools all I would hear are complaints. Particularly as the year was coming to a close. Also in my travels I became aware that many schools are giving teachers a sixth period. If I had a choice I would prefer to stay an atr. However based on my observation I am certain that next year I will be placed in a school where there are vacancies. Particularly in those schools where teachers were teaching a sixth period. I would have preferred that the contract was voted down. However I know that in my discipline I will be placed in a school where the sixth period class exists.

I do not want to see the sixth period folks lose the money, but in the end, How many jobs are being taken away because of it. I am not sure if there is even a way to find out, but want to know how in the tank Mulgrew is for Tweed? He would rather make it better for Tweed, cheaper for them to pay sixth period, an not have to pay more employee benefits, not to mention how many ATRs could get placed.