No Bullying In The Schools But Peak Crime In The Subways Are Associated With School Dismissal Time. 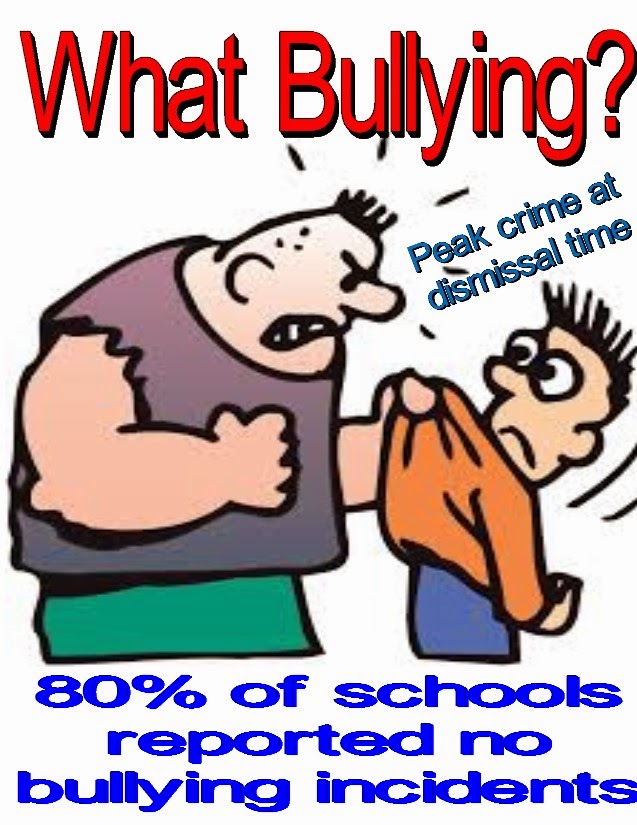 It was interesting reading today's Daily News.  Two completely separate stories were reported, one about crime in the subways, the other about lack of bullying incidents in the schools..  The first dealt with subway stations that have a high percentage of crime and the second story was on the lack of bullying complaints in the New York City schools.  If you connect the two, its very obvious that the New York City school administrators are not reporting bullying incidents so as to keep up the fiction that their schools are safe and the students are respectful and obedient.

In the first article the Daily News reported that much of the crime that occurs in the subway stations occur around the 3pm hour and many of the incidents involved school children.  The worst being the Broad Channel station which services the Rockaway Peninsula.  Other stations that reported high afternoon crime was Broadway Junction in East New York and 125th Street in Harlem. Many of the stations that had a high percentage of crime were either on the Rockaway peninsula or in West Harlem. The 3pm hour coincides with school dismissals and the connection is undeniable.

In the second article in the Daily News was the lack of bullying incidents reported by the New York City schools.  According to the newspaper an astonishing 80% of the schools reported no bullying incidents in the last school year. . Unbelievable but true.  This includes Intermediate school 117 in the Bronx where a bullied teen stabbed one of his tormentors to death. We all know that bullying is common in schools, especially the middle and high schools.  How can school administrators ignore bullying in their schools?  Easy, you just don't report it since reporting bullying incidents will be penalized by the DOE on their school grade.

Let's see, according to 80% of the schools, there is no bullying going on and the students are "perfect angles" but somehow once they leave the schools some of  these "perfect angels" in school commit criminal acts in the subway system.  I guess if you believe in the Easter Bunny, Santa Claus, and the Tooth Fairy, you can believe that there is no connection between the two but the reality is that they are connected and this is a societal issue that needs to be addressed and hiding the problems by not reporting bullying and other incidents for fear of reducing the school's grade and reputation only puts all of us at risk in and out of our schools.
Posted by Chaz at 11:06 AM

No bullying?! As a dean in the Bronx for 10 years, that's almost all I saw. The schools don't know what to do. They punish the victims instead of the perpetrators. If a kid is harassed and beaten they may get a safety transfer (if they come across a caring adult who's willing to get into trouble by the principal and the witch at 1 Fordham Plaza). The tormentors stay at the school, usually with no consequences to choose the next victim. Kids are committing suicide and purposely putting themselves in positions to get killed (train tracks, lakes, rivers,drugs). The DOE doesn't care, and staff is punished if they become too involved. Farina could really do something meaningful and save some lives.

Bullying/teasing is something that is NEVER going to go away. This is PART of what being a kid is all about. And with social media, it guarantees that bullying will not end. Parents need to stop pu**ifying their precious children and teach them to stick up for themselves.

As far as the suicides that occur... again, parents need to teach their kids to stand tall and remind them to ignore and shake it off.

I wish I could tell these kids to simply "punch him in the face" the next time he bullies you. Parents please talk to your kids and teach them how to handle teasing!! The school cannot do it all. What are we supposed to do....suspend everyone? So dumb.

The bullying took place for sometime yet the principal said it was too late do anything - Another do-nothing principal. I bet she's a Leadership Academy alum.

When I was teaching back in the seventies in Distict 9, JHS (now IS) 117 had a terrible reputation. I see it hasn't improved.

It's idiots like this that enable a culture of cruelty, starting in pre-teens, that only intensifies as these empowered youth continue to terrorize their peers (and their teachers) in High School. Ignoring the problem won't make it go away.

The bullying I've seen in Bronx High schools is not playful teasing ,as some of us have experienced while growing up. Many students suffer in silence and don't tell their parents. (They sometimes tell an adult in school, often to no avail.) Cell phones are used as cameras and the images are sent to humiliate. These images are often taken clandestantly - during sex , dressing at gym, or the bathrooms. You also have students texting pictures of their genitals to the bullied. You also have packs of kids jumping 1 kid. (These kids are often targeted for being gay, overweight or simply quiet.) There have also been rapes during these episodes; sometimes of males. Usually when a victim stands up for themselves someone goes to the hospital, jail or the grave. It's the professional duty of the adults who are aware to help, not turn a blind eye or expect the student not to be a p-ssy and fight back. Of course the schools can't do it all, but many do nothing. Many of us who do intervene are met with hostility from parents, administrators, and the bullies. Some of us have ended up as ATRs. Putting posters in every school against bullying is the DOE's only intervention method.

8:49 Excellent way to summarize the nonsense that goes on
If you say something you are seen as a troublemaker yet administration has no clue on what to do about the brutality of young people towards each other
Kids are afraid to go to school and that is the real truth and it is sad but the DOE is dead on education

Kindness and tolerance can be taught to kids from songs, like
“Be a Buddy, Not a Bully” on youtube: http://www.youtube.com/watch?v=Or7WPUtUnRo

To 9:28,
How about "Singing in the Rain" like the high schoolers in A Clockwork Orange?

I have read that in one school they are going to buy a lot of cameras after one of such accidents. Unfortunately cameras cannot stop all these terrible things. If someone plans something like this it will be done. To my mind we should try to make students as much busy at school as possible and give them less free time, I mean they should eat in the canteen and so on but it should be very little time. They go to school to study and write their papers ( read the article to get assistance in writing your papers) so make them stay in the classroom. I know that a lot of people will blame and say that children need freedom but we see the results of this freedom. All other things they can do at home. I know we have no right to blame someone but maybe school psychologist should be more attentive.

Kindness and Tolerance can be taught, yep but teach your kid that and they WILL become victims, because you better believe the parents of the Bullies are most likely Bullies themselves and wont teach their kinds any merzy.