Its Our Own Fault For The Lack Of Real Democracy And Transparency In The UFT. 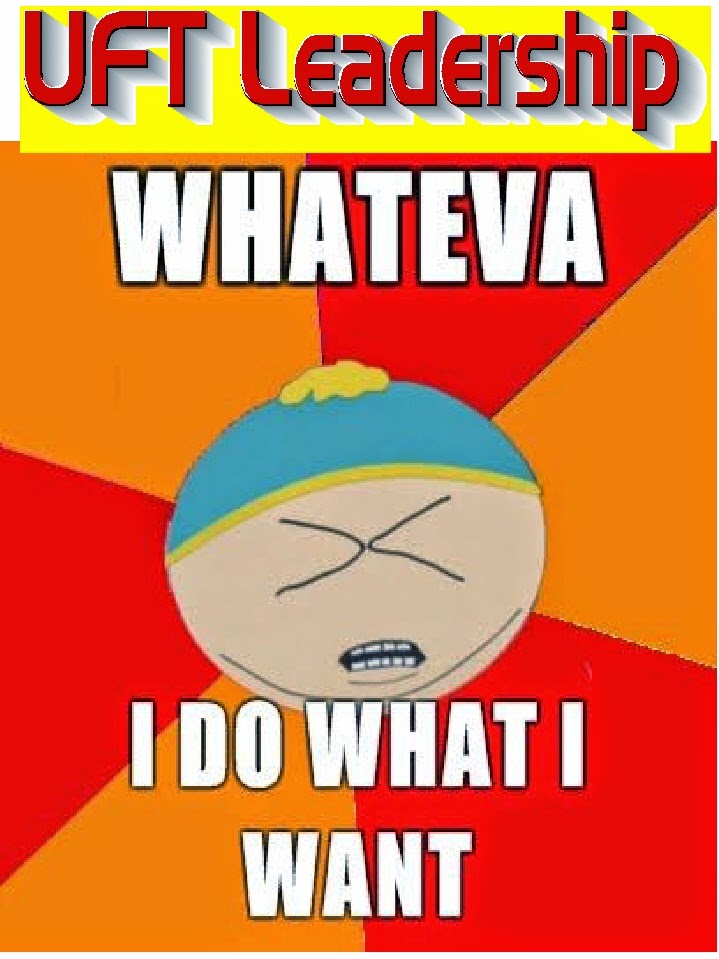 Over the years, many teachers have bemoaned the fact that our union leadership has ignored the wishes of its members.  The complaint is that the union lacks real democracy and transparency in its operation.  While I agree 100% with these teachers, the blame must be placed where it belongs and that is on ourselves.

If we look how our union operates, we see that our union is dominated by one caucus, "Unity" which requires total subservience to the leadership, where any dissent results in expulsion from the caucus and the perks that go with it.  No other caucus requires a "loyalty oath" as a condition of employment in the UFT.  Decision-making is done by a small inner circle of Unity loyalists, dominated by President Michael Mulgrew, and rather than reach out to the rank and file for their input, they impose their own political philosophy and claim that is the union's position.   Even the District Representatives are appointed by the union leadership when before Randi Wiengarten came to power the District Representative was voted on by the Democratically elected Chapter Leaders of the Borough or District,  The latest two examples of the union unaccountable leadership riding rough shot over the members were the recently negotiated inadequate contract  that threw the ATRs under the bus, deferred raises as far away as October 2020, and eliminated retroactive raises for ex members who resigned, were terminated, died, or became an Administrator, just to make the new Mayor look good.   Yeah, I know that 77% voted for the contract but it was the scare tactics used by the leadership such as "if we don't approve the contract, we go to the back of the line and the City won't have the money to pay us." that scared many members in voting for it.  Then  there was the Al Sharpton led anti-police march that the UFT co-sponsor, using member dues money to fund.

Yes, our arrogant union leadership acts like Eric Cartman and does as they please but its our fault that they can get away acting this way.  In the latest elections for UFT President, only 25% of all members actually bothered to vote and only 17% of active members.  Furthermore, retirees votes were 52% of the total vote.  The breakdown can be found in the MORE blog and the numbers are below:


The majority of UFT members did not bother to participate in these elections. Out of 173,407 ballots mailed, only 43,138 were returned. When 75% of the membership doesn’t think voting is worth their time, that’s a serious problem. We can’t read the minds of those roughly 130,000 non-voting members, but we can imagine that frustration, demoralization, and basic alienation from the union at the chapter level must be ingredients in the explanation. While public education is facing an historic crisis, our union has thus far failed to involve the majority of members in a struggle to defend our rights and to improve our schools.


The participation results, listed by division, are shameful:

Is our union any different from other unions?  Probably not, except that our union allows retirees to vote and when you look at the new contract you can see that retirees are the winners.  An article, which I only partially agree with, identifies the lack of active member participation in elections and we teachers are no exception to this.

Presently, the two other caucuses, MORE and New Action, has failed to garner significant support and as for the E4E cult?  They are simply a fringe group and a front for anti-union corporate reformers, who didn't even bother to enter the elections for fear of exposing their lack of membership.  For our union to become more democratic, we need to have a new caucus that focuses on teacher justice and not social justice issues that dilutes the message and alienates a significant sector of the rank and file.

Its time that a new UFT caucus be formed from the disenfranchised membership, ATRs, untenured teachers, and mainstream educators who are unhappy with the union's leadership and lack of support.  Maybe the ICEUFT section of MORE can split and form its own caucus, as it did once before, and focus only on educator issues. Become a real trade unionist alternative caucus.   Only then will the UFT leadership take notice and maybe our union will become more democratic and transparent.  Until things change, its more of the same, a disconnected union leadership that cares more about their relationship with the City and DOE than for the membership.
Posted by Chaz at 6:23 PM

How about an ATR caucus? Mulgrew refuses to grant us chapters. So why not organize ourselves into a caucus, however that works?

You were an ordained member of Amy Arundell's ATR advisory group last term. What lesson did you learn from this ill-advised secret society that did NOTHING to advance our cause.

Amy and her trusty aide Mike Sill are just two more of Mulgrew's walking dead who scorn our pain. Am I wrong?

Thanks Chaz for your upfront article about our apathetic membership. We just had parent teacher conference tonight and I am exhausted. The membership accepted the previous pattern being put off for a total of 11 years and instead welcome 1% and 1% plus a 1,000 bonus. In addition we accept reduced due process rights of ATR teachers and more conferences. If I went to a showroom and bought a new car without any research and believed everything the salesman said people would think I am off my rocker. However this is how teachers voted on this contract and that's a shame.

Its our fault for failing to inform our co-workers about the blogs and groups that act for a real reform. How many uft members read your important blog?

If More or Ice want to seize power they should do so. If 25% approve and vote the UFT is disenfranchised. Perhaps that's the reason for the paranoia and oaths. Everyone complains, moans and groans. Everyone waits for someone else to do something. No one is doing anything. When your time comes (to be terminated) don't look for Mulgrew, Arundel, Sill or any UFT representative to save you. Rely on yourself, your contacts, and start saving for a good lawyer.

Its obvious that MORE is not the answer. Their meeting was like a leftist rally where everybody who didn't march in Al Sharpton's down with the police parade are racists.

I can just imagine what they think of you?

I like your idea of a mainstream, trade unionist party that focuses on teacher issues.

I have seen this 25 percent disenfranchise the union idea many times on various blogs. Can someone explain step by step how this is done like how to reduce the rate or get rid of COPE. That would be informative.

Hey Chaz
1. Something I am not clear about: How, and at what point, does a teacher who wins election as chapter chairman actualy get involved with the Unity Caucus? In other words, what's in it for this individual? A cushy job inside the union?
2. As to the subject of this post, the problem is that you have 20 people reading each others' blogs. You are just not getting to these uninformed, demoralized teachers who depend on these same chapter chairmen for info. Until you figure out a way to communicate effectively with this mass of teachers you are getting nowhere.

Luckily this is why we are creating this new caucus. Who is up for a trip to Florida to play golf with the retirees? I am.

"If we don't approve the contract, we go to the back of the line...." Therein lies the problem. Unions are supposed to argue and defend the interests of their members to the utmost. The "chicken little" routine used in order to scare some members into submission is contrary to what unions are supposed to be about. Why even bother having a union then...especially one that takes a good amount in dues every paycheck? Say what you will about Roger Toussaint and the results of the MTA strike ~ at least he had the cojones to lead a walkout some years ago.