Why The Richard Parlini Case Has Little To Do With Teacher Tenure. 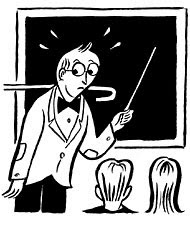 In a New York Post opinion piece, some of the parents that were outraged when they found out that teacher Richard Parlini was reinstated to his teaching position at P.S. 101Q in Forest Hills, despite accusations of corporal punishment, verbal abuse, and bullying, stated why they joined the lawsuit against teacher tenure.  According to the Daily News, Mr. Parlini made a deal with the DOE and paid a $2,500 fine and took a six hour course to make the charges go away.  He was then allowed to return to the school and was scheduled to teach the first grade until some of the parents complained to the press.  Due to the negative publicity, Mr. Parlini was hastily assigned by the DOE to administrative duties at the school until another position is found for him at a different school.  Some of these parents then joined the teacher tenure lawsuit, citing the Richard Parlini case as a reason why teacher tenure laws needs to be changed.  However, if one looks at the Richard Parlini case, it has little to do with teacher tenure but everything to do with the DOE deciding not to go forward with 3020-a charges and his Principal wanting the teacher back at the school.

First, if the DOE's Office of Legal Services really had a solid case against Mr. Parlini, they would have pursued 3020-a termination charges against him as they have done to too many others and let an independent arbitrator determine the "award" (penalty).  Second, the DOE may have realized that the accusations lacked credibility when they did the preliminary investigation.  Finally, its very obvious that the Principal of the school wanted him back, otherwise he would have been immediately assigned to the ATR pool since he agreed to a stipulation and paid a fine.  Is Mr. Parlini guilty of what he was accused of?  Who knows?  However, if the DOE believed they had real evidence, Mr. Parlini would have gone through a 3020-a termination hearing as many other teachers have done.

The fact that the DOE reached a settlement with Mr. Parlini had nothing to do with the teacher tenure issue but has everything to do with the credibility of the accusers and the Principal wanting him back into her school's classroom.  With or without tenure protections, the result would probably end up the same way since it was up to the DOE to initiate charges and decided not to.  Place the blame on where it really belongs, the DOE for sending Mr. Parlini back to his school and not the teacher tenure issue.
Posted by Chaz at 11:21 AM