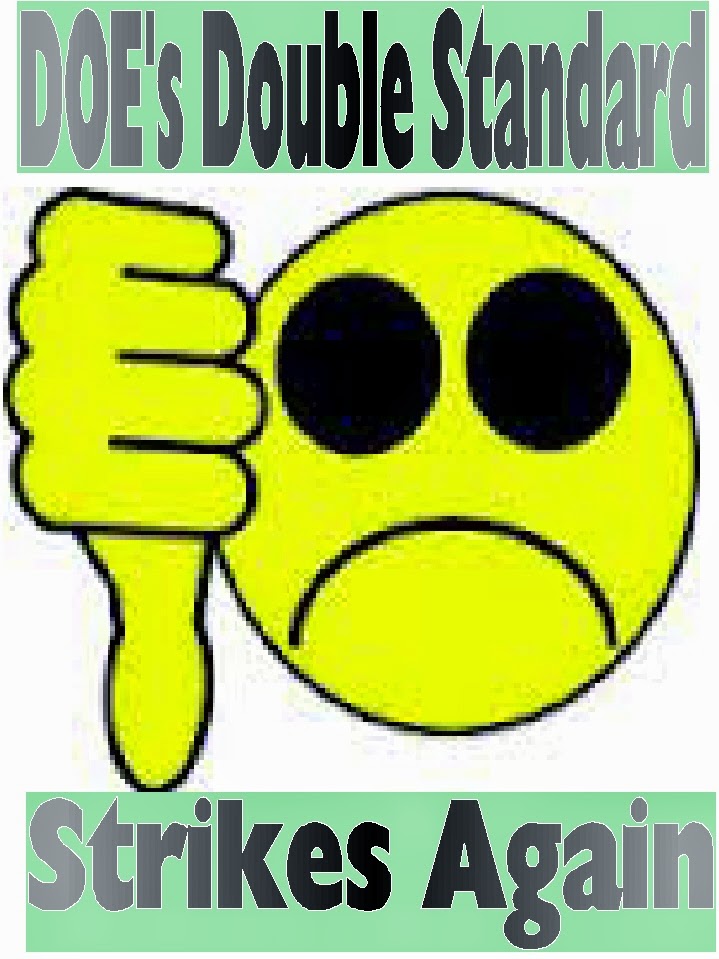 During the Bloomberg era the DOE repeatedly failed to discipline administrators and when they reluctantly did, they gave them a mere "slap on the wrist" for actions that would have led to termination if it was a staff member. With a change in the Mayor's Office and a more "progressive" and friendlier person at the helm, we all hoped his new Chancellor would "clean house" and change the tone at the DOE from a "gotcha mentality" to a more collaborative agency.  Even the UFT President, Michael Mulgrew, claimed he saw a new tone at Tweed and even hugged the new Chancellor.  However, nothing has changed, its still the same old DOE as the new Chancellor failed to "clean house" and retained many of the high and mid level architects of the destructive Bloomberg years.  Sure, there has been some changes at the top but most of them left because they were frustrated with the lack of focus and leadership from the Chancellor not because she wanted them out. Unfortunately, many of the people who remained are the implementers of the hostile Bloomberg policy and it shows in the just completed contract with the UFT that makes ATRs "second class citizens" and makes ATRs who won there discipline hearings an "untouchable".

One of the policies that appears to have not changed is the DOE "double standard" when disciplining administrators and staff members.   In many cases, administrators are either not disciplined or given a mere "slap on the wrist" for actions that would have led to the DOE to file 3020-a termination charges against a staff member.  The latest examples of this "double standard" is the Assistant Principal who changed 11 grades from failing to passing for his son at "Bread and Roses" High School.  His punishment?  He is now an ATR Assistant Principal, no 3020-a charges.  Another recent case is the Assistant Principal at Automotive High School who dismissed two teachers from scoring because they were too strict on his seniors who he was trying to graduate out of the school.and apparently, in violation of the intent of the City's and maybe State regulations re-scored them  His punishment?  None.  Finally there's the case of the Principal of Murry Bergtraum High School who abused the credit recovery program that pushed seniors out of the school without them appearing in class to get the undeserved credits to graduate. Rather than go for termination charges, the DOE made her a Principal at another school two years later.   All three cases can be found Here, Here, and Here.

Moreover, what happen to these two leadership academy principals in the Bronx who proved to be poor role models and parents demanded their removal?  They still are principals in their schools!  Here. and Here.  If it was a teacher the DOE would have not only removed the teacher from the school but would most certainly have filed 3020-a termination charges.

I guess nothing changes when it comes to the DOE "double standard".
Posted by Chaz at 4:37 PM

Of course those APs and principals aren't punished - they will eventually be rewarded. They have done what the DOE wants - graduated students, ignored vocal parents, and put those pesky teachers in their place. The only reason anything was done at all was because of media attention. When that dies down they'll become network leaders, principals, etc..

Farina knows double standards. Favoritism saved her career. She was twice probed—first by OSI and later by SCI--for the crime of covering up Regents cheating at the Cobble Hill School of American Studies.

And whom did Condon’s Deep Throat name? “SCI looked into a complaint that the cover-up extended to higher ranking officials including then Region 8 Superintendent Marcia Lyles, and then Deputy Chancellor for Teaching and Learning Carmen Farina.”

The double standards kicked in when both OSI and SCI treated her with velvet gloves. For example, OSI investigator Lou Scarcella—yes, that Lou Scarcella—did all his interviews alone. But when he climbed the ladder to Farina and Lyles, the rules changed: he was not allowed to question them without the censoring presence of OSI Deputy Director Tom Hyland in the room.

Athough Scarcella was able to expose Farina’s credibility-killing amnesia regarding what she knew and when she knew it, he says that ultimately he was blocked from substantiating her role in the cover-up.

SCI’s fix for Farina was far worse. Condon’s people did not squeeze her in the slightest, or if they did, kept it secret. Herewith the stingy two-sentence extent of her testimony according to Condon: “She answered all questions posed to her by SCI investigators. Farina’s testimony was consistent with the facts in the Scarcella report.”

That Farina is one lucky abuela. But her luck is running out. The cold Cobble Hill case is heating up at the Department of Investigation. (To be continued)

Those in power protect their own. Anyone who thought things with Farina were going to be different were foolish. Once in power, people will tend to keep the status quo in order to continue taking advantage of their position. Very few, if any, will commit to doing the right thing if it means losing that power. Farina is pensioned and making good money. She has nothing to lose by being different than her predecessors, and yet she chooses the company line. Disgusting.

There is also Jose Cruz, former assistant principal of Social Studies at Murry Bergtraum and current principal at Queens High School for Mathematics, Science and Technology. The Daily News ran an article on him a few years ago titled "Bully Principal" and there has been a massive staff exodus over time as well. Why is he still principal? Why would anyone think these people should be in control of any kind of school of knowledge? I have to imagine being a principal is a hard job, and yet these people abuse their staff and students and the DOE just turns a blind eye. No wonder Charter Schools do so well, how can they not?

Hello my fellow educators:
As an ATR social worker I was assigned to a school in the bronx. The school has a social worker and a guidance counselor who sit in the main office at small little desks. You mean to tell me that principals do not read what First lady Michelle Obama has to say??
But most of all, I want to recognize all of you for everything you do for our young people every single day. And I have to tell you, when I found out that you all were making me an honorary school counselor, my first thought was, there is absolutely no way I’m worthy of this honor. Because I know that you all have one of the hardest, most stressful, most important and most underappreciated jobs of anyone in this country -- and I live with the President of the United States. (Applause.) So frankly, when I think about what you all do on an average day, well, quite frankly, I’m amazed.

An average day for all of you might start with a child sobbing in your office because she’s being bullied or having trouble at home. Or maybe it’s the kid who’s been kicked out of every class, and he’s sitting in front of you, angry and defiant, and it’s up to you to figure out how to help him get back on track.

And then, later on in the day, perhaps you meet with an overwhelmed parent who’s not sure that they can really trust you, so you’ve got to convince them that you’re there to help and that you’re on their side. And then maybe you see that kid with so much promise but who doesn’t think she’s college material and refuses to apply to any schools because she doesn’t know how she’s going to pay for school, so you’ve got to somehow show her that she has what it takes to succeed in life.

And those are just a few ways that you support our young people every day. Too often, you are the only adults in their lives who aren’t there to grade them or judge them or punish them, and that’s why they seek you out when they have nowhere else to turn.

Yeah and principals claim that they are students first!!! What a joke. Same thing at my school here in Queens. Guidance Counselor and social worker have a small closet space to share with one desk in it - pathetic -did anyone say students first??

Word is out that lots of ATRs are going to placed in order to start the termination process. No matter what you do or don't you'll be written up and thrown back into the pool. Second time, 1 day termination hearing. The worse you do on the interview the more likely you'll be placed in that position. Don't purposely screw it up. If you ace the interview, you won't be placed (because it'll make it more difficult to show unprofessional behavior). All this with the UFTs approval.

You really don't know what your talking about.

As for the termination process? Its not a one day termination. you must wait in line like all the others before an arbitrator hears your case. That can take a year or more.

I didn't say a one day termination, I said a one day hearing.

You're still wrong about the interviews and the DOE still has to prove their case in the one day hearing not the ATR.

Be aware mandated interviews start 9/15. If you don't show up you're terminated. Two incidents of undefined unprofessional behavior and your headed for a hearing. How does the ATR prove the negative for an undefined term? I am not wrong about anything I've written.