Are Our Pensions Safe? 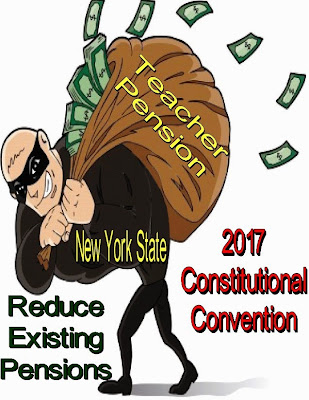 There are rumors that Governor Cuomo will go after existing teacher pensions in 2017 by calling a constitutional convention and changing the State constitution to reduce pension benefits.  However, there is a question whether he could do it and a problem if the Governor actually intends to do this since its highly likely that existing pension benefits will remain unscathed no matter what happens.

First, the New York State constitution states that "benefits cannot be diminished or impaired" and even if a constitutional convention tried to change that clause, the unions would tie it up in the State and Federal courts for a decade or more and the likely result would be no changes for existing pensions or workers hired under the old State constitution.

Second, its highly unlikely that the Democratic Assembly would agree to do this and face the wrath of the unions which would jeopardize their elections going forward.  Yes, they caved to the Governor on the teacher evaluation system because our disconnected union leadership allowed it.  This would be very different since it destroys a covenant between the the State and its public workers and the entire unionized work force would mobilize against it.

Finally, the Illinois Supreme Court has unanimously struck down that State's revised pension system that tried to diminish existing pension rights and also questioned the futility of having a constitutional convention that would allow it to do so.  This will be cited as precedent in any New York State attempts to do the same thing.

The bottom line is that all this may be moot as the Governor's popularity is rapidly sinking and picking a fight with the state unions would not be in his best interest.  In other words, I don't believe that our pensions will be affected, no matter what happens in 2017.
Posted by Chaz at 9:02 AM

My understanding is that the voters of NY would have to agree to hold a constitutional convention via a referendum. Is this true?

In Cuomo's original version of his pro-charter school commericals, he had a line (uttered by a student, noless) claiming "it's not about the pensions" In the current verison of the commerical it has been dropped and replaced by "it's not about the lobbyists? Do you know the reason(s) for this modification?

Re your second and third points; changes have already been made that were worded in such a way that effected teacher unions only. It can be done agin.
When our TDA fixed interest rate was reduced from 8.25% to 7%, the chane was made for "UFT members" only. The other unions in the TDA were unaffected and (re your third point), the CSA had absolutely no problem with the change made, as it did not effect their members in the TDA. During the recent recession, private construction unions had absolutely no problem with the attacks on teachers unions, as those attacks in no way effected their members making the higher wage on public PLAs under current state law. They were cool with it (and even rooted against us). Mulgrew had absolutely no problem giving the city the authority to have all city workers pay into our insurance whenever it chooses either. He did this last May. Only one city union held out against this and all the rest lined up against it.

So unions can easily be carved away from other unions. The question is how the teachers unions could be carved away while still protecting other unions and the answer is with legislative wording.
This is why I'm hoping your final point will prevail.

While I think you analysis is sound, there is a wild card: in the event of a severe financial crisis, cities undergoing bankruptcy proceedings - something NYC has come close to in the past - can, under federal law, sidestep those state constitutional provisions, as recently happened in Detroit. There, pensioners benefits were reduced, despite protection sin the state constitution.

While that might seem like a remote outcopme to us here in the city, it could be more realistic upstate.

Yes, but voters usually vote for one.

The TDA reduction was a give and take with Randi Weingraten who gave us back the two days before Labor Day. Without our union's approval it does not happen.

Even in bankrupt Detroit, the givebacks for existing pensioners were small and our State and City are in a different category with a State and City budget surplus and no financial crisis on the horizon.

What does he say about 18 year olds with 10 credits who assault teachers. What about ALL students running around using cell phones to make calls, text, listen to music, watch porn, and the supervisors dont even put these things into OORS. Sounds like fraud on the highest level. What about students who are in the halls cutting all day and then being given attendance awards. What about students who noshow all year and then are given credit recovery or makeups in every class, which amounts to no work, and passing grades...I can keep going if people need more examples. Oh, it must be the ATRs fault, or because im not using Danielson properly.

How about the use of affect when appropriate as opposed to effect. While I'm at it how about using lose instead of loose.
Example: Mulgrew is affected by a limited intelligence which has a negative effect on union members.
The UFT tends to lose our hard won rights because he has a loose sphincter otherwise known as his oral orifice. Unfortunately there isn't much difference because shit flows out of both holes.
People in UFT headquarters wear brown lipstick.
Sincerely.
Angry Nog
Ps kiss your pension goodbye. It's going to be a can collecting retirement.

Lets see if I got it right. Andrew Cuomo can only change our pensions if the UFT delegate assembly agree to it?

What about retirees? Would they be affected?

ATR in a lousy school in Brooklyn. They actually have students names posted on the wall with how many "credit recovery" classes they are taking. Some students literally are making up 5-6 classes at the same time plus whatever classes they are currently taking. I guess thats why schools that have a college readiness rate of 5% have a graduation rate of 60%. Come in and ask them to right a paragraph at 19 years old, cant do it in any decent manner. And of course no discipline of any kind...all the same.

I think you read the article incorrectly. Our UFT delegate assembly has nothing to do with the constitutional convention.

And the point is the CSA had no problem with two-tier TDA ...as long as their tier was unaffected. That's NYC's public labor unions for you.

The pensions were guaranteed in the state constitution because the stock market crash of 1929 wiped out the pension funds leaving many retirees with no pension.
Changes to the pension laws not only affect public servants but also the crooks in Albany. I doubt many would go on the "change the constitution" bandwagon.
Giuliani repeatedly called for a constitutional convention - he wanted to get his hands on the TRS money. He got nowhere (because he was so well loved.)
I think the governor's star is receding - especially when he said that the tests given in the spring don't count!
People need to remember that the pension is controlled by the TRS board-4 of the seven members are elected by the UFT. The mayor and governor have no direct control over the pension system.
Retirees get their pension from TRS not the city.

Japan just agreed to negative interest rates which means you pay the bank to hold your money. The news says that the US treasury is considering this move. If that be the case, since they lowered our interest in out TDAs at last meeting, can our interest rates be significantly reduced. What do you think?

Hey Chaz,
Just wondering your thoughts on this recent story about almost half a billion dollar of the pension fund going to affordable housing. I mean what could go wrong? I mean investing in mortgages was a great idea in like 2008-2009. Anyways here is the article, I'd love for you to share your thoughts: https://comptroller.nyc.gov/newsroom/press-releases/comptroller-stringer-nyc-pension-funds-announce-450-million-investment-in-affordable-housing/