When It Comes To Credit Recovery, It's Still The Same Old DOE. 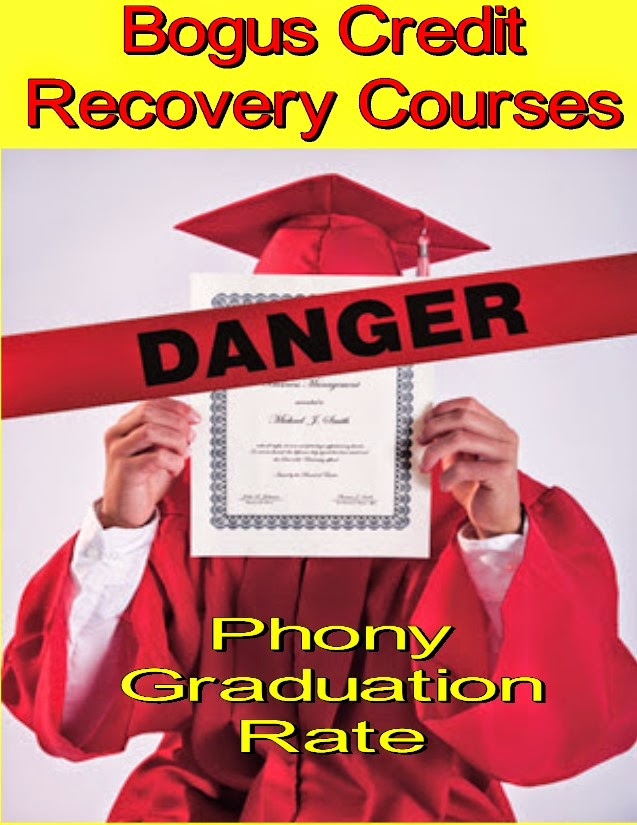 I have been following the disgusting "credit recovery"  saga at John Dewey High School in Brooklyn where another terrible "Leadership Academy Principal" , Kathleen Elvin, has been abusing her authority and has a bogus graduation rate.  Despite an OSI investigation that has been completed,  the DOE has done nothing about disciplining the school's administration. The school came on the radar after the New York Post wrote an article questioning the significantly higher graduation rate at the school.

Now it turns out that the Principal and her administration has been graduating students who didn't even bother to go to class and violated the "credit recovery" requirements that the State and City agreed on back in 2012.  A prime example was "student King"  (not his real name) who Juan Gonzales of the Daily News wrote about in his article.  The student, who apparently never went to many of his classes was allowed to graduate by taking massive amount of "credit recovery" online courses, all at the same time!   This violated the State and City "credit recovery" requirements that limited students to only three credit recovery courses in the core subjects during their high school career. What did the Principal do that violated the "credit recovery" rules?  Let me count the ways that "student King" was allowed to graduate without showing that he obtained adequate academic skills.

Despite an OSI investigation that was completed last school year, the DOE and the disappointing Chancellor, Carmen Farina, has taken no action and remains silent on the apparent abuse of the ":credit recovery" rules.  This  brings into question the graduation rate of the school and the methods used by the Principal and her administrators to increase the phoney graduation rate of the school. Worse, despite the end of the Bloomberg era, when it comes to DOE policy making, its still the same old DOE, complete with their "double standard".

Here is what one student thinks of Principal Kathleen Elvin on Ratemyteacher.com.

I ATR-ed at Dewey for six weeks last term and heard nothing but disgust from teachers for Principal Elvin. Why hasn't Farina removed her? Because they are sisters in crime. Farina illegally covered up Regents cheating at the Cobble Hill School of American Studies when she was Region 8 Superintendent.

A confidential informant told SCI that she was involved in "a high level cover-up" and an OSI investigator swore that she lied to him. Nevertheless SCI exonerated her without disclosing a word from her perjured testimony in their corrupt report.

Grace Zwillenberg, old science AP at Adams was the Queen of this ponzi scheme....I was there for quite a no. of years in the science dpt. What happened to that skank? She was promoted to principal, then again promoted to the Sups office. That pig fell asleep during my observation and gave me a U!

I have students taking the Aprx online courses. We were told just pass the little bastards if they hand anything in. The chapters are scored "out of 20 points" or "out of 25 points" etc. I give the bastards 17, 18 etc. Whatever. It's all a fake system. Nothing really matters.

Zwillenberg was indeed a pig. A coarse, vulgar pig who frequently made sexually salacious remarks. Instead of breaking up a pair of philandering teachers in the science department, she actually put them together in a plum program. I think she lived vicariously on their daily double lunch period jaunts to a nearby hotel. She was investigated by SCI for pursuing men during the working day on her school computer. A "Principal From Hell" article scheduled to be printed in the teacher newspaper organ of the UFT was quashed by her good buddy Rona Freiser of the UFT. She graduated from being a science AP who was the laughingstock of the department to the principal of the school, which then went into a decline under her "leadership". When pushed from her principal's slot, she got herself a nice position in a network, whereas a TEACHER would have been terminated.

Blow the whistle, please. Name your school. But you are guilty, too, for just following orders, as you put it, to "pass the little bastards." When you call SCI as a mandated corruption reporter, you should ask for immunity. But you may not get it.
This way SCI doesn't have to bother to inquire and everybody's happy, especially Farina.

Philip, unfortunately I will never eat out my pathetic school. I love it here. Everything is done under the table, no rules. Apex is the funniest program I've seen yet. The kids write whatever they want, half ass it. I sit there for hours getting "per session" and no kids ever come. I am creaming in per session. The kids get credits for entire classes without ever stepping in a room. I've never ever ever seen anything like it. In my home district we all freakin laugh.

These comments about Grace Zwillenberg, Science AP at Adams HS in Queens bring back memories...

I was there for quite a while, and remember that nasty bitch.....I would hear her 5'6" frame, and 300lb. body struggling down the halls towards my classroom, echoing off the depression era plaster walls. The sound of her ample thighs draped in WWII industrial grade nylon stockings swooooshing against one another makes me break out into a nauseous sweat to this day. SWOOSH, SWOOSH! SWOOSH! Click-clack-click-clack...

Grace Zwillenberg, you are not forgotten!

Stop beating up on Grace Zwillenberg, and give credit where credit is deserved!

You know, for the porker she was, she really didn't sweat that much.


The NYC school system is filled with these bloomberg people and we must desperately try to get these people out of the system. Bloomberg hired the worst fuc ups you can find?? He truly wanted to make the lives of educators miserable and he succeeded with these "leadership" academy principals who have turned out to be people from hell