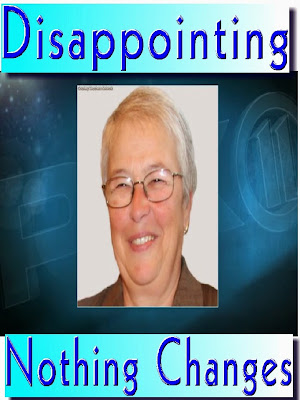 As we approach the end of another school year, let's look at what real changes Chancellor Carmen Farina has implemented in her second year as head of the New York City public schools.  First, let's look at the few positives.

Elimination of the useless money-sucking "Children First Networks".  This was a no-brainer since this was the Frankenstein creation of Eric Nadelstern who replaced Carmen Farina in the Joel Klein Administration as she was forced to resign as Deputy Chancellor.

Changing the experience criteria of the applicants to the infamous "Leadership Academy" from three years in education to seven and at least five years as a classroom teacher.

Anti-Charter and leveling the playing field for all schools by no longer exempting the small high schools created under Bloomberg/Klein  from accepting "high needs students" and artificially raise up their statistics.

Unfortunately, for the parents, students, and teachers of the New York City public schools Chancllor Carmen Farina has far too many negatives.  Here are the major ones.

Failure to reduce class sizes as promised by Mayor Bill de Blasio during his campaign.  New York City public schools have the largest class sizes in the State and have actually increased under Chancellor Carmen Farina. 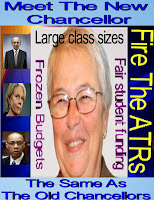 Froze already tight school budgets despite an economic revival that gave DOE a record amount of money to the agency.

Continuation of the destructive "fair student funding" formula that shortchanges schools, created the ATR crisis, and forced principals to hire the "cheapest and not the best teachers" for their schools.

Kept many of the Bloomberg/Klein appointees in policy making positions that translated in the continuation of the policies that make the classroom a hostile environment.

Ill-advised elimination of the cell phone ban and a loosening of the student discipline code that has resulted in a more disruptive classroom.

Failure to remove incompetent and vindictive principals and allowed the "double standard" to continue.  Worse, she has failed to remove many of the 400 "Leadership Academy" principals that she stated should not be principals of their schools.

Finally, her solution to the ATR crisis was no solution at all.  In fact, it made the ATR a second class citizen with reduce "due process" rights and may actually increase the ATR pool over time. In fact, she is no friend of teachers at all.

The Chancellor is a huge disappointment and I don't see much improvement until she retires for good and leaves the New York City schools to a competent Chancellor.
Posted by Chaz at 10:54 AM

Basically, any policies that are harassing, belittling, and create an even more difficult work environment were either left in place, augmented, or initiated. It's as clear as the nose on her face.

You're disappointed by Farina? What about me? I begged her to fire me at the April 29 PEP meeting, but she just can't quit me. Here's an excerpt from my two minute ambush:

"I come here tonight to implore you to terminate me for conduct unbecoming a teacher. Why would you do that? Because I have accused you of participating in a high level cover-up of my Regents cheating allegations at Cobble Hill and then lying about your role to both OSI and SCI.

"The evidence of your shameful official misconduct is detailed my j’accuse titled “The Carmen Farina Nobody Knows,” which I sent to you for comment a year ago. [see scribd.com or nycrubberroomreporter.blogspot.com] Showing consciousness of guilt, you have not responded.

"Nor will you ever seek to terminate me because you could not survive discovery or my cross-examination at the hearing. Better for you to cling to SCI’s corrupt exoneration which, among many forensic lapses, failed to quote your perjurious interview.

"Final point: SCI inexplicably avoided examining the disputed Regents exams for signs of tampering that I and five eyewitnesses confirmed. But you could destroy my credibility by commissioning an audit that could possibly prove that I fabricated the whole story. But you wouldn’t dare do that either … because, if I may say so, you are the Beverly Hall of the DOE and New York is the Atlanta of the North."

Anything goes as I escalate my exposé of the Chancellor's dark side with heretofore deaf, dumb and blind city and state officials, and press Randi to go public with her private endorsement of my wipe out of SCI's whitewash signed by the elusive Special Commissioner of Investigation Richard Condon, he who dodges an audit that would lead to his and Farina's disgrace.

Negative #8, she actually kept 4 groups and named them Affinity groups which is the complete opposite of what she tried to do by dumping the CFN's. Why keep Affinity groups with their own superintendents being placed this September? What's the point? The biggest get overs and useless kinieving bastards are the disgraceful New Visions Network with its 2 faced CEO, Robert Hughes.

Sent to Mulgrew, Amy, etc...While it's nice to tell us to contact a school rep, district rep, or borough office. I find them with no competence most of the time, and/or unwilling to help the rest of the time.

1-I witnessed a principal threaten to fire an untenured teacher because the lesson plan wasn't up to what the principal desired. I wont quote the contract, but the teacher can have any lesson plan he/she wants. The UFT rep was made fully aware of the situation and will do nothing about it. The school rep job has become a job that somebody takes for a parking space, a period off, or to move up a ladder. The person often has no desire to cause any friction, and allows teachers to be run over by administration. You really need to find a way that shows that people who are paid by money or time, are actually doing the job they are paid to do.

2-I had a pension consultation, you know, where I speak to an expert from the UFT. I thought I knew what I was talking about, but was told very different things by the rep. Of course, after researching the info, I found out that I was given incorrect info by the expert. These are critical mistakes, and one is planning the rest of their life based on what is said at these meetings...

3-When I visit the borough office, I usually get someone who either has to ask someone else, doesn't know the answer, or answers me incorrectly. These people are being paid a second salary to do this. Seems like it's free money to do a job incorrectly. Even if I bring something in, stated in writing, I get the dumb look and the I don't know answer.

4. I witness an ATR, here for the last month, still without a bathroom key, now being told to pay for it herself. In addition, after told to cover 6 classes, without coverage pay, answer was that only applies to teachers, you aren't a teacher, you are an ATR.

5. What is the punishment if a school doesn't enforce the discipline code at all, and nothing is reported? Seems unfair teachers have to get tortured by unruly students all year, then principals get bonuses because the school has no reported incidents.

To be honest, I fear being targeted, this stuff is going on all over the city, never changes, never stops. I hear all the time, people complain, they get targeted, get rated poorly, 3020 charges, etc. I don't think all of you know how bad it is to work in a "difficult" school. All day, nothing but curses, threats, I could go into detail about what is said by these students, but I will try to remain professional. You have students, hundreds or thousands in a building, borderline illiterate, who have criminal records miles long, who expect everything on a silver platter or else. No responsibility, no effort, come and go as they please, no notebook, no pencil, but have hundreds of dollars of clothing on their body, with $600 cell phones, BEING USED ALL DAY IN THE BUILDING, I think that's a violation of the discipline code, right? And then pass me or else. And then "credit recovery" or let them write an extra credit paper, which is plagiarized, or let them take the class online. Huh? For no showing all year? A grade of 65 with 70+ absences next to their name? Who checks on this? This is the epitome of fraud. I can go on and on for hours, but why bother?

Agree with BJ, nobody knows what's really going on in most schools. We are in a sad state of affairs. Everybody thinks these students are actually going to schools to get an education? Sadly mistaken. I witness, every day, students openly standing in the hall having cell phone conversations, and that's just the start, cutting class all day. going to the gym, 4 periods per day, etc. Not an ounce of work done by students in these schools. When will the UFT intervene? When will the discipline code be respected? Of course we know principals hide these violations, looks like these schools are utopias on paper. Not to mention how dangerous the neighborhoods these schools are in. Or how about in the school when everything is blood or crip or you have to hear about shootings and stabbings, when you, as a teacher, can be a victim at any time. 20 year olds reading on a 3rd grade level, and cutting class all day, and then being given passing grades because "We cant fail everybody." How sad.

We lost all type of standards lately. Abusive Principals and dishonest are still in power. The people in charge in these schools are the best, they are all corrupt, and the UFT does nothing. These Leadership Principals have pushed and discriminated too many experienced professionals out.

To BJ--do the city a favor by naming your "difficult" school.

Since you guys got the ball rolling, does anybody actually look at report cards and see students with 20-30 absences per marking period, 50 plus absences per term passing classes? I see it all the time, Its a joke, and teachers still do it. Why isnt the chancellor saying this is unacceptable? What happened to Walcott saying a student needed to be there 2/3 of the time just to be eligible for credit recovery? Im tired of a principal say, well the student hasnt been here all year, but she's a senior, lets find a way to pass her. And they wonder why unemployment is so high for people without college degrees, and they wonder why our students cant find decent jobs and resort to crime. Where is the accountability? WHere is the media?

Leadership Principals like Dwarka, Kwait or Cruz got hired to discriminate, harass and bully teachers.

It would be nice if the age discrimination policies like the fair student act, and the targeting of veteran teachers by the Leadership Principals would stop.

Why are abusive Leadership Principals are being protected? They are destroying schools that were performing well.

Fariña does not seem to know that we are going in the wrong direction.