While Our Disconnected Union Leadership Supports The De Blasio Administration, The Teachers Continued To Get Screwed! 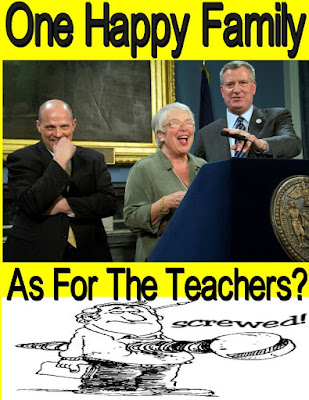 It wasn't too long ago that our union President, Michael (don't call me Mikey) Mulgrew, claimed that we have a supportive ally in the Mayor and a new tone at the DOE.  His embrace of the new Chancellor, Carmen Farina, was to show the new spirit of cooperation between the union and Tweed.  While on the surface, there seemed to be a era of cooperation, the fact is that cooperation does not trickle down to the schools or classroom where the Bloomberg "gotcha system" is still going strong.  If there really was a new era of cooperation between the union and the DOE wouldn't these issues disappear?

Large Class Sizes:  Despite promises to reduce class size, the Mayor and Chancellor failed to lower class sizes and despite campaign promises, refused to develop a plan to implement the lowering of class sizes.

Double Standard in Disciplining Administrators:  The failure to remove many of the so-called 400 principals that Chancellor Carmen Farina claimed should not be in charge of schools are still there and she and her Bloomberg era holdovers continue to protect them. Examples can be found in my "bad principals"  articles.  Here are the articles dealing with the "double standard" that has not changed with the new administration.

ATR Crisis:  The holdover of the ideological Bloomberg era policy of the ATRs that drains $160 million dollars from the DOE budget annually and the failure to use experienced educators in the classroom is an educational crime. In fact, under the new contract ATRs are second class citizens.

Failure To Reduce The Bloated DOE Bureaucracy: The data accountability and legal departments at Tweed were supposed to have been reduced but thanks to the Chancellor's failure to "clean house" these departments continue to expand and thrive, like a cancerous tumor.

Frozen School Budgets:  Despite the City's economic viability and a $5.9 billion dollar surplus and more funding to the DOE, the Mayor and Chancellor kept school budgets frozen at 2012 levels.  Unbelievable but true.

Failure To Reduce Paperwork:  Despite assurance from both the UFT President and Chancellor, there has been little reduction in paperwork requirements imposed by the Bloomberg Administration.

Its no secret that our union negotiated a vastly inferior contract just to curry favor with the new administration and while Michael Mulgrew , Carmen Farina, and Bill de Blasio yuk it up, the teachers continued to get screwed.

nothing personal, but don't you guys realize that the union and the city policymakers do not care that the system sucks? it's babysitting and they're all fine with it. we will all get paid and on goes this awful system.

my motto: do the bare minimum, hide, kiss a little butt and stay as invisible as possible and enjoy the time off b/c the job blows!

Some of us want to fight for what is right so that people like you and I don't have to kiss butt and hide. Nothing personal, there are just some people that come into this profession because we care about people (usually means our students, but sometimes other humans too). So, we like to fight against injustice to people. Trying to make sure that they stop trying to ruin people's lives.