Renewal Superintendent Amiee Horowitz Knows Nothing, See's Nothing, And Does Nothing When It Comes To Academic Fraud. 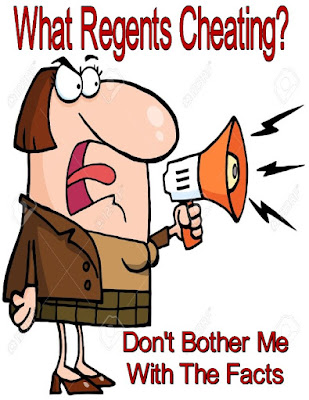 Here we go again, another renewal school was found to have committed academic fraud.  This time its the embattled Flushing High School that has had an astounding 5 principals in five years!  Here are just two of them, Here and Here.  Yes, the very same Flushing High School that I wrote about previously. The school is surrounded by an East Asian neighborhood, yet few of their children go to Flushing High School, thanks to school choice and the school's terrible reputation.  The school must take hundreds of over-the-counter students who roam the school's hallways and disrupt real learning just to meet their enrollment goals.

The New York Post was able to obtain an email from the Guidance AP at Flushing High School that is a "smoking gun" which shows the academic fraud the school went to artificially raise their graduation rate.  According to the New York Post the AP of Guidance, Patricia Cuti stated the following:

“Our benchmark of a 60 percent graduation rate in June is non-negotiable,” wrote Patricia Cuti, assistant principal for guidance. “Summer graduation is NOT an option.”

According to the New York Post article the school was enrolling 150 students in a quickie online course while they continuied to fail the very same courses they were currently taking which is against the State and City "credit recovery" rules.   More importantly, the email cc'd Cyndi Kerr, the Queens Deputy Renewal Superintendent and this is the first direct evidence that the inner circle of Renewal Superintendent Amiee Horowitz was directly notified of the graduation quota and the academic fraud being used to achieve the graduation quota.

In my opinion  Renewal Superintendent Amiee Horowitz knows nothing, when it comes to cheating,  see's nothing when evidence of academic fraud is presented to her,  and does nothing, except to go after staff, when action needs to be taken to eliminate the practice.

I'm a teacher that was just recently discontinued and was fortunate to get a good paying job at a charter school. While I don't see the charter job as a long term venture at least it's something and I see it as temporary vehicle to escape the madness of the DOE and education in general.

I've been reading many many different stories over and over again on your blog Chaz, and if more people knew the facts I'd been willing to wage any amount of money that there would be more applicants on line eager to work in an asbestos factory over becoming a teacher.

I sincerely wish I had not gone into teaching. Don't get me wrong...the "concept" of teaching is something that I am extrodinarily passionate about. I love the prospect of being able to actually educate kids.

For me personally the most demoralizing aspect is not the abuse that we have to endore form the students, the scores of students behind grade level, the abusive administrators, corruption in the school, being constantly brandished as a scapegoat , being expected to magically correct all of societies ills..........all of those dwarf in comparison to the real problem at least as I see it.

I cannot say that I am proud at all to have worked for or having represented the DOE. I always wanted to be part of an organization that I can say that I was proud to have worked for that would produce successful people, and have an invested interest in it's members. Instead I just can't see much difference between myself and a sweat shop worker. While there was an obvious discrepancy in wages, and working conditions, in both cases we were thought of as invisible and disposable.

"... when it comes to cheating, see's nothing when evidence of academic fraud is presented to her, and does nothing ..."

Your words also fit Farina who was involved in a high level cover-up of cheating when she was Superintendent in Brooklyn in 2002-2004. Sol stern was too kind in Sunday's Post when he wrote: "a Regents cheating scandal erupted right under her nose at the Cobble Hill High School for American Studies." Were I Sol's editor I would have suggested scraping "right under her nose" and inserted instead "with her full knowledge and participation."

Ponder the DOE's current predicament: with its institutional integrity at stake owing to long-delayed exposures of grade-fixing, a chancellor with dirty hands is in charge of the clean-up.

But there may be light at the end of the tunnel. Today I was arraigned in NJ's Marlboro Township Municipal Court for the crime of harassment (in the 4th degree) regarding a June 3 letter to my old Cobble Hill Assistant Principal, the ringleader of the cheating. I pled not guilty and thus forced a future hearing and, if there is a God, a trial. How does this sideshow relate to Farina? With a trial comes discovery and ultimately access to her secret SCI testimony on Cobble Hill that led to her corrupt exoneration. Of course, if Farina were a straight shooter, she would release the testimony herself.

Lehman HS dumped it's principal, Rose LoBianco because it's a renewal school and LoBianco was cooking the books too. Horowitz had LoBianco removed to avoid the next blowup in the Post. Lehman graduated a slew of kids under credit recovery. All the AP's at Lehman were removed too. It's going to get very very ugly Chaz. Wait to you see Lehman in the Post. LoBianco graduated hundreds of kids that didn't deserve it.

My best friend worked at a renewal school last year. In June she was discontinued after being denied tenure, even though she was rated highly effective. Other effective teachers in the school were also denied tenure and/or discontinued. Without writing all the details here, my friend made it clear to me that all the decisions came directly from Superintendent Horowitz. She also said that the Superintendent never observed any of these teachers in person.

Since the above occurred, all of the young untenured teachers who were not discontinued left the school and found other jobs. Like my friend, they were passionate, motivated teachers who the kids loved. Next year, the majority of classes in this school will be taught by inexperienced teachers who the kids will automatically reject because they are hurt and frustrated. Virtually all of the junior and seniors will lose their advisory teacher--teachers whom they build trusted relationships with over years.

Horowitz has no interested in fixing these schools. In fact, from what I have observed (I have friends in other renewal schools), she actually is better at destroying these schools than improving them. She is driving many good teachers away from the profession.

The Post is beginning to catch on and has published many articles about her recently. This blog also does a great job posting article as well. It's time this woman is held accountable for her actions, as she demands from all under her watch.

Solidarity UFT has been organizing a rally in front of Horowitz's office at 715 Ocean Terrace, Staten island, to be held at 2 pm on Aug 26, 2015; a big crowd would insure media attention, and media attention seems like the ONLY way to "flush out the vermin" running the System- evidence being shown through- of all places!- The NY Post's continuing coverage of the grade-fixing scandal in NYC schools. Having "experienced" Aimee Horowitz directly while a teacher and a CL at John Dewey HS, where, again, thanks to media exposure the horrible principal Kathleen Elvin has been finally publically shamed and fired, I can attest to Horowitz's "modus operandi" being one in which she ONLY backs fellow admins, and at the same time smugly and nastily dismisses the very humanity of teachers; she has a very low opinion of students too, especially if they are black or brown. I had to sit through a "sham" conference on the question of Elvin's right to become the school's "official" principal, and it was like a "Rubber Stamping Party" with her at the helm. A joke. I am really sickened by her "meteoric" rise from Social Studies A.P. at ER Murrow HS, to the "Czarina" of Renewal Schools- it makes me see DeBlasio's choices of appointees as governed by favoritism/quid-pro-quo/opportunism, anything but merit. And the Quid Pro Quo applies to his choice of Chancellor if you ask me!

Where's Edelman's story on Lehman HS in the Bronx? Whoa I'm hearing the craziest things about what happened there before The principal got the axe.