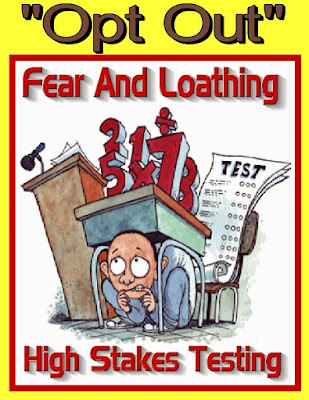 A survey by PDK/Gallup has shown that 64% of public school parents oppose using high stakes tests to determine teacher evaluation.   This survey should put to rest the education deformer claim that parents support these Common Core based high-stakes tests to determine teacher effectiveness.  In fact, the same poll found that 54% of those polled oppose the Common Core State Standards while only 25% supported using them.  This came as no surprise to critics of the education deformer led education agenda.  For example, Josha P. Starr, who under pressure from Obama and Duncan, was not selected as Chancellor of the New York City schools said the following:

“Too many kids in too many schools are bored,” said Joshua P. Starr, a former superintendent of Montgomery County Public Schools in Maryland who is now chief executive of PDK International, a network of education professionals. “Parents maybe see that and they want their kids to be engaged in schools.”

That's right, as I have been writing about previously, the constant test preparation is not real learning and many students fear and loathe taking these high-stakes Common Core tests.  Students should be excited about learning not passing a test that, for many is too long, hard, and are not grade appropriate.  Moreover, the results are not known for months and used not to determine the students placement (it shouldn't) but is used as a weapon against teachers, especially teachers who teach "high needs" students like English Language Learners, Special Education, or behaviorally challenged students. Nationally 47% of parents would "opt out" their child from these "high-stakes" tests if they felt them inappropriate for their child or used inappropriately, compared to 40% who wouldn't.

Maybe this study will convince the many Presidential candidates like Jeb Bush, Hillary Clinton, and the many others who drink the education deformer kool-ade that Common Core based high-stakes testing is the best teacher accountability tool for evaluating teachers but instead it only hurts the students and does not improve education.
Posted by Chaz at 8:55 AM

Ed-deforrmers do not care one bit about surveys.

"We care what parents think". -(Said no ed-deformer ever)