Chancellor Carmen Farina's Failure To Clean House At The DOE Has Resulted In The Problems She Now Owns. 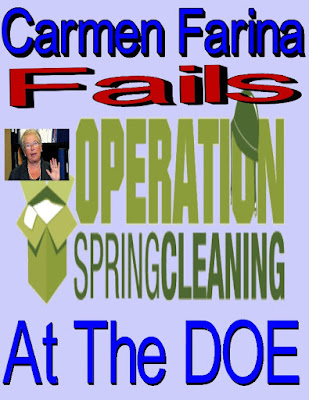 When Carmen Farina was appointed Chancellor of the New York City public schools, I and many others thought she would "clean  house" at the DOE.  Yes she did replace some of the top level Klein appointees.  However, she bulk of the Bloomberg era policymakers were left in place and continued the destructive Bloomberg policies.  Many of the De Blasio and Farina apologists, like UFT President Michael Mulgrew, cautioned patience and that things will improve in Farina's second year as Chancellor.  However, as we await the Chancellor's third school year we found little has actually changed.

First, she kept the already tight school budgets frozen at 2012 levels, which is a 14% reduction from 2007 levels.  Despite the economic recovery and a $5.9 billion dollar surplus by the City and more money allocated to the DOE, the extra funds did not go to the schools or the classrooms. It must be noted that Carmen Farina bought into the Bloomberg/Klein philosophy in the early years and was forced to retire as she was passed over as Eric Nadelstern became the Deputy Chancellor by Joel Klein.

Second, class sizes are as large as ever and have not been reduced as promised by Mayor Bill de Blasio.  Too many teachers are teaching a sixth period or out of license. in the secondary schools, to save on teacher salaries, a hallmark of the Bloomberg era.

Third, the Joel Klein inspired and destructive "fair student funding" that has caused principals to "hire the cheapest and not the best teachers for their schools".  This has resulted in the students being guinea pigs for "newbie teachers" who have no classroom experience, and no classroom management skills, and suffer from a steep learning curve that hurts the students they are instructing.

Fourth, the ATR crisis continues unabated as highly experienced teachers are regulated to be glorified babysitters,  thanks to our union leadership, along with reduced "due process rights".

Fifth, the corrupt investigations and 3020-a charges remain the same under Farina.

Finally, the continuation of the phony "credit recovery" programs known as "easy pass", made credit accumulation a joke nationally and resulted in bogus graduation statistics.

The fact is that Chancellor Carmen Farina is really part of the problem and is not the solution as she refused to remove Bloomberg era policies and the people implementing them from power.  As a result she know is responsible for the headaches she is saddled with, thanks to her failure to clean house! Please read Leonie Haimson's article as well.
Posted by Chaz at 2:50 PM

Let's not forget Carmen was a BloomKlein Operator as Region 8 head then deputy chancellor after Diana Lam and sat at Klein's right hand until she was pushed out - which she was - they told her she did not have the skill set for the job. So since she defended those policies for years why expect anything different? Well I did - but shame on me for not going with my instincts. Leonie Haimson was right on the Carmen case from Day 1 - saying she was embedded with the old Anthony Alvarado ideology of District 2 that Klein borrowed so much from. Leonie is so much better than any union leader we've had.

Time for Bill to cut his losses. She's doing nothing for anyone. It's like Walcott and Bloomberg are still ruining the schools. I would actually say its worse because of cell phones and no suspensions. When the Supreme Court makes dues optional and Bill is voted out we're all toast.