My Reflections Of Summer School. 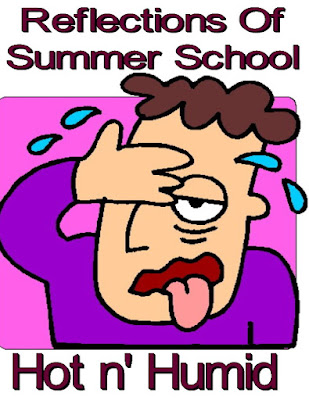 I taught summer school this year and while the students were for the most part, well behaved and cooperative, I did find some real issues how the summer school program was run.

First, the summer school program included 6 high schools and there were more administrators in the building than  teachers!   Talk about a waste of money!  How much money was spent on useless administrators that could have been spent on school supplies like copying paper, pens and pencils, paper clips, and folders?

Third, despite all the administrators, students were walking the halls throughout the day.  Some students only showed up to get their metrocard and breakfast and/or lunch in the cafeteria.  These students didn't bother to show up to class and the school never cancelled their metrocard or cafeteria privileges.

Fourth, few school supplies were given and no copying paper were supplied.  The office copying machine was off limits to teachers.

Fifth, all teachers were observed twice.  That's right twice!  Instead of the usual once.

Sixth, during Regents, despite the numerous administrators, students were walking the halls three, four, or five strong and some were going into the staircases, out of sight and who knows what they were doing?  The bottom line, I saw numerous violations of Regents protocol in the hallways.

Finally, grading the Regents lasted a day longer than necessary because the summer school did not call in additional proctors to relieve the teachers to grade.  Moreover, the teachers had to proctor the entire test. no breaks, no second proctor.

The bottom line, this year if you taught in an non-air conditioned classroom, was not supplied with adequate school supplies, and  proctored the entire Regents, now you know why its called "blood money".
Posted by Chaz at 9:47 PM

During the regular school year, the assistant principal punches her time card a lot more than the teachers. The administrators hog up all the extra per session.
No one is going to do a lot of work in an overheated stuffy classroom. It's such a waste.
Enjoy the rest of your summer. Go someplace where it's cool and pleasant.

At least you had the option of teaching. The newbies at a school I was in were told to do summer school or no tenure. Many of few veteran teachers left have the opportunity to work per session and/or summer school, which they do to help their pensions. For most ATRs that venue has been closed. Those kids in the stairwells and restrooms were using their cellphones, not that it mattered. If you handed them the answer sheet, you'd still get a fifty percent failure rate.

I work at Target part time. Although the pay is a lot less, it is nice to make some extra pocket change, be treated with respect by my managers(principals and aps could learn a lot from my supervisors at Target), park within 30 seconds of entering the lot, using clean bathrooms where the toilet paper doesn't suck and be home 10 minutes after my shift ends.

did i mention that i don't get blamed for everything that goes wrong?

I actually would work at target and quit the doe if the pay were the same.

We will all be going back to school soon. I'll be going back as an ATR again, like I was under Walcott. We have a chancellor who has been in office who could end this situation overnight by using unit funding, but chooses not to. Most of Bloombergs people are still in place, as is this especially odious policy. I no longer support her as chancellor. She has done nothing. She has allowed the previous administrations policies to remain in place and has not even changed the illegal ones. She should resign. She is a big part of the problem with our schools and with DeBlasio's nosedive.

I taught one summer at a high school in Brooklyn. This was the summer where it was so hot, that summer school was closed for a few days, but teachers and administrators had to show up???

Anyway, we were also observed twice during that summer- it was so hot in the classrooms ( no air conditioning, only those old , noisy DOE fans), that many of the students were suffering ( as we were) from the heat, and had their heads down on the desks from exhaustion. Wonderful scenario for an observation, right? I was observed by an AP in that school who only came out of her air conditioned office to do observations, and wanted to know why so many kids were inattentive. I told her why( we measured the room temps- it was 200 degrees, between the heat and unrelenting sun pouring in through the unshaded windows in my room.).

The AP wouldn't buy it. After that experience, I vowed never to work summer school again. The school has since been closed by the Bloomberg administration, and was chopped up into smaller schools.