The DOE, Thanks To The Union, Is Achieving Their Goal To Terminate ATRs. 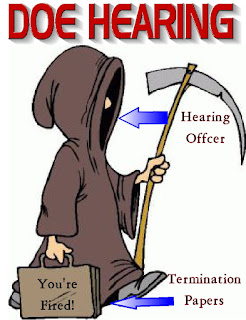 When Carmen Farina became Chancellor of the New York City Schools one of her priorities were to drain the ATR pool and eliminate the over $100 million dollar annual drain on the DOE budget.  She said all the right things like getting the ATRs back into the classroom and encourage incompetent teachers to voluntarily leave the profession.  To achieve this goal she authorized an ATR buyout in 2014 where all of 91 teachers (most were retiring anyway) took the inadequate buyout offer.  Failing that, the Chancellor changed her tune about ATRs and she not only retained the worst aspects of the Bloomberg/Klein policies but made them more punitive when it came to the ATR pool.

First, despite promises that there would be a new tone at the DOE, Chancellor Caren Farina retained 80% of the DOE policymakers and failed to change the school based "fair student funding" formula.  The one major change that needed to be made to encourage schools to hire the experienced teachers they require for better student academic achievement.  Instead, this destructive formula penalizes schools who hire highly experienced teachers and improves a school's budget when they hire clueless "newbie teachers".  In other words student academic achievement is less important than the school's budget.

Second, under Carmen Farina, all ATRs now have field supervisors whose job is to thin the heard and thanks to our union, they now can recommend termination to the Superintendent which will result in 3020-a charges.  More of this later.

Now,  thanks to our union, the DOE has proceeded with 3020-a termination hearings on ATRs who were given unsatisfactory observations by field supervisors and unfortunately. two consecutive unsatisfactory ratings by field supervisors are resulting in ATRs being terminated.  Yes, despite being in a strange classroom where the teacher does not know the students or have ownership of their grade, the ATRs are being "U rated" and losing their livelihood.

While the blame lies squarely with the DOE and Chancellor Carmen Farina, the union is complicit with this travesty that has befallen the ATRS and the union leadership should be voted out of office for their failure to protect their most vulnerable members, the ATRs.  When you vote remember what the Unity caucus has done to make the life of the ATR a miserable experience.  You can read it Here.
Posted by Chaz at 9:15 AM

The only thing that will change this are lawsuits against the DOE - it's the only thing it respects. Just like the recent case in which VAM was denied as a tool to terminate, ATRs will have to sue. The UFT and Mulgrew should be filing these suits. Mulgrew works for Farina, not us. He's on the wrong side of the fence on everything - we have an opportunity to vote him out, do it!

Farina is too powerful because of her special relationship with Mulgrew. Vote Mulgrew out, and call Senator Terrence Murphy 914-962-2624 to describe your teaching experiences. He has to decide whether or not to extend mayoral control.

The union is a wreck. Look at the question that teachers are asking now about these mystery professional hours. Did we get anything from our union with specific guidelines like who does this apply to? When is it due? How many hours? Where do we send it? This is a disgrace that teachers don't even know about these mystery hours. Chaz do you know anything about this? I'm a 20+ year tenured veteran. Do I need to do this crap? The union cannot answer me.

Yes, vote Mildew and his toady LeRoy out. Chaz have you forgotten his statements against us having a chapter?

Actually, Leroy Barr is the real power inside the Unity caucus and his institutional memory of the inner workings of the union would be an asset for any new caucus who takes charge.

That assumes a new caucus will take charge and that he would be loyal to it. I wouldn't trust him or anyone in the upper echelons of Unity or New Action.

I wish Mulgrew and Farina would just elope. A modern day, Owl and the Pussycat. DeBlasio should sail away with them to perform the ceremony. What a trio!

He is part of the corruption too.

Custodial engineers just finalized a tentative contract with a $10,000 signing bonus. UFT's got only $1,000. Mulgrew must go!

ATRS are safer than regular teacher for the record. ATRS CAN SUE ON 50 DIFFERENT FRONTS IF THE doe DARED TRY TO FIRE ONE. REGULAR APPOINTED TEACHER WITH TWO INEFFECTIVES ARE GETTING FIRED ALMOST 100% OF THE TIME.

You are mistaken about Leroy. There is one boss at UFT. That's Mulgrew. There's no number two.

How many ATRs have actually been terminated due to U ratings from observations? 1? 10? 50? None?

I know of 3 ATRs who were terminated for incompetence this school year and there are many more with 3020-a charges awaiting their hearings and decisions. All because of being "U" rated by field supervisors.

I don't know where you heard that the school custodians & engineers got a $10,000 signing bonus. I looked for that info and couldn't find it. They receive a similar contract like the UFT. Here's the article: http://www.capitalnewyork.com/article/city-hall/2015/01/8559601/de-blasio-strikes-deal-school-custodians-engineers

However you do have the article about the $10,00 signing bonus, please post it.

I read a decision terminating an ATR. They went as far back as October 2012 lesson observation.

Chaz will be interesting to see if they get fired. They should be filing lawsuits ASAP bec the ATR process is joke and no judge would allow the DOE to get away with this abuse.

Just for my future, if I ever become a atr. What are the 50 lawsuits ?


1- different rating system
2- observed out of license
3-Lack of proper support for a "incompetent" atr
4-How can you have a lesson plan for a a schedule given to you on same given day?
5- Unfamiliar with students so how is that suppose to lead to an 'effective' lesson ?
6-Since we are not grading these students, what is the students' incentive to behave and accomplish work being taught
7-Why aren't atr's given bathroom keys and a place to store stuff as is required as per the contract for 'regular' teachers?
The list goes on and on...and a judge that asses these flaws in the atr process will not be happy. A jury will puke!