Teachers Vote That Chancellor Carmen Farina And Her DOE Managers Are Not To Be Trusted. 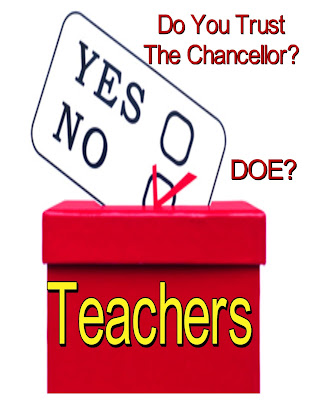 In the school I have been assigned to we had an uneventful Professional Development (PD).  However, there was one part of the PD I found very interesting.  A question was asked by the trainer.  The question was "Do you trust the Chancellor and the DOE in making the proper decisions to help the school"?  I had expected the vast majority of teachers to keep their hands down,  However, not one teacher raised their hand, even the "newbies"!  While I admit this is a very small sample and only one high school.  I bet if this vote was done citywide the teachers would vote over 90% against trusting the Chancellor and her acolytes at the DOE to do what's right for the schools.

Why do the teachers feel this way?  There are many reasons, the continued excess paperwork heaped on teachers, the many "gotcha" administrators that rather confront teachers than collaborate with them, the punitive Dainelson rubric and the asinine student growth metric used to unfairly evaluate teachers. Then there is the many bad principals that the DOE protects despite there terrible leadership and let's not forget how the DOE sucks up the money while essentially keeping school budgets frozen at less than a 100% of their fair student funding.

If the above issues aren't enough?  How about the DOE's policy of going after senior teachers for incompetence, despite the fact they only had one year of "ineffective" ratings!  In one such case a teacher received an "ineffective" rating back in 2014-15.  However, she worked hard and in the 2015-16 school year raised her grade to "developing" for both the observation and her testing components.  This did not stop the DOE from filing 3020-a charges this school year. There was a similar case where a senior teacher received a "developing" from a validator and still was charged under 30200-a and was terminated.

Finally, the DOE still treats the ATRs as unwanted teachers and with one hand offers schools an incentive to hire ATRs, while with the other tries to get their field assassins to terminate the weaker ones.

I can only snicker when I hear our UFT President tell us that there is a different tone at Tweed when for the teachers in the trenches its still the same old song. They continue to be the enemy and not an organization that supports teachers and the vote shows that.
Posted by Chaz at 6:08 PM

The DOE/UFT is very worried about David Suker's case. It's the sole reason they have offered ATRs free and let the last ATR agreement expire. This is to prove that everything possible has been done to get ATRs back in the classroom, in case a precedent opens the flood gates of law suits. ATRs that survived their 3020a are going back into the classrooms, as the ATR pool is punitive - not only to those who went through termination hearings, but also for all those ATRs whose only crime is being middle aged and at top salary.

Carmen Farina overturned the teachers in her school by a huge amount when she was a Principal. She touted this fact as a major achievement, when it just shows she doesn't know how to grow highly effective educators with professional development, modeling personal and professional reflection,etc. Her strategy was to get rid of them.

This is one reason why many don't trust her-because her rhetoric is hollow.

Hundreds of teachers that have masters and post-masters degrees, have passed 3-5 NY State tests and often have PhD's in their content area are horrible? REALLY?

Or is the NYCDOE horrible?

I guess when AP's and Principals that are certified in Phys Ed or Spanish are observing 11th grade Physics or Algebra, obviously we know their feedback is bullshit.

What ever happened to the annual DOE survey question when they asked teaches if they trust the chancellor? If memory serves me correct, 2 years ago they never published the results of this one particular question and last year that question was not even on the survey. Anyone have more info on this to help refresh my aging memory? (The survey I am talking about is the annual school survey that is filled out by all teachers, parents, and middle/high school students)

What ever happened to the annual DOE survey question when they asked teaches if they trust the chancellor? If memory serves me correct, 2 years ago they never published the results of this one particular question and last year that question was not even on the survey. Anyone have more info on this to help refresh my aging memory? (The survey I am talking about is the annual school survey that is filled out by all teachers, parents, and middle/high school students)

This going after perfectly good teacher nonsense has completely demoralized the staff at my school. The previous administration conducted a reign of terror, firing three teachers for no reason at all, really. They scared the staff so bad their first year in the leadership position that we had an 80% turnover rate as most teachers left.

Now we have a new set of admins who fired a teacher in June despite having better data than the other teachers in the department. They are 'true believers' in all that Danielson's/common core garbage and talk about it ad nauseum. Oh, should I mention all three of our admins are third worlders (doing the jobs that Americans won't do, I guess).

Chaz - I'm putting out an ed notes at the del ass tomorrow -- can I use parts of your blog post - I'll include the link.
Norm
--

Of course you can Norm.

Can't wait for these school snapshots to come out from June 2016. Can't wait to see all the great results from my school who spent hundreds of thousands on consultants to assist. Going to be so embarrassing when the numbers show decreases.