Why Does The DOE Continually Violate The ATR Agreement? 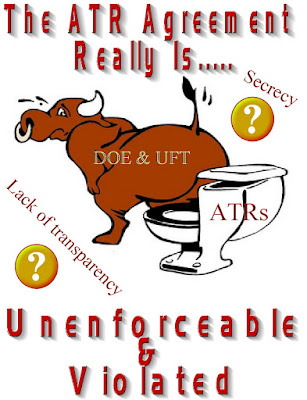 Last week I received a change in my assignment and was sent to a middle school, despite the fact the ATR agreement plainly states that rotating ATRs can only be placed in their district.   My district is District 77, Queens high schools, and that is the only district I am required to rotate in.  Yet the DOE continually violates the 2011 ATR agreement and tries to dump ATRs outside their district.

Luckily, I contacted Michael Sill and Amy Arundell who swiftly contacted the DOE and over the weekend I received a revised assignment to a high school in my district.  The question I have for the DOE are the following:

I cannot say which of the three above questions apply, maybe all three, but if you believe you are placed out-of-district, please contact Michael Sill of Amy Arundell at UFT headquarters as quickly as possible and explain why the placement is wrong.  If the DOE does not place you in your correct district by Sunday night, report to your last school until the proper placement is assigned.  Do not simply stay home!  Otherwise, you will be marked absent without cause.

Speaking of the ATR agreement there are two other issues that need to be clarified.  First, the ATR incentive may have a hidden condition that wasn't explained by either the DOE or the UFT.  I have been informed that the first year of the ATR incentive is free for the calendar and not school year.  Meaning that schools will wait till the second semester to pick up ATRs since they can get the ATR for free for both the second semester of this school year and the first semester the next school year.  The same goes for years two and three when they get the ATR at a reduced cost.

Another hidden condition is that the school would still be responsible initially for the ATR salary and get reimbursed by the DOE which is a disincentive for principals who are on a tight budget and are reluctant to shell out up to $54,000 in salary for the second semester and hope the DOE will pay them back at the end of the school year.  If this is true, I see many principals deciding against hiring ATRs for their vacancies.

Finally, does the realigning of New York City licenses with New York State licenses allow the DOE to use it as an end around of the ATR Agreement and put high school teachers into middle and elementary schools?  Will the UFT allow it?  I certainly hope not as the DOE will most certainly take advantage of this and abuse the ATRs even more than they do now.

Remember, the ATR information meeting is scheduled tomorrow at 4:30pm at the Queens UFT office.  See you there.

Update:  Amy Arundell has clarified and corrected the issues dealing with the ATR incentive and the license expansion.  According to Ms. Arundell the DOE came up with the ATR incentive to try to place ATRs in permanent positions since schools are being paid for the vacancies anyway and it makes little sense for principals not to hire the ATRs for these paid for vacancies,  unless they have ideological motives that only hurt their students who end up with no teacher.

As for the license issue?  Amy states that it will not affect the placement of ATRs in their district.  The DOE cannot force place an ATR outside their district without the ATR's approval, even if his or her license now allows for them to be placed in, for example, in a middle school if they are a high school teacher.

Amy also informed me that the DOE's assignment to a middle school was a "computer glitch" doe to a new computer system and new personnel. In other word the DOE showed their incompetence and carelessness in not checking to see if the placement meets the 2011 ATR Agreement.

Good post Chaz. As an atr excessed from district 25 I am sent all over queens. 1 rotation may be in far rock and the next in Long Island city. I've been all over queens in the last 4 yrs. I also thought the change in our certification license was done to screw atr's, I might be paranoid but you never know what's in the mind of the doe

The willful withholding of information by the UFT and the DOE? The changing of certain licenses to include all grade levels? Current ATR negotiations that were announced like some errant gas by Mulgrew during a flyby Executive Board meeting. We need real representation from our union.

Age Discrimination Lawsuit. Best wishes to every ATR for restitution.

The ATR's can't figure out how to unite and form a class action suit. They just can't figure it. People have been ATR's for over 5 years, some over 10. Hire a lawyer already!

Would it not be great if every suffering ATR would be awarded hundreds of thousands of dollars in a age discrimination law suit!!!!! Millions of dollars coming our way as this is the most blatant in your face bull shit anyone could ever imagine. We live in a politically correct world and the DOE is the biggest proponent of "political correctness" however in the ATR situation they seem to have forgotten about the correctness...only when it involves people who are not citizens here in our country do they respect political correctness.

Answer to your headline question.
"Because they can as the UFT is in collusion with the DOE"

Let's stop talking about a lawsuit and get together and have a class action suit. We have a case. We need to organize.

That update sounds contrived and fishy. I hope for all our she's being truthful. She may have jumped at the opportunity to help you to quell your critical voice.

I work in a really hard school. The admins drive us hard and treat us poorly. I think I would prefer being an art sometimes.

So even with the incentive ATRs are not being hired (at least by any measure of statistical significance). Why the change in license? So you can't go out of district, but you can bet they'll be placing ATRs out of grade level in their district, now that the license was changed. Also, high school teachers don't have districts, they have their entire borough.

Chaz Recently there was a reclassification of social studies license from high school to grades 6 to 12. Article 10 has excessing for license areas but this new classification may be interpreted by the DOE as within their right to assign you within the district including I.S. schools. I am guessing but maybe that is what is happening. Either way it looks like a violation of existing contractual language.

I would love to see a wikileaks for the DOE....now that would be interesting.

So if I was originally excessed from district 15 as a common branch teacher, teaching in a middle school, should I only be assigned to elementary schools in District 15 or can I be sent to middle schools and high schools as well?

so if I hold a common branch license and was originally excessed from district 15, I can only be placed in elementary schools in district 15? or am I misunderstanding?

Chaz I was curious to hear your thoughts on where you believe public schools will be ten years from now. Any thoughts? Thanks from an atr reader and comment poster who survives lonely days at libraries and teacher lounges reading the chaz post. Thank you.