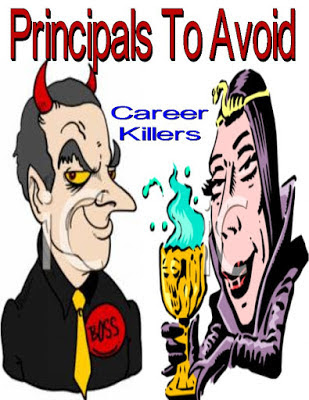 I must say that I am perplexed how Chancellor Carmen Farina selects Superintendents?  Be in Juan Mendez, Amiee Horowitz, and many others.  These Superintendents continue to hire principals that have questionable credentials and is it any wonder that students and staff are suspicious of the DOE's commitment to put children first?  Since I am only familiar with Queens High Schools, I will discuss two of them who have seen a change in leadership.

The first school is Townsend Harris, one of the top high schools in the city.  This year they were given a new Principal, her name is Rosemarie Jahoda, a refugee from the Bronx.  Want to know about her you ask?  Well here goes.  Rosemarie Jahoda was the Assistant Principal of Math at Bronx High School of Science and was a villain, according to the Math department teachers.  20 of the 22 Math teachers in the department signed a complaint of harassment in 2009,  Teachers accused Ms. Jahoda of verbal abuse by being admonished in front of their students and threatening their jobs.  You can read the article Here.  Moreover, you can read a first hand account of Ms. Jahoda's handiwork by ex-chapter leader Peter Lamphere, who won two "U" rating reversals by her.  His account is Here.

Now it seems that Ms. Jahuda has made enemies of the students and staff at Townsend Harris as she has told the teaching staff not to drink coffee or water in class and discourage the students as well.  Furthermore, she has demanded that the teachers assign more homework to the student's already heavy workload.  Finally, she threatened to cancel the senior trip if she doesn't get her way.  Today the students struck back by walking out of class and organized a "sit in" in the hallways.  The Deputy Superintendent showed up and pleaded in vain for the students to return to class. You can read the article about it Here.

Ms.Jahoda is trying to change the humanities  culture of the school by imposing a specialized test for admittance to the school and changing the school's mission to that of a STEM school.  Townsend Harris is an elite high achieving school in the city and is a school that has a reputation to graduate well-rounded Ivy League caliber students.  What idiot would change that successful approach ?  It appears Ms. Jahoda does.  A petition to not appoint Ms. Jahoda as permanent Principal has over 3,000 signatures consisting of students, staff, and alumni and is being sent to the DOE. let's hope they listen.

At Forest Hills High School Anthony Cromer took over as Principal on December 1st.  Who is Anthony Cromer?  He was the Principal at August Martin High School until he was pushed out in April of 2012 as he oversaw the continued academic decline of the school, as he hired and relied on uncertifed teachers to teach Regents caliber courses with disastrous results.  Mr, Cromer's claim to fame in my book, was when he forced the Living Environment teacher to teach Earth Science and the Earth Science teacher to teach Living Environment and then "U" rated them both for poor student performance.  "U" ratings under Principal Cromer  was not an isolated action, it happened far too frequently at August Martin.  Now he is Principal of Forest Hills High School and that is unfortunate for the students and staff of this great school.

Great schools need great leaders and not these two flawed educators who have harassed and "U" rated staff far too frequently if you ask me.
Posted by Chaz at 6:49 PM

Seems we don't have to worry about Trump's choice for Education Secretary- not when the DOE is destroying excellent schools from within.

Not educators but bullies,sadists and morons.

Off topic question: My friend was talking to his mom. His father died young 40+ years ago but was a DOE employee and UFT member. He wasn’t in the system long (maybe 5 years, if that). Mother never was in contact with UFT. Should he have received a pension (and shouldn’t his mom still collect it)? I mean maybe $200 a year, but we are curious if you know any rules about it. Any penny helps.
Thanks in advance.

The math teachers at Bronx Science felt so strongly about their AP, they went and testified against her after they retired. Many live upstate and in NJ but made the trip and spent the hours to help those left behind. Nothing was accomplished. The DOE sided with her and the Principal.

Is this the change of tone we were promised? Principals destroying schools and careers of experienced teachers.

Really disturbing. So many of these principals, only time something is done is when the media becomes involved.

I agree with Anon 9:15pm. Kinda hard top point out why charter schools do bad when the DOE intentionally torpedoes schools with awful principals. Guess someone at Townsend pissed off the DOE. sad for the kids because it won't be long till it becomes a failure factory, then we will all get to read in the Post, Daily and Times about how the teachers suddenly became bad.

I got 34 hours of per session this current two week period. Sometimes I remember that the DOE doles out so much per session because it's cheaper than hiring new teachers to cover those services. Long pondering however is a luxury a harried teacher can ill afford! Then it's back in the trenches and the churning monster continues its lumbering crawl to the finish line.

What is the UFT doing? Nothing?

Did either or both of these prize principals graduate from the Leadership Academy?

Did he of these two principals graduate from the Leadership Academy?

Townsend Harris HIgh School is far from perfect.
The staff is afraid of what the new principal will uncover!!!!!
There are many problems and no one wants to fix these problems.

They will start targeting the older teachers that resist that nonsense.

More older teachers are going to be tatgeted.