The Legacy Of Michael Bloomberg Continues, Thanks To Chancellor Carmen Farina. 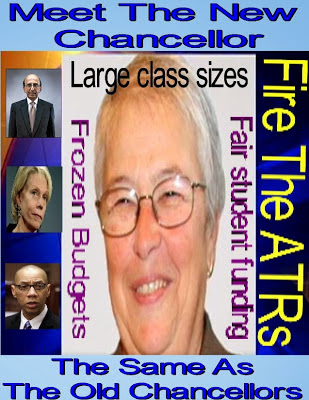 Before Michael Bloomberg became Mayor of New York City, the teaching profession was treated with respect, even if the previous Mayors weren't especially thrilled with the UFT's demands at the negotiating table.  Principals were long-term teachers who gradually found themselves as administrators and, for the most, part collaborated with the school staff.  The Chancellor was an educator and worked with the schools to ensure they had a solid core of veteran teachers while the DOE funded the school staff based upon units and not salary to ensure the principals could hire the experienced teachers, who mastered classroom management and had deep curriculum knowledge.  This allowed the school to keep a stable teaching staff and teacher turnover remained low.  Struggling schools in deep poverty communities were kept open and provided with additional services to help the schools, with mixed success and their was no ATR pool as excessed teachers were given a list of vacancies in their district to select before principals could hire outside the district to fill their vacancies.

Fast forward to the Bloomberg years and everything changed for the worst for teachers.  First, school funding was changed from units to salary and was dumped upon the school budget.  The result was that principals, were encouraged to hire the "cheapest and not the best teachers" for their schools. Moreover, under Michael Bloomberg, 162 schools were closed and few veteran teachers were hired from the closing school as the "fair student funding" (fsf) penalized principals financially from hiring them.  The result was a pool of excessed veteran teachers called the ATR pool that ranged from 1,000 to 2,000 yearly.  To make matters even worse, the fsf for each school was not fully funded and in 2010-11 school year was only 82% of full funding. The exceptions were the Bloomberg small schools who received 100% and some as much as 150% of their fsf. What other negative changes did Michael Bloomberg impose on teachers during his tenure?  Here's a list"

I'm sure there are others but you get the idea.

If we are to see real improvement in the schools then we need to get rid of the destructive Bloomberg policies and the Chancellor along with it.

DOE and Carmen Farina are gaslighting the teachers of NYC and the entire teaching profession.

Mulgrew, the personification of the UFT, loves Farina. He has done nothing to change her views or perception. Actually, she has influenced him to discriminate against ATRs, with the clause in the last contract that expired. The UFT didn't allow the provision to expire because it was misused by the DOE, they allowed it to expire because of potential damning FOIL information that proves collusion and discrimination.

Bloomberg left us all holding our prks in our hands and now this midget mike or little mikey as trump calls him is off to the utopia life he envisioned. Boy oh boy it really ia a shame that farina has kept the midget mike gotcha squad at tweed. Why hasnt farina "drained the swamp"?..The swamp still smells like shit at tweed and farina needs to rid them fast because he comes betsy devos and her vouchers.

Interesting to note that if the vouchers and private schools as well as charters start siphoning students from public schools the doe is going to look to lay off people, the ATRs will be the last ones to go and ALL the no nothing newbies will be out the door. All the newbie asst principals who are smucks will be walking with their boots. tHOSE BOOTS WERE MADE FOR WALKIN.... GO ATR BABY.

These campus high schools are HYSTERICAL!!!!! It was so much more fun with school spirit and energy as one large neighborhood school. Now it's a total shit show with 6 schools where the principals HATE ONE ANOTHER. It's so sad. They can never fix this because there's just way too many administrators. They have rights too.

And Mulgrew and the UFT too.

Irrespective of the Charters and private schools, so many are leaving the DOE anyway for obvious reasons

The whole system is coming down.

She and the mayor are big disappointments for allowing bad principals destroying careers of experienced teachers, and our schools.

Any news on how the DOE/UFT are screwing us with the new evaluation talks?

Wonder how the DOE and UFT will screw us in the new observation talks.

They will make it easier to rate teachers ineffective.

They are all in the destruction business.